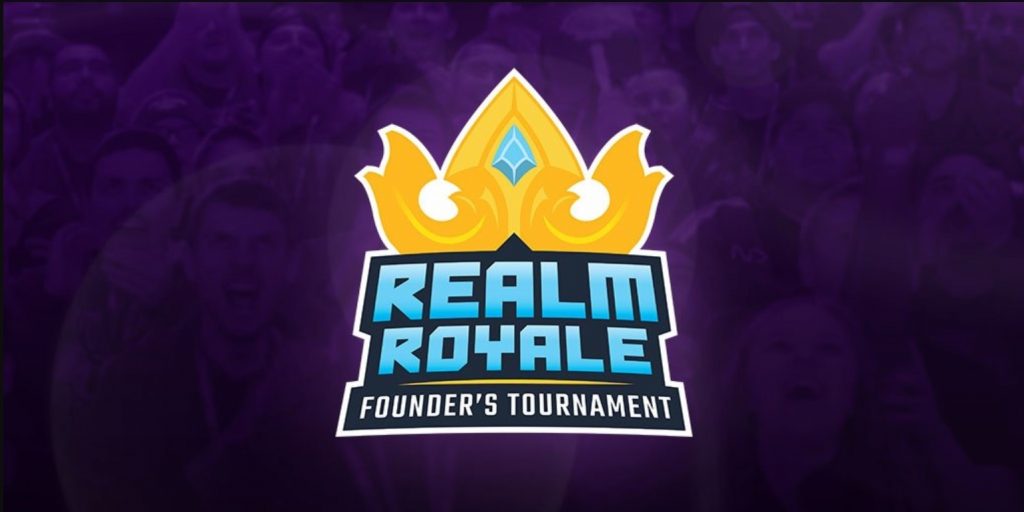 Hi-Rez Studios surprised fans at DreamHack Atlanta with a pop-up $25,000 Realm Royale tournament. What nobody expected was the mess it would become.

“So there’s a lot of things about this tournament that were already screwed up,” said competitive Overwatch Contenders and Realm Royale player Brian “Kephrii” St. Pierre, who competed at the Realm Royale Founder’s Tournament. “No one knew a $25k was happening and then all the tickets were sold out so, if you wanted to compete, it was only people already here who could compete. Then it was Open Qualifiers, so a lot of people were just upset in general.”

If you are at #DHATL18, there is an OPEN tournament starting at 1:00 PM for @RealmRoyale. Anyone at Dreamhack can play! $25,000 on the line. Sign up at the RR play stations! pic.twitter.com/5lbUpuERpH

The tournament drew the likes of Kephrii as well as several notable Overwatch players such as Kephrii’s Realm Royale partner TSM Gale Adelade and Houston Outlaws Lucas “Mendokusaii” Håkansson. On Friday and Saturday of DreamHack, open qualifier matches ran throughout the day, allowing 40 duo teams to compete in each game. The top 40 teams from qualifiers then moved on to the “Realm Royale Founders’ Tournament Grand Finals” on Sunday.

But the issues that arose with the tournament didn’t solely circle around the delayed announcement– once the tournament began, problems arose the moment a player sat down to compete.

Playing with keyboard on my lap so I have a little desk space @Boostio_OW pic.twitter.com/Dx681rkpS2

“There was no desk space, that was brutal,” said Kephrii. “The monitor stands moved so far forward that you had to turn them sideways in order to let you move your keyboard completely crooked to give yourself room for your mouse pad. Essentially, you’d have to bump into someone else’s space. The keyboards couldn’t even fit side-by-side. And some of the tournament monitors were actually 2K monitors, so if you sat in Row 3 you’d be on a 1440p resolution instead of a 1920×1080. Some people had 2K monitors instead of 1080.”

Space wasn’t the only issue. Kephrii went on to describe the sound issues that plagued every team in the competition. As it turns out, in-game comms were non-existent this tournament and Hi-Rez expected players to utilize Discord for their comms. Something, Kephrii notes, was not communicated to the players. “In the Friday and Saturday qualifiers, nobody knew to use Discord so we had to qualify with no in-game voice comms. Gale and I had to take our headphones off to talk in-person and not hear footsteps.”

This is where it gets extra muddled. A lack of proper sound-cancelling headphones and rules to enforce their utilization, which is a standard across the majority of team-based esports, was made a major problem in this tournament. Pair this with the lack of space, resulting in tilted monitors toward other players, and there was already ample opportunities for players to cheat, or at least utilize the issues of other teams to their advantage.

But why stop there when you can see the entire map of players on stream, without delay, right above your monitor?

Imagine being @RealmRoyale and hosting a $25,000 Tournament where the main spectator POV and IN GAME MAP are on display IN REAL TIME with NO DELAY, right in front of the competitors. I was advised by admins there will be NO CHANGES OR DELAYS added. pic.twitter.com/D29swhL6KP

“I won’t say a team was stream sniping,” Kephrii first clarified. “I don’t ever want to go on record and say, “I think somebody was cheating.” That’s not my place. I don’t know for sure so I can’t say it. But we got rushed in a house and I was like, “Damn, how did they know we were here?” Gale just said we must have been unlucky, they played smart.

“But then I’m sitting there and I’m looking up from my monitor — if you look at my pictures that I uploaded on Twitter — it was literally above the frame of my monitor. It was right there. So I looked at it, and I looked at how many were alive versus how many were alive on my spectator client to view the guy who I just died to and it was the exact same. So then I looked at the timer and the timer was the same. There was no delay. So I said, “Gale, there is no delay.” He said, “Wait, what do you mean?” Then he looked up at the screen and the screen — they had two screens for spectator and the map right in the middle — the screen was on the whole time.”

Kephrii and Gale immediately went to Hi-Rez with this tournament-breaking revelation. Once informed, the Hi-Rez employee Kephrii first interacted with immediately ran to try and figure it out. Kephrii, knowing this was an issue many up-and-coming esports might try to sweep under the rug, immediately shot out a tweet explaining the controversial problem that could compromise the integrity of the tournament.

“After that, another Hi-Rez employee comes up to me and asks why I tweeted that, then said to give them a minute and they’d fix it. I said, “Well [another employee] just came up to me and said the tournament admins aren’t going to change anything, they’re just going to keep it how it is and they can’t change it.” And so they said to give them a few seconds because that was unaccepted. So they run over to the tournament desk, tries to fix it, then comes back to me and goes, “Okay, actually, you’re right. They aren’t going to fix it. Honestly, just tweet it. Make them fix it.””

At this point, Kephrii’s high profile on social media had earned the attention of many people watching the Realm Royale tournament stream and things started to get a bit heated. Chat on Twitch began questioning the mods, tweets were flying and, as more insight was released by Kephrii on Twitter to his audience, the fan base grew louder: There was a problem that demanded to be fixed. The mods, unfortunately, did not handle the challenges from their Twitch viewers well. “If kheprii was taking advantage of it he wouldnt be 20th,” said Realm Royale moderator Azenis_. “We’ve been down in the area and if the player is focused on playing it shouldn’t be a problem,” said fellow mod neiya_. This was not received well by Kephrii, the viewers, and fellow competitors.

LOOOOOL. I AM DEAD. pic.twitter.com/a90Xt25OTI

“So, after that, yet another Hi-Rez employee comes up to me and goes, “Hey man, if you keep tweeting this stuff then I’m going to have to ask you to leave.” I said, “I can’t stop tweeting this stuff because it’s happening. People have to know about this. This isn’t acceptable with money on the line. This is unfair. This should have been dealt with. Realistically, you should have immediately shut down the stream, restarted round one, and discarded all of those scores just because someone could have cheated.” And they said they were fixing it and I just had to stop tweeting about it.

I told them they weren’t really fixing it– what they tried to do to fix it was to hide the screen until you finished dropping, then the screen popped back up. But that doesn’t change anything since it’s still real time and I can still watch. I told them it wasn’t fixed and I had to keep tweeting about it until it was fixed and they just said, “Well then, I’m going to have to ask you to leave.” So we got up and left before round three even started. Gale and I just left.”

I was advised by @RealmRoyale if I continued to tweet I would be removed from the tournament. I said I wouldn’t stop tweeting about it. @Gale_Adelade and I are officially out of the tournament.

With Twitch chat on fire and Twitter blowing up, the tournament began winding down– nearing the end of a PR nightmare in the making for Hi-Rez. But the fires were never extinguished by mods and Hi-Rez employees, only fueled further.

Before departing, Kephrii asked a simple question: Where is the nearest referee? Once pointed out, Kephrii noted that said referee was from a paid staffing company and said, “That guy’s not looking. He doesn’t even know what he’s looking at– he doesn’t know the game. This isn’t a referee, this isn’t anything.” To which the Hi-Rez employee said, “Well, we’re watching and we’ll be disqualifying anybody that turns around to look at the screen or looks above their monitor.”

Twitter remained radio silent from other teams save one, who claimed there was an issue with LAN connections during the Grand Finals, but no mention of this potentially tournament-breaking scenario was uttered. According to Hi-Rez employees on Twitter, however, they disqualified anyone who was caught looking up or otherwise away from their computers.

At the time of writing this article, no teams had come forward or posted openly about being disqualified for any reason.

Kephrii had no reservations about leaving the tournament’s unfair environment– in fact, he’d stopped playing the moment he realized what a benefit those facing the spectator area truly had. “It was a lose-lose scenario,” said Kephrii. “If I was to win the event fairly, without looking, people would still think that I’d cheated and I’d looked at the screen. So there was no way to win the tournament without looking like I’d cheated and, as a competitor, I felt like everyone should have said something because nobody wants an unfair advantage to be possible.”

Perhaps the biggest foot-in-mouth comment from this scenario came from Heroic Leap Games (the Hi-Rez development division for Realm Royale) Drybear, who said the following on Twitter:

There’s a logistical challenge in preventing 80-100 people from seeing a broadcast screen. We had many admins walking the rows and disqualifying players who turned around or lifted their heads. That said, we have a lot notes to improve on for next time!

There were many potential solutions to this issue if forward thinking had been implemented. A stream delay could have been utilized or, for a more physical solution, opaque curtains could have been set up to block the view of players from the controversial screens. Even setting the desks up perpendicular to the monitors, meaning each player would have to actively turn their head sideways if they wanted to cheat, could have led to better rule enforcement throughout the Grand Finals. But, even before that, ample space could have also been planned to allow players to properly utilize desk space without risking turning their monitors toward their opponents or otherwise impeding on fellow players’ spaces.

To have these issues be called out publicly and be met with Hi-Rez employees encouraging then condemning Kephrii’s tweets shows a potential lack in proper event management. Further, it shows a lack of unity from the Hi-Rez team; is transparency the key to a functional tournament, or should problems be swept under the rug as Kephrii had been concerned about? Hi-Rez employees were not on the same page during this tournament in either rulings or moral standings and it showed. We reached out for a comment from Hi-Rez but, at the time of this article’s release, did not receive a response.

“My main goal in saying anything was because I cared about the competitive integrity of the competition,” said Kephrii at the end of our interview. “I could have just kept my head down, not said anything and abused the system and cheated for 10 grand.

“But I didn’t want to be that guy. I wanted someone to fix it so other people couldn’t cheat either.”

Other
Share
Kristine Hutter
Kristine is a Content Editor for Riot Games and Freelance Content Creator for several news outlets. When she's not neck-deep in gaming, you can find her playing with her Sheltie or Netflix and napping.