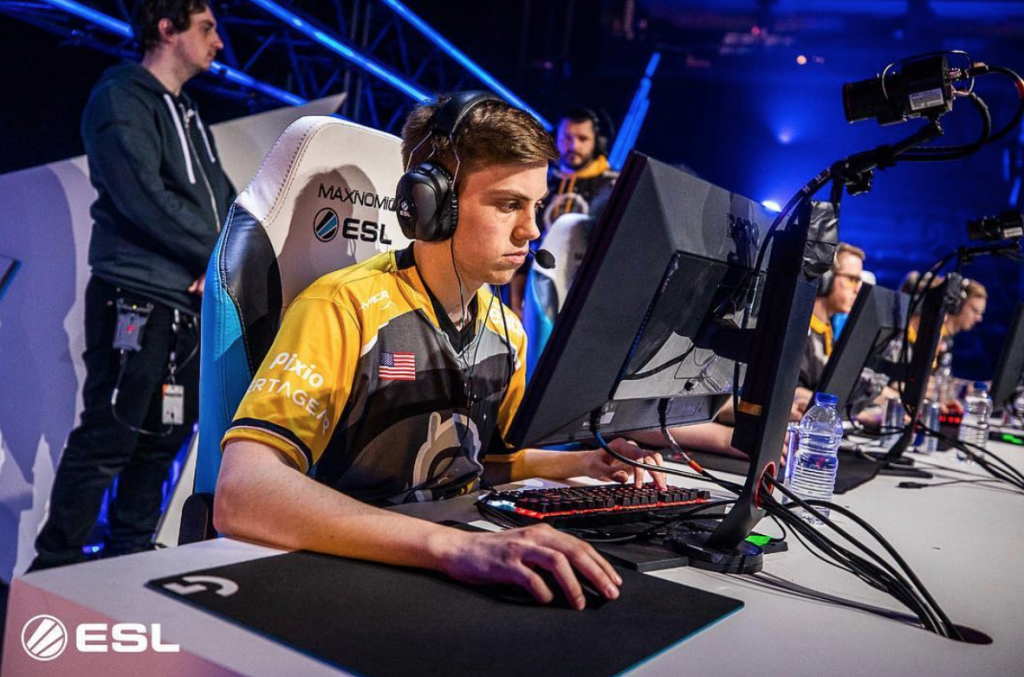 As the number one team in North America, Spacestation Gaming is one of the teams to beat at DreamHack Montreal. During their busy schedule at DreamHack Montreal, Troy “Canadian” Jaroslawski and Nathanial “Rampy” Duvall took some time to talk with Hotspawn’s Gillian Linscott about Canadian’s recent addition to the team, what it means to be a LAN event team, and why they are sick of playing qualifiers.

Gillian: Was it leaks or people suspecting Canadian’s departure from EG?

Troy “Canadian” Jaroslawski:  It was pretty much leaked. It was posted two weeks before I joined [SSG].

Rampy: Somebody posted an article about him wanting to join us. I don’t know what source it was.

Official statement from SSG regarding the @R6esports leak.

More information can be found on @BroCanadian at his twitter page. pic.twitter.com/fFmGg89BNB

Gillian: So I think the burning questions that fans and readers have is why the sudden move, Canadian? Why make the switch?

Canadian: Well, ’cause so I played with EG for four years with the same four guys. We were stuck. We had been in the same kind of area forever, and we only became more inconsistent. It just felt like if we’ve been at it for so long and we can’t get past this point, we need to change something in order to get there.

Gillian: And so you decided to make the change? If the team wasn’t going to initiate the change, you would?

Canadian: Yeah – for myself and for them. They want to win as well, and they all agreed. We didn’t know who needed to go or what we needed to change, but we knew something had to change if we wanted to win.

Gillian: And for you, Rampy, how did it feel when Canadian came over to Spacestation Gaming?1

Rampy: We actually weren’t planning on making a change. When we had the opportunity when he, Troy, approached us about being interested, then we’re like – well, this is a huge opportunity for us to get to this next step. ‘Cause we’ve always struggled to get past quarterfinals or even groups, and Troy is really good at IGL’ing and we’ve lacked in IGL since we’ve dropped [Taylor “Redeemer” Mayeur]. So we’ve been running a three system. So now with Troy, we felt like we can get to the next step. And this gives me an opportunity to roam with someone that’s been roaming for his entire career.

Gillian: And how has the synergy been with the team? Was it easy to mesh together as a team or have you had any hiccups?

Canadian: I think it’s been pretty easy. I think the only struggle we had was the fact that I was coming in and IGL’ing, and I didn’t know [SSG’s] strats. So, obviously, part of IGL’ing is that I need to be able to know the strats to call them. So, at first, I couldn’t call anything ‘cause I didn’t know what the strats were. That took some time. But as far as communication between each other and just playing off of each other, I think we were all really good at it right away.

Gillian: And how did you and the rest of the team find meshing with Troy?

Rampy: The only hard swap was getting [Dylan “Bosco” Bosco] to Thermite, but Bosco played Hard Breach for a little bit and he bomb-planted. So it wasn’t really a hard swap – it was just filling the gaps. And I went to Buck, and he took my Ash role. So then we, me and him, had to build a lot of chemistry since we were roaming together and working together on the entering. And that was probably the hardest part, just getting on the same page.

Gillian: Were there any embarrassing moments or funny stories from trying to synergize together?

Rampy: No, I don’t think so. I think everything’s been working really well. Even our first couple of scrims, we were really comfortable, and there wasn’t really many little mistakes.

Gillian: That’s impressive that there aren’t that many mistakes after having Canadian join so recently.

Canadian: I mean, there’s small mistakes here and there, but there hasn’t been anything really bad.

Rampy: Yeah, nothing drastic has happened in our scrims where it completely screwed us over. So it’s been a good process, that’s for sure.

Gillian: For DreamHack Montreal, have there been any moments of small mistakes or small moments where you can kind of see where you’re still trying to synergize together as a team?

Canadian: I think on every map we’ve played so far, strategy and overall macro team play, it’s all been good. Our only struggle was on that one map on Consulate where late round, clutch situations where it’s like two v two, three v two, two v one, that kind of stuff. We made some misplays, but that happens when the other team is hot. We’re pretty good at correcting them, though.

Gillian: And as far as prep goes for matches, are you guys going to go back and watch VODs for awhile? What’s your strategy for going in between these games?

Rampy: Yeah, we’re going to go back and watch some VODs, relax, eat some food and then just come back to work. Just do our job.

Gillian: And is there anything you guys do to get hyped up before a match? Any cool traditions or rituals?

Canadian: I don’t really think so. We warm-up and what not. But I think one of the really good things about this team is we come into the matches as if it was a scrim. Like we’re more prepared for it, but our intensity doesn’t change. We practice how we play in that sense. So I think it’s really good; the mood and the environment doesn’t change. Even when we lost that bad map today, the mood did not change whatsoever, which was really good.

Gillian: I was talking with the co-owner Shawn Pellerin and he said that you guys are actually a better LAN team than you are off-LAN team. Is that something you guys are working on changing? How are you better at LAN events than that you are online?

Rampy: So the game online just plays really differently because of ping. When people peek you, you can’t see them before they see you sometimes because of the ping. And our team’s really disciplined and patient. When we’re holding angles, they’ll just peek us. O0ur playstyle has to be a little bit adjusted online. But at LAN events, we’re all at the same ping so we see you while you see us. We’re just disciplined and have patience. Teams that are structured on LAN will win their games. Because the wild teams are so used to being able to peek and not get punished for it—here you do get punished for it.

Rampy: I think everybody knows that we play slow and disciplined and structured. I would say personally, out of all of them [at DreamHack Montreal], I think were the most structured team. We don’t be over peek, we do our job like that. Everyone knows that our flanks are watched. It’s perfect.

Gillian: It’s good to hear that your team has come together so well. Is there anything you’re looking forward to at DreamHack?

Rampy: I just focus on the event and just try to stay focused on the event – you know the goal of getting to grand finals…. I’m done with online qualifiers!

Rampy: [Canadian] hasn’t ever played in an online qualifier, and I’ve played in every single one.

Canadian: I’ve been lucky and qualified for all my LANS from previous results.

Gillian: So that’s why you came over to Spacestation Gaming! Rampy needed someone who would ensure SSG wouldn’t have to compete in online qualifiers anymore.

Canadian: Every time I watch other teams play [qualifiers], I’m so glad I don’t have to play them. It looks so stressful.

Gillian: Is there anything as an organization or a team that you’re looking forward to for the next little while?

Rampy: Bringing our season back for Pro League. That’s the mission. ‘Cause right now we’re in fifth. There were some games last half that we should won, but I think with the addition of Troy, I think we can actually bring the season back and push for top two.

Gillian: And what about you, [Canadian]?

Canadian: I just want to take things one game at a time and focus on the moment and winning. That’s really it….. The end goal of every year is being in the best possible shape for Invitational. So whatever we can to get that spot, whether it’s us winning here, whether it’s us bringing our season back, whatever the case, just taking things one game at a time, making sure we get that spot. Just constantly improving.

Gillian: As long as you keep that mindset, regardless of your outcome here at DreamHack, I’m sure that you’ll find success in the R6 competitive Pro League. Thank you both for taking the time to talk with me during your time at DreamHack Montreal.

Spacestation Gaming placed fifth-eight at DreamHack Montreal, taking home US$4000. Spacetation Gaming will next appear in the continuation of Pro League Season 10, on September 16, when they face Rogue.

Rainbow Six
Share
Gillian Langland
Gillian is Hotspawn's Communication Manager. She is also a lifelong gamer with a habit of getting distracted by random side quests, falling in love with fictional video game characters and forever buying wards as a position 5 in Dota 2. You can normally find her watching far too many Twitch streams to be human and rambling about esports community issues with a cup of coffee in hand.
Follow me