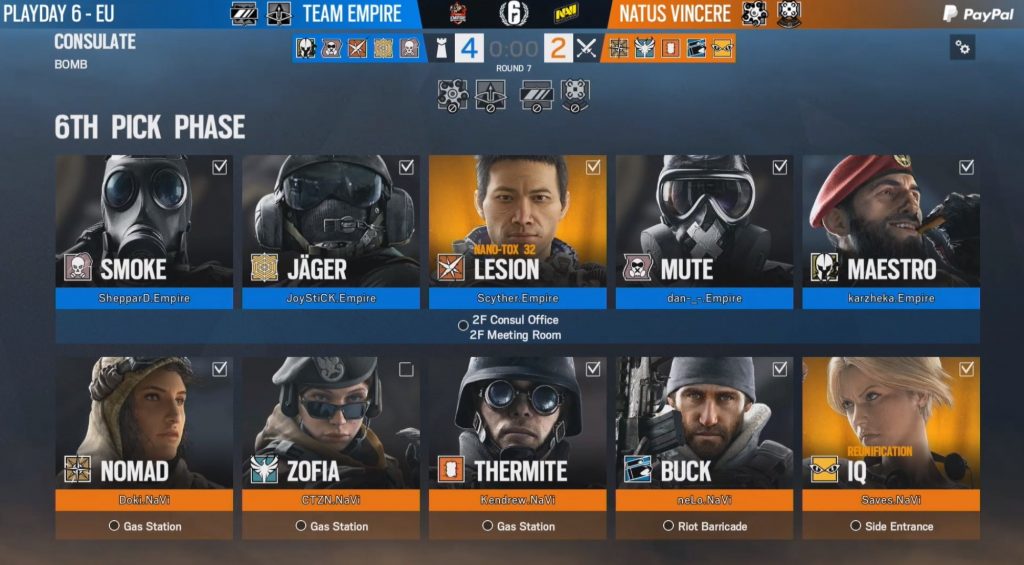 With some good play and a timely loss by LFO, Team Empire take the top spot in the Rainbow Six EU Pro League standings.

With European playday 5 and 6 over, we are only one more playday away from reaching the Rainbow Six Siege mid-season break. Across the last two playdays, we have seen a shift in the standings, with the league looking even more competitive. To sum up the recent matches, there has been a change of pace for teams sitting at the bottom, whilst a new leader emerges.

In previous weeks, we have commented on Eugene “karzheka“ Petrishin’s carrying of Team Empire. In recent games, Danil “JoyStiCK“ Gabov and Danila “dan“ Dontsov both started heavily carrying their game, especially in their match vs Natus Vincere on playday 6. Their wins over the last two playdays kept their momentum going as they trailed one point behind LFO. In addition, luck was on their side as LFO were finally defeated later that day, meaning Team Empire now leads with 16 points.

Team Empire has looked much better as of late. Although, the true question for them is if they can maintain it vs LFO on the final playday. This battle is this half’s must-watch to officially send off the mid-season with a distinct leader of the pack.

The Bottom of the Pack Bounces Back

It has been a troubling season for G2, PENTA Sports, and GiFu. Whether that be losing games embarrassingly, not reaching their potential or GiFu losing their organization. To say the least, they have all had a bad first half of the season. Although, their luck seems to be changing.

For G2 Esports, they showed the world they have still got it by taking down LFO. This is a great achievement since LFO playing online is an entirely different foe to LAN LFO. Their game was intense with back and forth rounds. In the end, the game finished 7-5 for G2 Esports.

First round of the match and it's already explosive! We are up for a great show! #R6PL pic.twitter.com/5XpW2lhhRD

As for the mood, G2 seemed to be having a fun time. There was banter being hurled at the start of the game, in Fabian “Fabian” Hallsten’s post-game interview, and when Niclas “Pengu” Mouritzen even killed himself with his own frag grenade. The entire attitude of the match seemed great; hopefully, this is a shape of things to come in the Raleigh Six Major.

As for PENTA Sports, their team has had a bad spotlight on them. There was a wash of poor results, including a 0-7 crushing defeat to LFO. Furthermore, coach Jessica “Jess” Bouldon’s comments about Rogue’s coach prior to Rogue’s victory at DreamHack Valencia caused drama on Twitter. Context aside, this hasn’t affected the team’s mentality as they bounced back with a draw against Team Vitality, the current 3rd place team. Though, on playday 5, they were defeated 7-1 by Chaos E.C. PENTA still have room to go but it’s a positive sign seeing they haven’t given up despite their calamitous half.

Lastly, GiFu have had their own issues this season. Prior to playday 6, they have only lost their games. Even mousesports ceased their contract with them on July 1st. It seemed to be going from bad to worse for the Finnish side.

With a mutual agreement we have been released from our contract with Mousesports. We are now looking for a new organisation to present in the current season of R6 PL. Meanwhile, it's time to revive an old friend… pic.twitter.com/sp1M3IPrVr

However, GiFu managed to earn themselves their first point of the season with a draw vs Chaos. To do so, they shifted their game plan to be quick and aggressive, resulting in strong round wins. With the mid-season break vast approaching, Gifu have an opportunity to hone their newly found successful style in the break period.

Is Season 9 Repeating Itself?

By the 5th playday, normally an esports league has a clear sign of the power rankings of teams within it. However, this ladder looks to be due for a mid-table shakeup on the final day.

As it stands, Team Vitality are on 10 points, NaVi on 9, with Chaos and G2 both on 7 points. With the way the schedule works out on playday 7, Navi will play Chaos, with G2 playing PENTA, and Vitality playing GiFu.

There is room on the final playday to really give this half of the season the send-off it deserves. There is room for upsets, as seen with the PENTA’s and GiFu’s draw on Monday. As for NaVi, they look to be on a comedown against top teams, whilst Chaos seem to be better than the mid-table teams. Who knows what exactly will happen next week, but regardless, the narrative will look clearer after the fallout of playday 7.