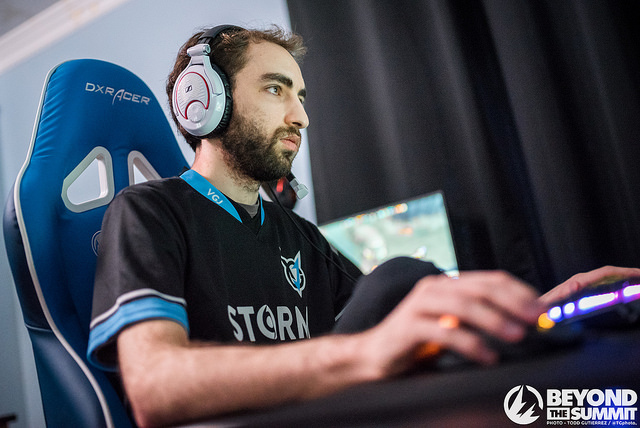 Quincy Crew took victory despite having to use an emergency stand-in for their final match. (Photo courtesy Beyond the Summit)

Quincy Crew has won ESL One Birmingham 2020 Online: North & South America tournament, defeating CR4ZY. In an incredibly impressive display, Quincy Crew was able to decisively defeat their major rivals for the title of “Best Team in NA.” What’s more, they did so while using Rodrigo “Lelis” Santos as a stand-in for the event, and needing an emergency replacement for the final game.

The two teams had previously clashed in the upper bracket after both of them topped the group stage with 5-0 and 4-1 records. CR4ZY had won their group stage match, while QC was victorious in the playoffs, sending CR4ZY to the lower bracket. On both occasions, the games were long and bloody affairs, with their 2-0 score lines barely hinting at the war that went on.

CR4ZY had also finished off Evil Geniuses in convincing fashion to get their second chance with Quincy Crew. In that matchup, it had been Jonathan Bryle “Bryle” Santos De Guia’s Storm Spirit that had been the deciding factor. Able to easily control his matchup and support a team that struggled in the side lane, Bryle would be the key component to the squad’s strategy in the finals.

However, clearly having done their homework, QC immediately banned Storm Spirit in the first game and attempted to facilitate their own star mid player, Quinn “Quinn” Callahan. The battle for the title of “best mid NA” was very much the story of this matchup. Bryle could shrug off the mantle of an “up-and-coming” talent with a convincing defeat over Quinn and company.

For the opening match of the finals, QC looked to scale into monsters courtesy of their Spectre pick, while CR4ZY came stacked to fight with their Enigma, Clockwerk, and Keeper of The Light. The game started with an early stalemate for the first five minutes until CR4ZY caught Arif “MSS” Anwar on the second bounty rune spawn. CR4ZY also secured clutch kill mid, and looked like they were set on the path to victory.

But after this, CR4ZY got a little too cocky, and QC was able to grab a number of kills back. A critical fight in the bottom lane spelt the end of CR4ZY’s initial lead. From there, things went from bad to worse as QC were able to let Yawar “YawaR” Hassan’s Spectre farm up, and protect him as he did so. After a few more CR4ZY misplays, Quincy Crew was able to wrap up the first game with a win.

As the second match kicked off, CR4ZY looked to rebound by banning away some of the picks that QC had used to deadly effect. The Death Prophet and Bane were banned out, while CR4ZY went for safer laners, combined with late-game scaling, in a big switch-up in strategy. After a slight pause to start the game, it was CR4ZY’s turn to farm-up a fed Spectre. Both teams were committed to their late game, with the Troll Warlord on the side of QC. As a result, neither team engaged much before 12 minutes, instead turning the game into more of a PvE affair, with limited harassment.

sorry for the pauses, @YawaR_YS has had internet issues since yesterday, was fine this morning initially but seems to have come back. fingers crossed

After another pause due to YawaR disconnecting, the game started to pick up the pace, with QC edging out a small lead. This lead began to snowball, as the formerly DC’d YawaR started picking up kill after kill on his Troll Warlord. With little to stop the rampaging Troll, CR4ZY opted to put Bryle bottom and have him push hard lanes. This delayed QC, but not for long, and after Bryle was caught out in the river, QC pushed in for the win.

CR4ZY would then switch things up again, opting for more early pressure with Lycan and Chen. Meanwhile, QC was comfortable to stick with the Troll Warlord, adding a Mars and returning the Death Prophet to give him some reliable support. Quincy Crew would also be without YawaR, as Ravindu “Ritsu” Kodippili would stand-in due to QC’s carry struggling with connection issues. Ritsu immediately made his presence known, trolling opponents and teammates alike by quickly pausing the game upon launch – a signature move from him.

As the game proper started, things went south for Quincy Crew, as CR4ZY took control of almost every lane. Quinn also gave up a kill to Bryle in mid after a big miscalculation.

But Quincy Crew doubled down on their aggression, which kept the pressure on CR4ZY. This forced several mistakes, and took away a lot of their potential for farm, starting a slow move towards victory for QC. CR4ZY attempted to prevent the scaling by catching out the Troll Warlord whenever they could and sneaking a Roshan. However, almost all the benefit from the Roshan take was lost in a single fight, with the Aegis on Riki popped, and Troll grabbing a handful of kills. This would be the nail in the coffin for CR4ZY, who weren’t able to mount a comeback again. Quincy Crew took victory 3-0

The team claims $15,000, while CR4ZY grabs $10,000. Overall, this was a fantastic series for QC, with YawaR and Quinn showing why this team is so often at the top of the NA rankings. Stand-in Rodrigo “Lelis” Santos was another highlight, with his near-flawless performance on Death Prophet in the first and third games.

its great & and a relief to finally take down one of these online tournaments. thanks again to @ritsudota , one of the OG quincy crew, for coming in clutch. huge thanks to @lelisdota for setting aside some stream time to run with us. leslao postgame incoming!

With the NA & SA finals wrapped up, ESL One Birmingham 2020 Online is complete. The event was another slickly produced tournament, which exceeded the high standards set by ESL One Los Angeles Online. But if you’re worried about there being no more top-level pro Dota 2 to watch, then have no fear! There’s only a week to wait until the BEYOND EPIC event kicks off on June 15th.