Qiyana: First Impressions of the New League of Legends Champion 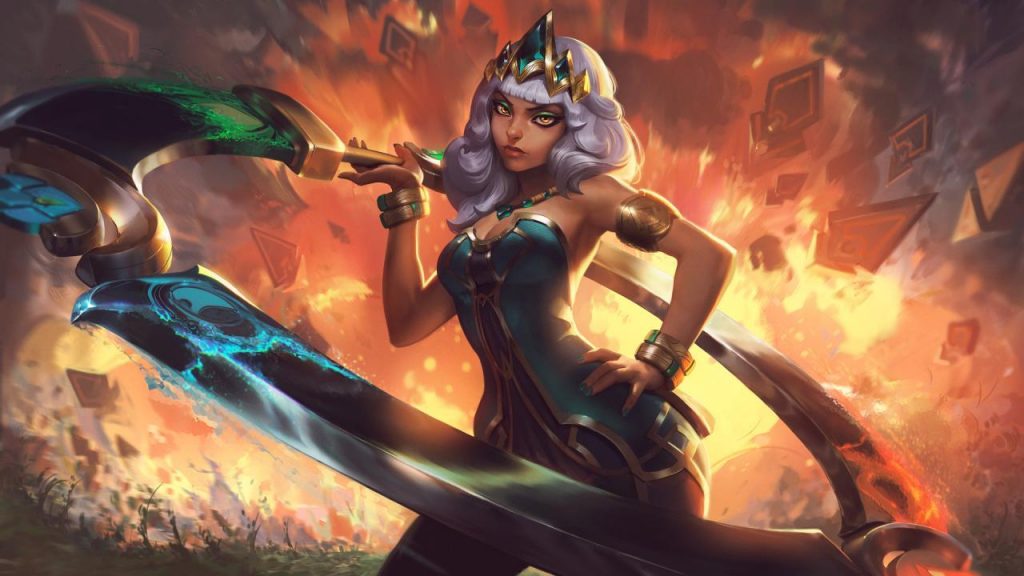 Qiyana is set to become a League of Legends champion with Patch 9.13. (Image via Riot Games)

Riot Games has released information on League of Legends’ newest champion, Qiyana: Empress of the Elements. Qiyana is an attack damage (AD) burst assassin with high mobility and the ability to change her kit based on nearby terrain. Here are our initial thoughts and reactions to the Empress of the Elements and how she will play in the game.

The first attack or ability against an enemy champ deals bonus damage. This cooldown resets when she draws a new element.

Qiyana slashes the area in front of her dealing damage. If her weapon is using an element, her weapon hurls forward as a projectile and explodes.

Targeting an element, Qiyana dashes forward to gather its power. While enchanted, she gains movement speed near the element, attack speed, and bonus damage.

Qiyana dashes a fixed distance towards a target, dealing damage to them.

Qiyana creates a shockwave, knocking back enemies. Any River, Brush, or Wall hit by the shockwave then explodes dealing damage and briefly stunning enemies.

WHAT ROLE WILL QIYANA FILL?

There are generally two roles we see AD assassins fit: mid lane and jungle. In certain very specific metas, we have seen them thrive as a carry top lane or bot, but the general design philosophy has kept this type of champion away from the longer lanes in general. AD assassin and tankiness don’t go hand-in-hand.

So while we can safely assume that Qiyana will open as a jungler or mid laner, where she eventually settles among the two is hard to tell at this stage. The first and biggest barrier to entry as a jungle champion is clear speed. Without the numbers in hand, we can only guess how quickly Qiyana can clear the jungle. Edge of Ixtal does AoE damage on a seemingly low cooldown and Terrashape gives bonus attack speed and damage, two good signs working in her favor. But the lack of any form of healing or shielding does not bode well for her ability to maintain a healthy first clear.

Unless Qiyana can kite camps around in the jungle as well as a champion like Taliyah, the safest bet is that we’ll see her start as a mid laner. While you’d like to see more AoE abilities to clear waves, it does look like  Edge of Ixtal will be on a low cooldown to compensate. The rest of her kit telegraphs a roaming champion, so mid lane would make sense for her ability to get out of lane and roam as often as possible.

As a burst assassin with high mobility, Qiyana’s focus will be singling out enemy targets or creating odd-numbered fights in favor of her team. Having dashes that can jump walls on both her Terraform and Audacity allows her to make roams that other, less mobile champions wouldn’t be able to risk. In terms of a champion comp, Taliyah continues to come to mind on a projected play style, not even mentioning how both champions are themed around manipulating terrain.

Terrashape resets the cooldown on Edge of Ixtal, so players will be able to pull off some quick burst combos that can feature two different versions of Edge of Itxal and two dashes. The use of terrain will be critical to the type of play Qiyana will want to set up. Roaming up and down the river will allow Qiyana to open any potential picks or ganks with the root version of Q: Edge of Ixtal. Ideally, players would then gather the brush element for extra movement speed and stealth to dodge return damage. Finally, the wall element will be ideal for using Edge of Ixtal as an execute on low health targets.

Qiyana’s Supreme Display of Talent will be best utilized in choke points like the rivers and jungle. Hitting terrain expands the shockwave to cover more area and includes an explosion that stuns enemies. Look for Qiyana to be paired with champions like Anivia and Taliyah who can create their own terrain to combo with Qiyana’s Supreme Display of Talent.

Qiyana will probably suffer against the tankier champions who can survive an initial burst and can return damage on the squishy assassin. Poppy will be a popular counter for her innate tankiness from her Iron Ambassador and her anti-dash Steadfast Presence.

Overall, Qiyana looks like another high mobility champion with an emphasis on roaming and team play. She won’t be the pick for a player trying to dominate in lane, but her play style should be great for players looking to get involved on the map as early as possible. The Empress of the Elements will be playable for the first time on Patch 9.13.