Prepare for the DPC’s Last Minor: the StarLadder Ukraine Minor 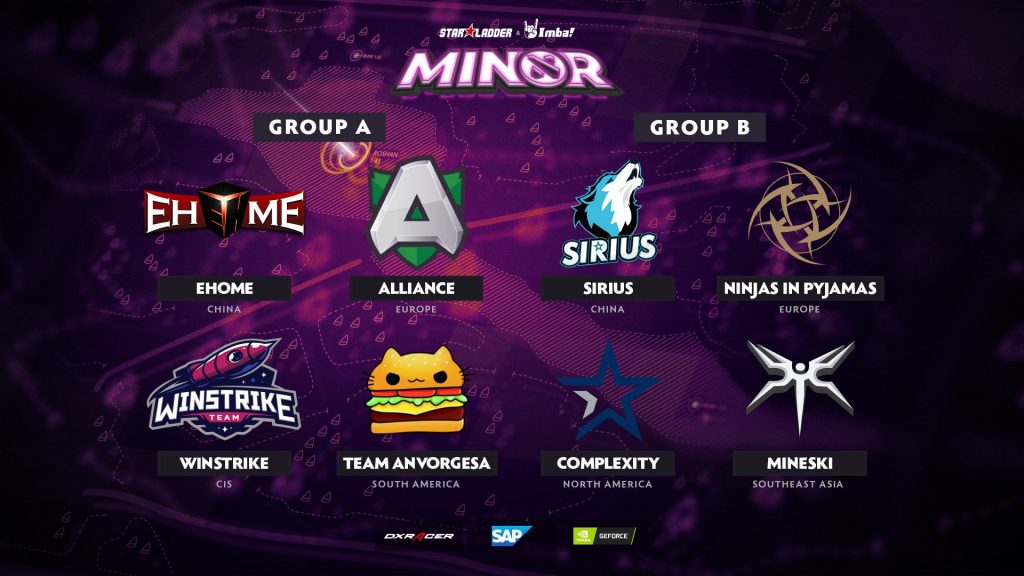 The Dota 2 Pro Circuit (DPC) wraps up with one final Minor-Major pairing this June. The StarLadder Ukraine Minor (also called the StarLadder ImbaTV Dota 2 Minor Season 2) kicks off on June 12-16 in Kiev, Ukraine. The EPICENTER Major will follow later in the month.

The Ukraine Minor has $300,000 USD and 500 Pro Circuit points on the line for the eight teams that qualified to attend it. The top two teams will also receive invitations to the EPICENTER Major, which means a shot at even more DPC points.

All of the series will be best-of-threes except for the grand final, which will be a best-of-five.

EHOME and Alliance are the more obviously competitive teams. EHOME will have star off-laner, Zhang “Faith_bian” Ruida,  competing with them for the first time on LAN since the disastrous MDL Macau event when he was injured during a photo shoot. The team hasn’t really hit it big yet this season, but they have all the pieces for a good run at the Minor. Meanwhile, Alliance recently crashed out of ESL One Birmingham 2019 in 11-12th place, but they have also been building hype around their roster. Can it all come together for either team at this event? EHOME was second and Alliance third at the previous Minor, OGA Dota PIT Minor 2019.

Winstrike had a recent roster change that brought three new players to the squad including Ilya “Lil” Ilyuk, Aleksander “Nofear” Churochkin and Zaur “Cooman” Shakhmurzaev. A month is more time than some teams have had to get themselves together, of course.

Team Anvorgesa is the real wild card in this group. They’re a stack of familiar Peruvian players with Adrian “Wisper” Cespedes Dobles the lone Bolivian player. Three of these players have competed in previous Minors, but otherwise, none have had notable seasons so far. Can they show up and surprise the other teams?

The first matches for this group are EHOME versus Team Anvorgesa and Alliances versus Winstrike.

Our team of talents has already come together to work for you on the broadcast from June 12th to 16th.

NiP should take the top spot in the group; they’ve already qualified for The International 9 by accumulated DPC points and have proven themselves to be competitive at various tournaments across the season. They’ve been shaky at times though, placing 9-10th at ESL One Birmingham 2019, so it’s possible they’ll open the door for another team to take the top spot from them. Still, we like their odds of winning the Minor. Of course, they’ve done it before this season.

Complexity Gaming and Mineski are likely to battle it out for the second spot in Group B. Mineski is sitting sixteenth in the DPC rankings, with a pair of 9-12th-place finishes at Majors this season under their belt. Complexity has made headlines this season for a brief issue with one of their players and for their rebranding, but they’ve not impressed competitively. Not yet, at least. Still, both of these teams are hungry and have experienced players on their squads. They’ve had some time to sort themselves out and should come into the Minor prepared to impress their fans.

So given that stellar endorsement of Complexity and Mineski, why a greater lack of faith in Team Sirius? The roster formed in mid-April 2019 and have already made multiple roster changes. The most recent swap was on June 5, when Yang “Injuly” Xiaodong joined the squad and He “Inflame” Yongzheng departed. The lack of stability and that the new roster have only been together for a week are cause for concern. They could, of course, completely surprise and dominate their group and the event, but it seems more likely at this point that they’ll struggle.

This group’s first matches are Team Sirius versus Ninjas in Pyjamas and Mineski versus Complexity.

Patch 7.22 has already been tweaked twice, to become Patch 7.22c. The most recent changes happened on June 9. The biggest changes hit Chen, with a rework of Divine Favor and his talents, but many heroes were affected by smaller nerfs and buffs. Other notable heroes hit with larger adjustments include Clinkz, Io, Lich, Puck and Tinker.

We’ll soon see how effective these balancing adjustments were. ESL One Birmingham gave us an opportunity to watch teams experimenting with the initial Patch 7.22 changes. Has there been enough time for teams to develop successful theories about how to win games of Dota 2?

As a bonus, there won’t be multiple streams for the Ukraine Minor, meaning you can watch every game if you like! Check out all the action starting June 12 at 5 a.m. EDT on Twitch.