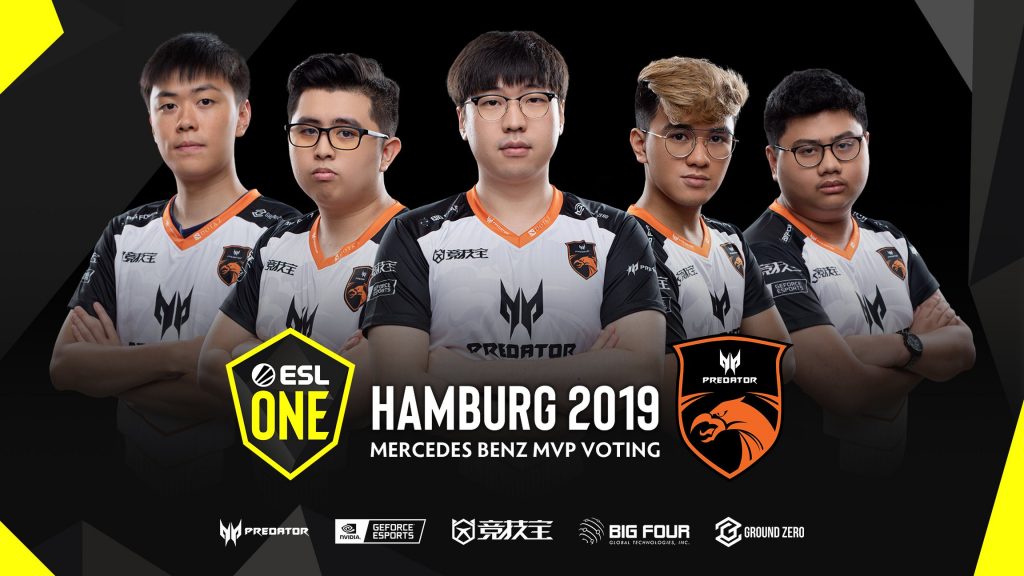 TNC Predator have been the stand-out team of the ESL One group stages. (Image via ESL)

The group stage of ESL One Hamburg has just wrapped up, and after three days of intense games, we now know which eight teams will be headed to the playoffs. And although there may not be too many surprises in which squads reached the second stage of the event, the way they got there was anything but typical.

The biggest story from the first few days of the tournament has to be the unfortunate illness of Quinn “CCnC” Callahan, whose ailment was severe enough to have him take a trip to the hospital. While specifics aren’t available, Quincy Crew’s veteran carry was sick enough that he wouldn’t be returning for the duration of the group stage.

Still at the hospital awaiting further updates on Quinn. All I can say now is, a big thanks to @ESLDota2 @ESL and several other unsung, helpful people for handling a rather difficult situation swiftly.

The adverse timing of CCnC’s illness is yet another roadblock on Quincy Crew’s journey to a successful season of Dota. Just recently, Sumail “SumaiL” Hassan left the team after only two weeks in the lineup, with the team’s manager, Jack “KBBQ” Chen, citing a number of internal team issues.

SumaiL was in attendance at Hamburg for the event, but confusingly the team opted not to activate their former player as a stand-in straight away, instead forfeiting their first game. An hour later, whatever situation was preventing SumaiL from playing had changed, as the team activated him as a temporary stand-in. But in the next three games, the team only recorded a pair of draws and a loss, leaving them with an 0-2-2 record heading into the final day.

But Quincy Crew weren’t the only team struggling at ESL One Hamburg. Virtus.pro, one of the highest-rated teams headed into the tournament struggled early against a dominant-looking Vici Gaming and even dropped games to a promising Vikin.gg squad. And elsewhere, Ninjas in Pyjamas only recorded wins against the bottom of the table Wind and Rain, and the forfeiting Quincy Crew.

Group A: Never Count Out beastcoast

One team who definitely would have wanted a do-over of first few days of competition was beastcoast. The South American lineup ran into a brick wall with their first two opponents. After facing Alliance, who were dominant at DreamLeague Season 12 earlier this month, and a Vici Gaming team who’s hit their mid-season form early, beastcoast had a miserable 0-4 record.

But after a good night’s rest, the team seemed completely revitalized. After smashing Fighting PandaS, thanks to some questionable bans from their opponents, and then demolishing a struggling Virtus.pro, beastcoast shot up the standings. They finished the stage with more 2-0 victories than their next closest rival, Alliance, and only narrowly missed out on an upper bracket spot.

0-4 in Day 1 of #ESLOne Hamburg, 4-0 in Day 2! @beastcoast are looking stronger and stronger! Will the SA team have a shot at first place? 🤔

Ultimately Group A did not have clear winners and losers. Even at the bottom of the table, it’s unfair to say that the Fighting PandaS or Vikin.gg didn’t perform well, given the high standard of their opponents. Alliance, the team that’s impressed very recently, has started to show weaknesses. And some organizations have slipped into the playoff bracket with frankly dismal records.

Group B: Predator and Prey

After two days, group B had one clear winner and several teams struggling through with draws. TNC Predator looked unstoppable. The Southeast Asia stack was undefeated, and it didn’t look like that would change anytime soon, especially with Kim “Gabbi” Villafuerte 1v5ing on Morphling. And even if their play wasn’t exactly flawless, there was something about their hyper-aggressive late-game team fighting that just clicked.

But incredibly, TNC was finally defeated by an unlikely opponent. Wind and Rain, who’d barely moved from the bottom of the bracket, finally showed signs of life, upsetting TNC in their final game, thanks to a godly performance from Dimitry “Nefrit” Tarasich on Bloodseeker. While this couldn’t dethrone TNC from their spot at the top of the table, it did rocket Wind and Rain to fourth place contention, and a chance to head to the playoffs.

Thanks to a thrilling 2-0 of Team Liquid by Quincy Crew and a stomping of NiP by Gambit Esports, Wind and Rain would make it into the second stage. Meanwhile, in the biggest shock of the tournament, Team Liquid found themselves eliminated, with a disappointing 3-7 record. They depart alongside teams that are nowhere near their equal, at least given the team’s performance at The International 2019, and in the previous DPC season.

ESL One Hamburg continued today with one playoff series, the first of the upper bracket matches. Lower bracket games begin tomorrow at 13:30 CEST and can be watched on ESL Dota 2’s Twitch channel. Additional information, full brackets, tickets, and more are available on ESL’s official website.