Pound 2019: Stacked From Start to End 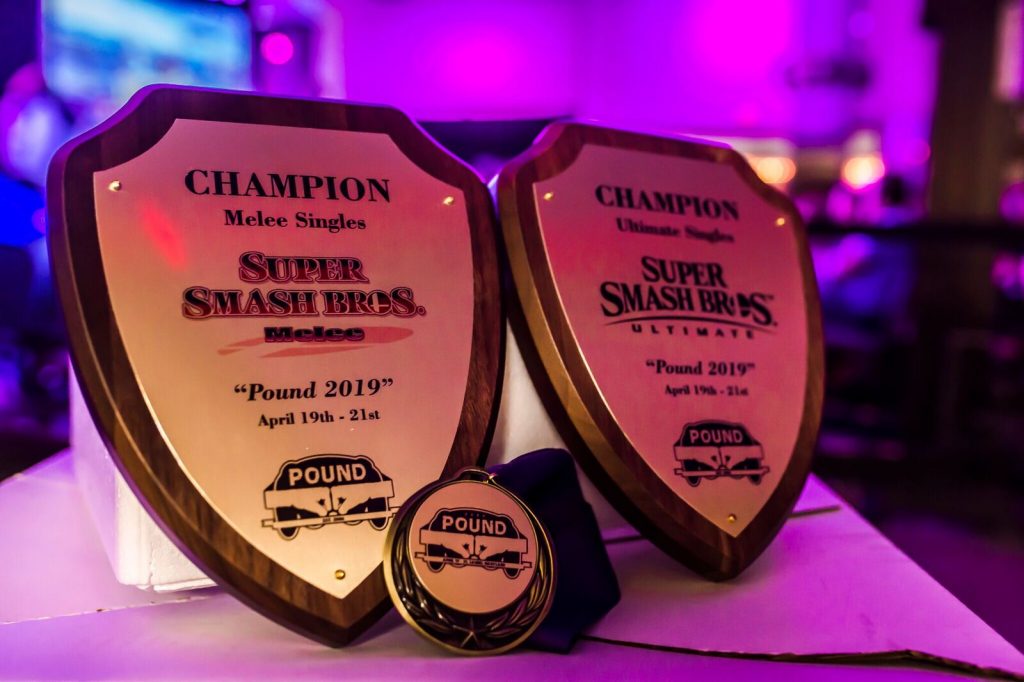 Pound 2019 wrapped up over the weekend with a few surprises. (Photo courtesy of @pound_series / Twitter)

Pound 2019 lived up to its prior super-major status with 1,682 entrants and was heavily saturated with top talent in both Super Smash Bros. Melee and Ultimate. It was one of the most stacked events of the year so far, with players like Justin “Plup” McGrath, Jeffrey “Axe” Williamson, Tyler “Marss” Martins and Jestise “MVD” Negron, just to name a few. The total prize pool for Melee was just over $8,500 USD while that of Ultimate was roughly twice as much.

As expected, Juan “Hungrybox” Debiedma claimed the champion title for Melee singles, though he was sent to losers by Joseph “Mang0” Marquez after a game five set in winners semi-finals. Plup claimed third after losing only to Mang0 and Hungrybox, with Zain Naghmi close behind in fourth. Zachary “SFAT” Cordoni and Johnny “S2J” Kim tied for fifth. Axe came in seventh after a heartbreaking game five set just before losers quarter-finals against SFAT.

The placement of each player I’ve mentioned so far isn’t much of a surprise, but I don’t think anyone was expecting much from Pound’s first champion, Daniel “ChuDat” Rodriguez. ChuDat tied with Axe for seventh place after losing nail-biter, game five sets against Zain and S2J. William “Leffen” Hjelte decided to drop out of Melee this tournament due to some health issues, so that explains his absence from top eight.

In Melee doubles, Plup and Jason “Mew2King” Zimmerman took first from winners over Kevin “PewPewU” Toy and SFAT, the duo that tends to be the favorite for doubles brackets. To make their win even more impressive, Mew2King hasn’t entered a Melee tournament since Genesis 6, where he placed 33rd. Hungrybox and ChuDat took third, with Zain and Kashan “Chillin” Khan in fourth.

While most Melee fans will have heard of these players, the remainder of Pound 2019’s doubles top eight is made up of hidden bosses. Fifth place was claimed by Tyler “Lintgod” Auger and Anthony “Slox” Detres along with Drew “Drephen” Scoles and Matt “Boyd” Reymann. Thomas “Juicebox” Roche, MOM!, Trevor “Atomsk” Hirschen and Turtle tied for seventh.

rst place for Ultimate singles, but not without breaking a sweat. Each of his sets in top eight—against Samuel “Dabuz” Buzby in winners semi-finals and Robert “Myran” Herrin in both winners and grand finals—went to game five. Myran ended up placing second, followed closely by Marss in third. Ezra “Samsora” Morris came in fourth. Dabuz and Saleem “Salem” Young tied for fifth, with MVD and Leonardo “MkLeo” Lopez Perez tying for seventh. Once again, seeing MkLeo’s “low” placement comes as a bit of a shock, but it shows that Ultimate has begun a new era for Smash talent.

And that's all she wrote. @AllyUltimate reigns supreme winning this year's #Pound2019 | We sincerely thank all that attended and watched along, and we will see you next year.

Marss and Paris “Light” Ramirez duked it out with Nairoby “Nairo” Quezada and Samsora through winners finals, grand finals and a grand finals reset in Ultimate doubles. Nairo and Samsora sent Marss and Light to losers after game five in winners finals, but the tables turned in grands.  Marss and Light beat Nairo and Samsora after another game five set. The reset was pretty decisive in Marss’ and Light’s favor, granting them first and Nairo and Samsora second. MuteAce and Ramin “Mr.R” Delshad earned third, with Ally and Larry “Larry Lurr” Holland coming in fourth. MkLeo and Mew2King tied with Myran and Griffin “Fatality” Miller for fifth, while Eric “ESAM” Lew and MVD and Rasheen “Dark Wizzy” Rose and Salem tied for seventh.

Riddles is a Richter main currently ranked third on the Southern Ontario Power Rankings. Puppeh is a 16-year-old Wolf and Pokémon Trainer main who is ranked fifth on the MD/VA PR and second in Virginia as a whole. Kiwi is a Pac-Man main ranked fourth on Connecticut’s PR. Ned is ranked number one on Chicago’s PR and is considered one of the United State’s best Pokémon Trainer players.

It’s obvious that the Smash community at large was confident in the success of the Pound tournament series’ return given the high concentration of talent in attendance. Although Pound 2019 had its fair share of drama (à la a “crabby” attitude toward Hbox after Melee top eight and ESAM losing 10-1 to Samsora in a $500 money match), Smash fans are glad it’s back from its hiatus and look forward to Pound’s future.