Poome: “I Don’t Think The Losses Matter That Much” 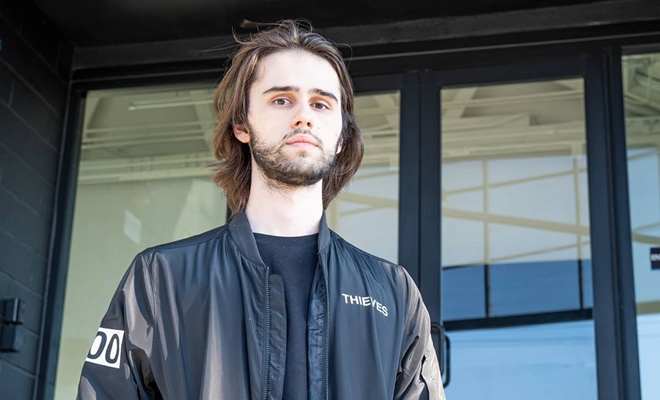 Despite only playing League of Legends for about two years with some amateur experience, Poome joined 100T and was quickly promoted to the main team. (Photo courtesy Poome Instagram)

100 Thieves opened up the League of Legends Championship Series 2020 Summer Split with a worrying loss streak, prompting them to sub out team mainstays Will “Meteos” Hartman and William “Stunt” Chen. When jungler Juan “Contractz” Garcia and support Philippe “Poome” Lavoie-Giguere stepped in to fill their shoes, however, the community was left wondering whether or not it was too late for 100T to come  back.

The decision paid off quickly once the new starting lineup started stacking wins, eventually breaking Cloud9’s perfect record. 100 Thieves is still hanging on by a thread in 7th place, but they don’t seem too worried. After 100T’s loss against Golden Guardians on July 24, we spoke with Poome about how the team learns from losses, his fast transition from amateur to LCS, and how he’s been trying to make a name for himself.

Hotspawn: Can you break down what happened against GG?

Poome: Yeah, that one was really unfortunate. I think they slightly outsmarted [us] and after that happened it was really hard because we basically lose prio in the lane that we should get prio from. Then I think we miss-executed fights and were on different pages when it came to objective control. Then we were giving Dragons that we could’ve potentially fought because we were not on the same page or the same position.

I think amateur is a bit doomed.

Hotspawn: The second half of the split has kind of been a rollercoaster for you guys because you beat Cloud9, but then started losing more after that. How’ve you been dealing with losses and learning from them?

Poome: I don’t think the losses matter that much because usually it’s us just getting something to learn from them. Usually in scrims we do really well, we plan out what we want to do for the week really well, and then we practice what we want to do. It’s just sometimes on gameday bad habits come back or we just miss-execute on what we plan to do. So it basically just means that in the week after in scrims we’ll work on it even harder and probably perform. We won versus C9, but it’s not because you win versus C9 that you’re gonna win versus every team. Every team has a different playstyle.

Hotspawn: What would you say 100 Thieves’ ideal playstyle is right now?

Poome: We definitely want to snowball early. We want to fight and be very aggressive, that’s usually our playstyle.

Announcing 100 Thieves Next, our amateur program dedicated to developing the next generation of North American League of Legends talent.

Hotspawn: Shifting gears, I know you’ve spoken about coming from 100 NEXT and Academy to LCS. Having played in amateur even before that, what do you think can be improved about the amateur scene in NA? Any players you think could make a shot at LCS right now?

Poome: Yeah I’ve been playing amateur for two years, but I think amateur is a bit doomed because there’s not a lot of money being pumped into it and not a lot of incentive to actually stay on teams and all of that stuff. I think on 100 NEXT there was actually incentive to stay because you’re actually with an org and you know you can be scouted from the Academy team or the LCS team. Some of my previous teams where it’s just random orgs with 10 followers there’s not really incentive to stay on the team or be performing. The other thing is, there are too many leagues that force the players to play like six days a week as game days. That’s pretty unhealthy because teams burn out, coaches burn out, players burn out, and then since there’s no incentive to stay on the team the roster changes a lot. Right now it’s doing better in amateur because I think the incentive is higher right now because they added a lot of money into some of the leagues and the Scouting Grounds Circuit.

I think there are a lot of people that could potentially go to Academy, I know Milan “Tenacity” Oleksij and Shane “Kenvi” Espinoza went, which I think is really insane. I think other players from 100 NEXT will go to Academy either for 100 Thieves or other Academy teams. I can’t really speak for other players because I can only see them from outside, which is a little biased. I don’t know what their communications are and how they play as a team, their attitude, stuff like that, so I don’t really wanna say anything about other people.

Hotspawn: Erik “Treatz” Wessen has been vocal about how some players in LCS are cruising by or if there was a tournament between LCS and Academy, some teams and players would be exposed. Have you noticed a significant skill gap between amateur and LCS? What would you say the difference is between the two leagues when it comes to laning mechanics for example?

Poome: It’s definitely very different. In amateur, usually every lane is going to be very volatile because people play really aggressively. In LCS it’s not gonna happen because there’s a bigger risk. In amateur let’s say you go 0-5 in lane. You can probably still win the game because amateur people don’t tend to know how to end the games. But if you go 0-5 in LCS lane then you’re probably just done and the game is over. I think that’s the main difference. I think Treatz is right in saying that some Academy players can be LCS. Treatz is really good. Even when I played against him in Academy I was like “this guy is LCS for sure.” This guys laning phase is insane and his  communication is really good and his macro is good. I think there’s maybe some other Academy players that can be in LCS, it’s just gonna take a little bit of time before coaches and staffs realize it and give them the time.

Hotspawn: Before when people spoke about finding amateur talent, they’d say they found someone in solo queue. Now there’s Twitch Rivals, the new Scouting Grounds Circuit, but so much talent still goes unnoticed. What advice do you have for some high level amateur players wanting to get noticed? How were you picked up by 100T?

Poome: I wasn’t noticed at all. I didn’t even have a team for the Tyler1 Championship Series until they asked me to play and then after TCS I kind of got half-noticed. I still wasn’t really being asked to play on the top amateur teams. Even after TCS there wasn’t really anything big. The only reason 100 Thieves scouted me is because of a reference from Osama “Auto” Alkhalaileh. So I can’t really give any advice because I don’t think anything happened for me to be like “you should do this,” because someone referred me.

Hotspawn: Of course there’s some luck involved with most things, but it was good you had those connections.

Poome: Yeah it was mainly good that I had the connections to Auto and that 100 Thieves wanted to pick up Auto and Kevin “FallenBandit” Wu.

Hotspawn: You’ve really taken advantage of your newfound success out the gate between your streaming and getting the #poomegang behind you. Honestly, if you’re a player in NA with your own hashtag, you’re doing something right. Have you been trying to expand your brand more since you said not many people knew of you?

Poome: Yeah. I wasn’t very active on social media and I think it’s pretty important at least right now in this day and age in America. So I’m just branching out with some stuff because I like streaming so I’m definitely gonna be doing that. And streaming comes with Twitter and Instagram so I’m slowly working on all of that because I’m not very good at it either. Just taking it slow.

Hotspawn: Has anybody at 100T been helping you with it?

Poome: There’s definitely people that help. For Twitch, I know that there are people that’ll help me with OBS and all of my alerts and overlays and all of that. For social media, I know Chris “PapaSmithy” Smith usually retweets my stuff and tweets at me to get me some exposure and the social media people also do the same.

Poome and 100 Thieves’ next match will be against FlyQuest on August 1st at 1 p.m. PDT.