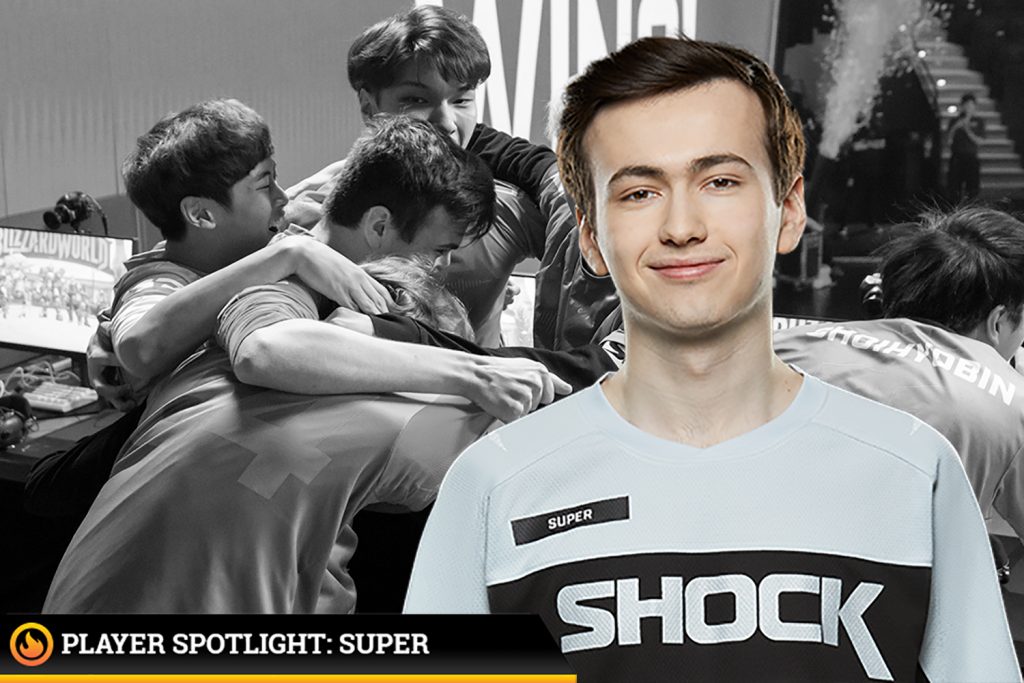 Super has made a name for himself in the Overwatch League as one of the most decorated and entertaining players around. (Photo courtesy Robert Paul Blizzard)

Esports is filled with young talents, so it is easy to overuse the word prodigy when talking about top tier esports players. However, if anyone can be considered a prodigy in the Overwatch League, it is Matthew “Super” Delisi, the youngest player to ever be signed to an Overwatch League contract.

Super entered the Overwatch League at the tender age of 17 and was forced to sit out the first half of the inaugural OWL season. When he was eventually old enough to compete, his impact proved to be worth the wait. During the 2019 season, Super excelled at Reinhardt during the height of the GOATs meta, making him a cornerstone of Shock’s 2019 Season Championship win. During the double shield meta, he adapted to play Orisa for the U.S. national team at the 2019 Overwatch World Cup, helping the U.S. win the Gold medal.

On top of becoming one of the most decorated OWL players in the world, Super also stood out as one of the most electrifying and entertaining personalities in the Overwatch League. Using his winning smile, supreme confidence, and ability to have fun on stage and in interviews, Super has positioned himself as the face and personality of San Francisco’s brand over the past couple of years.

Before the Overwatch League

Super first entered competitive gaming playing for the Team Fortress 2 team Bird Noises when he was 16-years-old. Soon after he joined the team, they switched from competing in TF2 to competing in Overwatch. The original Bird Noises Overwatch roster featured a number of future Overwatch League stars, including Jake “JAKE” Lyon and Connor “Avast” Prince. He immediately excelled in the tank role, showing off a world class Reinhardt early on his career.

Hammer Esports signed the entire Bird Noises roster in January of 2017. However, Super and the rest of the roster only competed with Hammer Esports for six weeks before it was acquired by Luminosity Gaming Evil, a sister team of Luminosity Gaming. While playing for them, Super participated in a unique moment of competitive Overwatch history.

LGE disbanded in August of 2017, in anticipation of the players receiving Overwatch League contract offers in the fall. In September of 2017, San Francisco Shock announced Super would be joining them as an inaugural member of their new Overwatch League roster.

Season 1: A season of waiting

Super was signed to San Francisco’s brand new Overwatch team despite the fact that he was too young and wouldn’t be eligible to play in the league until April of 2018, which was over half way through the first OWL season. This sent him to the bench throughout the first two stages of the inaugural season, though he was still working and practicing hard for when he would eventually be eligible to play.

The wait only increased fan anticipation and expectations. As Super’s birthday approached, many analysts, players, and fans were excited to see what the prodigy tank player could do in the Overwatch League. 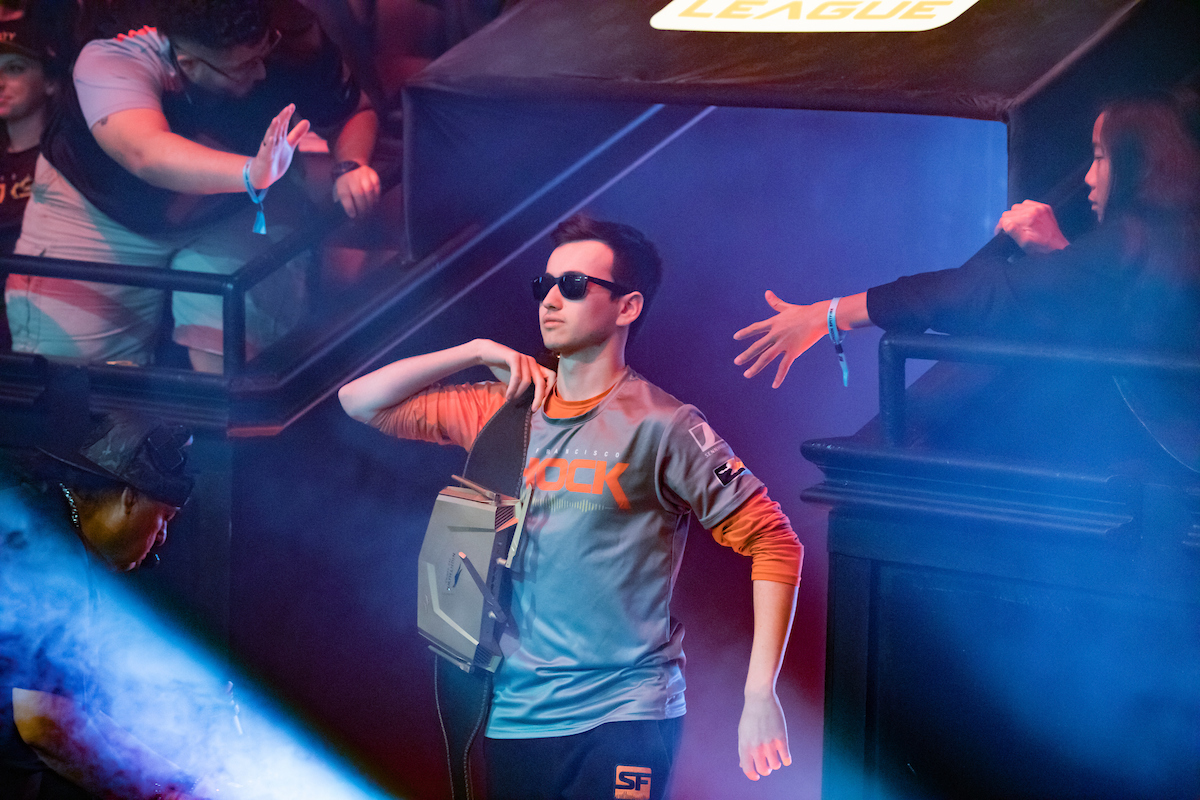 Super finally debuted at the start of stage 3. His first match came a few weeks after the debut of his teammate Jay “Sinatraa” Won, who was also signed at 17 but was several weeks older than Super. The two young phenoms definitely made a difference and improved Shock win rate in the second half of the 2018 season, but they could only do so much to bring Shock back from a losing record.

Season 2: Rising to role stardom in the GOATs meta

Coming into Season 2, Shock finally had access to Sinatraa and Super from the very beginning. They also picked up a number of other new players, including Park “Viol2t” Min-Ki, Kwon “Striker” Man-joo, and Kim “rascal” Dong-jun.

Most of the 2019 regular season was dominated by a new strategy called the GOATs composition. The GOATs composition was named after Team Goats, the tier 2 Overwatch team who created it, and consisted of the tanks Reinhardt, Zarya, and D.Va paired with the supports Lucio, Zenyatta, and Brigitte. The only real answer to this composition was to mirror it, resulting in almost no DPS heroes being played during OWL season 2 despite DPS heroes making up the majority of the Overwatch roster.

Winning in the GOATS meta relied primarily on excellent team coordination and individual prowess. The prominence of the strategy removed the guessing games from Overwatch matches and, for better or worse, let teams grind out a single strategy for nearly an entire season. Luckily, Shock and Super excelled at this tank focused strategy.

Super quickly rocketed to the top of the Reinhardt rankings in the 2019 season. His Reinhardt skills meshed very well with fellow teammate Sinatraa’s Zarya skills to make Shock an unstoppable force of destruction. At various times throughout the season, Super was ranked:

These stats translated into material results too, with Shock winning the stage 2 playoffs and coming in second at the stage 1 and stage 3 playoffs.

Heading into the final 2019 playoffs, Blizzard instituted the Role Lock for the explicit purpose of killing the GOATs composition. The new feature required teams to play two tanks, two healers, and two DPS. On top of that, the developers added a brand new tank hero, Sigma, who wasn’t even sort of balanced upon release right before playoffs. The winner of the 2019 Championship would be whatever team could best master the new Orisa and Sigma double shield composition. 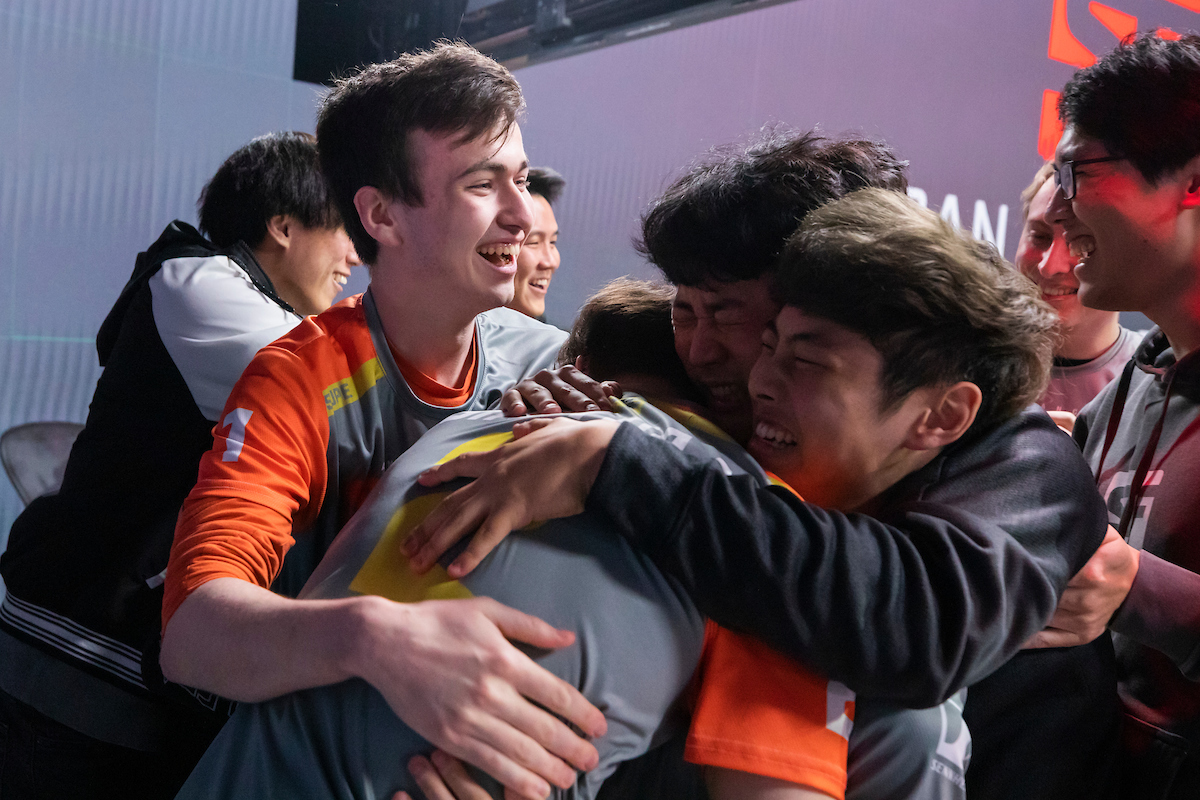 Unfortunately for Super, Shock’s Orisa specialist Myeong-hwan “smurf” Yoo’s took his place on the starting roster, as there was no place for Reinhardt in the playoff meta. Despite being a huge reason for Shock’s success in the 2019 season, Super had to sit out the playoffs. Shock went on to win the Championship, while their star tank prodigy warmed the bench.

Super was selected to be a member of the 2019 U.S. Overwatch World Cup team, along with his teammates Sinatraa and Grant “moth” Espe. This was the first time he was invited to be a member of the U.S. World Cup roster. While playing at the World Cup, he showed great flexibility by moving off his Reinhardt specialty and playing Orisa throughout the tournament. Despite never playing Orisa in OWL competition before the World Cup, Super found great success on the hero at the height of the double shield meta.

The U.S. faced the South Korean national team in the semifinals. South Korea had won the 2016, 2017, and 2018 World Cup, so this match was by far the greatest test for the American team. To everyone’s surprise, America overcame South Korea to advance to the finals. Super and his teammates from Shock were three of the best players in the world coming off their first championship, and it showed. 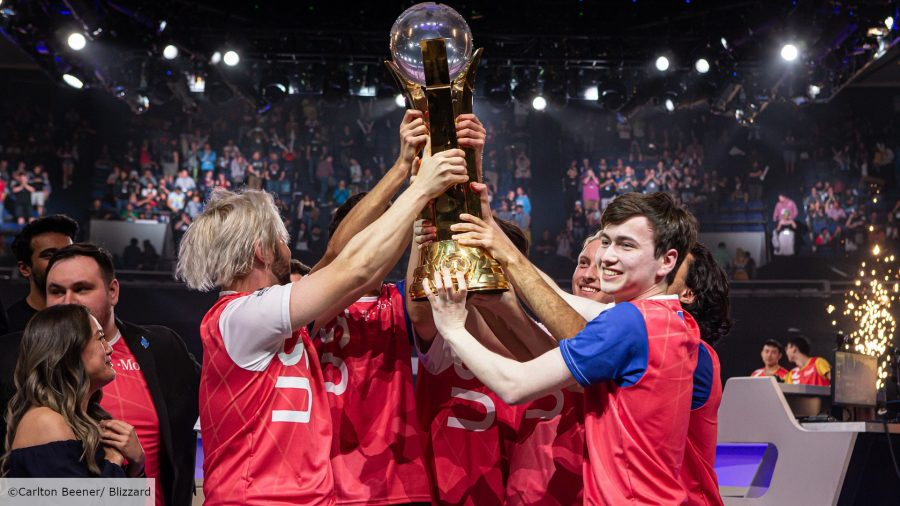 The Grand Final match felt like a breeze for the U.S. national team, who were able to easily sweep the Chinese national team to claim the 2019 World Cup gold medal. With the win, Super joined an elite club of players who have won an Overwatch League title and an Overwatch World Cup title. That club includes only Sinatraa, Moth, Super, and Kim “Fury” Jun-ho, as of writing this article.

Becoming the face of Shock

In the off season, Super and Sinatraa had the opportunity to make an appearance on NBC’s The Tonight Show Starring Jimmy Fallon. This was a great chance for the Overwatch League and Shock to reach a huge mainstream audience. The players explained how esports and Overwatch specifically works to Fallon’s audience. The exposure from the interview positioned Super as an one of the most visible ambassadors for Shock, Overwatch, and esports.

After an incredible season 2, Super entered the 2020 season as one of the most decorated OWL players to date. However, he saw only limited playtime this season, as the meta continued to privilege Smurf’s Orisa and Winston speciality. Although he had successfully played Orisa at the world cup, Smurf was generally considered to be better on that particular hero.

For most players, being relegated primarily to the bench would mean they fall out of the spotlight, but Super is not like most players.

He became the de facto face of San Francisco throughout season 3, consistently representing Shock in OWL interviews, selection shows, and even having a lighthearted beef with the Overwatch League production staff over a video edit of Super with his dad on father’s day.

Not only did he continue to stay in the public eye through interviews on OWL broadcasts and his nonstop Twitter snark, he also managed to find some play time in an unconventional manner. For several weeks during the Countdown Cup qualifiers in July, Shock surprised everyone by putting Super on Genji, despite him being a tank player.

He ended up playing the hero surprisingly well and currently has a 100% match win rate with Genji. During his stint on Genji, he even managed to outperform some DPS mains like Kelsey “Colourhex” Birse on the Boston Uprising. Although the decision to put Super on DPS appeared to be a meme at the time, both he and Shock have insisted that they were being 100% serious.

Super has made the most of his moment in the Overwatch spotlight. The upcoming playoffs will feature a brand new balance patch, with significant nerfs to both Orisa and Sigma. Perhaps we will soon see the return of Super’s Reinhardt or maybe even his “top tier” Genji.