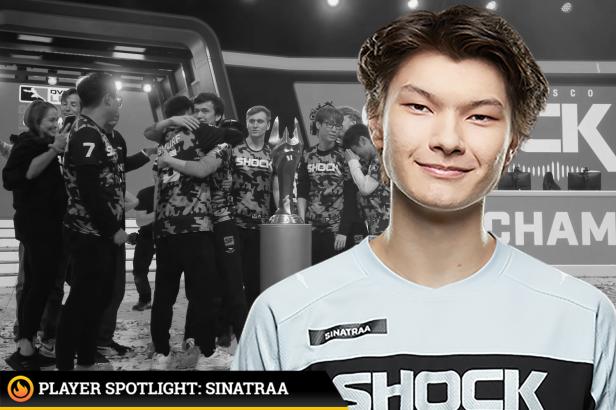 Sinatraa started his esports career at just 17 years old, but has already retired and moved on to another game.

Jay “Sinatraa” Won entered the Overwatch League at only seventeen, when he wasn’t even eligible to play in Overwatch League matches. Nonetheless, he was signed by the Shock to a headline worthy $150,000 contract, making him one of the highest paid players in the Overwatch League, despite being relegated to the bench. When he did finally get to play, he quickly proved to be worth every penny of his salary.

Sinatraa went all the way to the top of the Overwatch League, winning the 2019 Season Championship and 2019 Season MVP award, followed by winning the World Cup Gold Medal and MVP award. After such dominance in Overwatch, people expected him to play in the Overwatch League for years to come, but his ambitions stretched beyond just Overwatch. He wanted to be known as one of the greatest competitors in the world and what better place to do that than in the newest esports proving ground: VALORANT.

Hailing from Seattle, Washington, Sinatraa played baseball in high school before dropping out to pursue professional esports at the age of 16. He ranked second on Overwatch’s Competitive Season 2 North American leaderboard and made a name for himself on the ladder as a fierce, sometimes toxic, DPS player.

In October of 2016, Selfless Gaming signed Sinatraa to his first professional gaming contract. He played with Selfless throughout their golden age, when they became known for the “Selfless composition,” an ironically named composition which relied on individual mechanical skills over teamwork. The explosive composition highlighted Sinatraa’s raw talent, which helped set him up to be recruited for the upcoming Overwatch League, which was scheduled to start the next year.

In 2017, the 17-year-old Sinatraa was on the cusp of OWL eligibility. The inaugural Overwatch League season was set to start in early 2018 and Sinatraa was in high demand from teams looking to field the best candidates in the world. Eventually this interest sparked a bidding war between a number of organizations seeking to sign the prodigy. In the end it was NRG, the owners of the San Francisco Shock, who signed Sinatraa to an impressive $150,000 contract, earning him the title “Mr. 150k.” 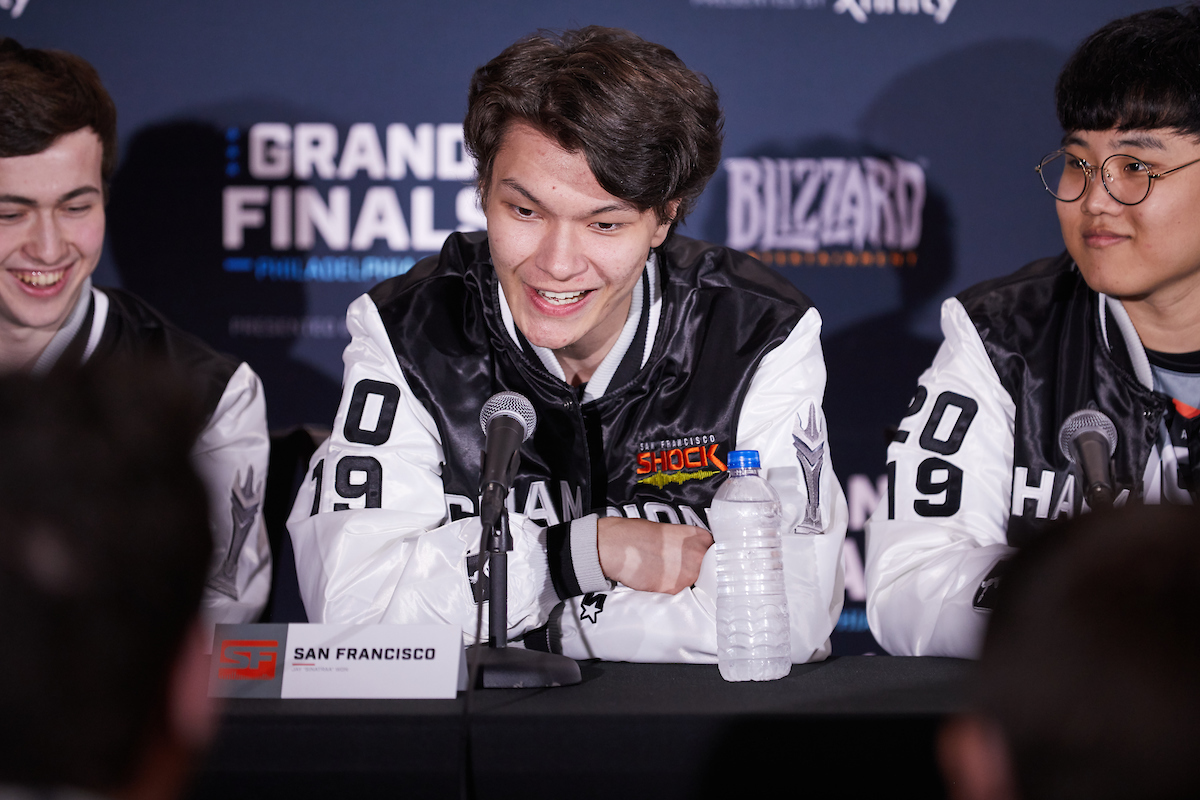 Sinatraa was forced to sit out the first half of the season, while they waited for his birthday. On March 21st 2018, Sinatraa finally made his debut against the Florida Mayhem. The match did not go well for the Shock, who had also debuted newly signed support player Grant “Moth” Espe alongside Sinatraa. In the end, Florida defeated the Shock 3-2. It wasn’t quite the debut Sinatraa was looking for, or was hyped up to be.

Sinatraa discussed that experience in an interview, explaining: “The pressure was pretty crazy honestly, because everyone was hyping me up. I actually thought I would just carry 1v6 and did stupid things in the game. I think I let the comments get into my head, which left me feeding almost.”

Despite the massive hype surrounding Sinatraa, his presence on the active roster wasn’t able to turn the tide on what turned out to be a disappointing inaugural season for San Francisco. However, heading into the second season the Shock were sporting an impressive lineup. With their new coach Dae-hee “Crusty” Park and new talent like Sinatraa, Matthew “Super” Delisi, and Hyo-bin “Choihyobin” Choi, the Shock were already looking like a huge threat for the 2019 season.

Throughout season 2 of the Overwatch League, Sinatraa was forced to play both DPS and tank heroes. During most of the season, he played Zarya in the GOATs composition, which featured 3 tanks and 3 healers. The Shock proved to be dominant in the GOATs meta, in no small part due to Sinatraa’s incredible aim tracking abilities, energy management, and calculated Zarya bubbles. From early in the season, Sinatraa put himself forth as a very obvious candidate for MVP.

In the lead up to the playoffs, Blizzard instituted the role lock for the express purpose of killing off the GOATs meta, which had stuck around too long despite Blizzard’s most desperate attempts to nerf it. The role lock feature required teams to play two tanks, two DPS, and two healers. As a result, Sinatraa was back on DPS heroes heading into the playoffs.

When the 2019 playoffs began, it quickly became apparent that the playoff meta would revolve around an Orisa and Sigma frontline. This was during the original version of Sigma, who had 1600 health on his barrier. As a result of the dominance of barriers, Doomfist rocketed to the top of the DPS meta since he is relatively unaffected by shields. Luckily for San Francisco, Sinatraa proved to be the best damn Doomfist in the league.

Led by Sinatraa’s incredible Doomfist plays, the Shock rolled through the playoffs. They lost one (amazing) match to the Atlanta Reign, but following that setback they won every single map eventually defeating the top seeded Vancouver Titans to win the 2019 championship. In his first full Overwatch League season Sinatraa had already accomplished his goal of winning a championship. 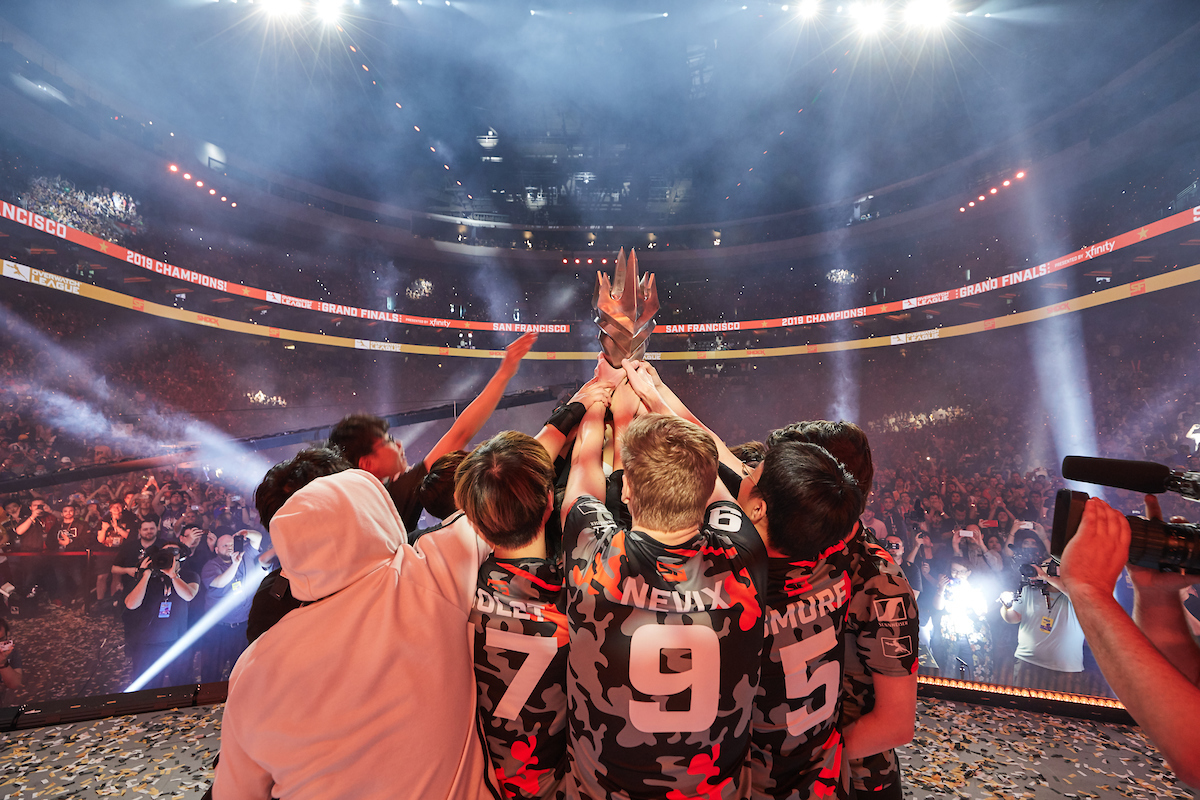 Near the end of the season, there was a lot of buzz surrounding the MVP decision. Many favored Sinatraa for the honor, but some questioned whether he was the right candidate. No one questioned his skills, instead they questioned his moral character. Throughout the years Sinatraa had insulted other players on Twitter, teabagged opponents, and generally mistreated other people. However, he was clearly deserving of the award if you looked solely at his gameplay.

The Overwatch League ended up naming him the season MVP anyway, though the OWL broadcast team went out of their way to argue that Sinatraa had experienced tremendous personal growth and redemption between 2018 and 2019. 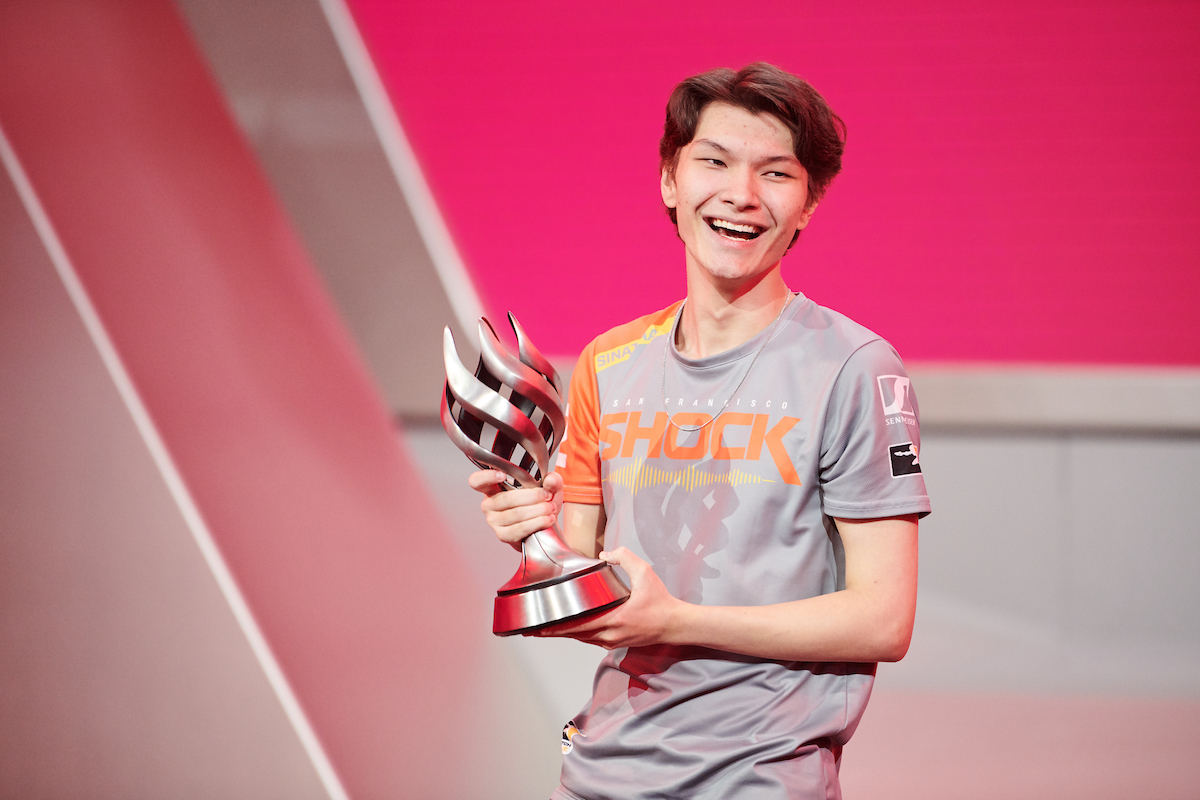 Although Sinatraa had just completed an amazing 2019 season, he wasn’t done kicking ass. He returned to the U.S. national team for the 2019 Overwatch World Cup in November. Coming into the World Cup, the United States team was determined to finally take home a medal. Sinatraa played on the 2017 and 2018 U.S. World Cup teams as well, but both of those years America came up well short of earning a medal, much less winning the gold medal. In 2017, they dropped to South Korea in the quarterfinals and in 2018 they suffered a rather embarrassing loss to the United Kingdom in quarterfinals.

But 2019 would be the year. The United States managed to go undefeated in their group stage, raising some eyebrows by qualifying above the heavy favorite, South Korea, who were in the same group. As a result of their great group stage, America received a bye to the semifinals where they went against South Korea, who had won the World Cup in both the previous two years. Despite coming in as the underdog, the United States somehow managed to pull out a decisive win against the stacked Korean roster. For the first time in Overwatch World Cup history, someone had dethroned South Korea and the United States was guaranteed a medal, at the very least.

In Finals, the U.S. were pitted against the Chinese national team, which was headlined by 2020 MVP candidate Ou “Eileen” Yiliang, who currently plays for the Guangzhou Charge. In the end, the U.S. easily secured the Gold medal over China in a very compelling 3-0 sweep to earn the Gold. On top of being a part of the winning national team, Sinatraa was also named the 2019 World Cup T-Mobile MVP. 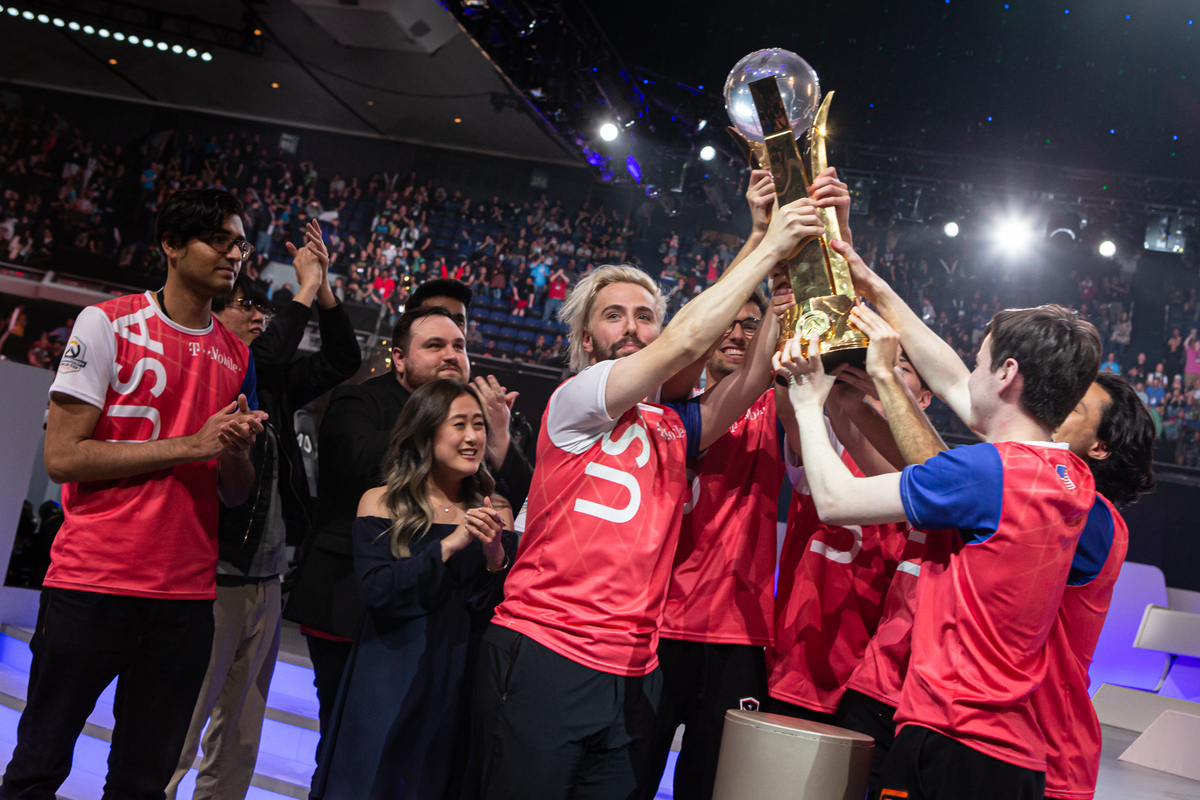 Moving on to VALORANT

The Shock entered the 2020 season as the heavy favorites. The season got off to an odd start.  The pandemic delayed the start of the Asian Pacific region and eventually forced the cancellations of North America’s homestands as well. On top of these transitions, the Overwatch League implemented a brand new hero rotation feature, which banned four heroes every week from the hero pool, forcing teams to adapt to a constantly evolving meta.

In April, after a mysteriously poor performance against the L.A. Valiant and the L.A. Gladiators, Sinatraa announced his retirement from the Overwatch League, citing a lost passion for the game.

“I don’t know what the real killer was for me, maybe it was 2-2-2 lock or maybe it was bans, I’m not sure.” Sinatraa explained in his retirement Twitlonger. “I just know it was hard for me to log on to play and I didn’t have fun in scrims/ranked at all anymore. I did not make this decision in one day, it took a full month of non stop thinking every day and sleepless nights from being so stressed.” 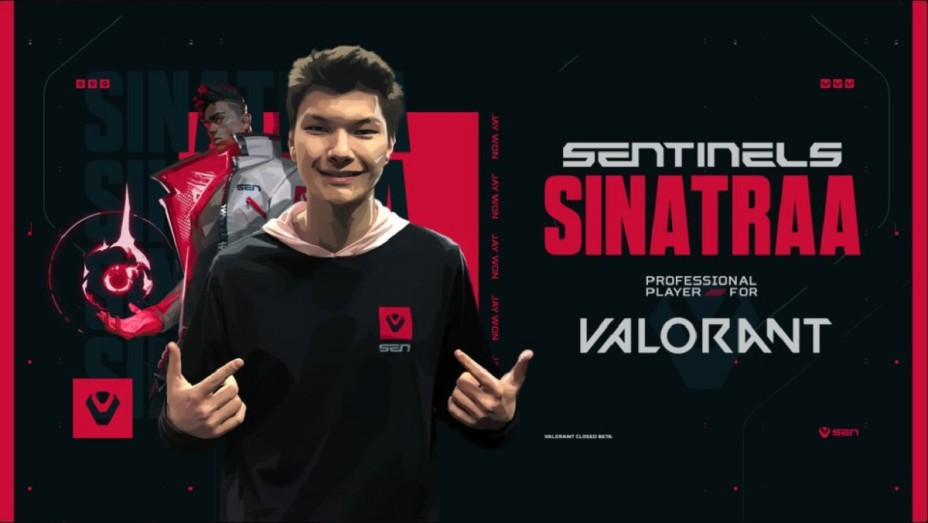 “The move to Valorant is no doubt a huge step in my career, and I couldn’t be more excited about the opportunity.” Sinatraa explained in the press release. “When I saw the team that Sentinels has put together, with so much experience from different esports, I knew that this was the right place to go and I’m excited to be at the front of it. To all my fans who have supported me over the years, the future feels really bright right now and I can’t wait to show everyone what we can do.”

The VALORANT esports scene is still in its infancy. Since the release of VALORANT the Sentinels, led by Sinatraa, have won a few B-Tier online events and most recently came in second to the TSM at the Ignition Series FaZe Clan Invitational. During that event the Sentinels had the opportunity to play against and defeat the newly announced FaZe team, which is in part made up of Sinatraa’s former teammates from the U.S. Overwatch World Cup team.

His true tests in VALORANT are still yet to come, since no majors have been held or even announced. But Sinatraa’s mechanical skills are hard to deny, regardless of the game. The young prodigy will no doubt excel in VALORANT just as he did in Overwatch.