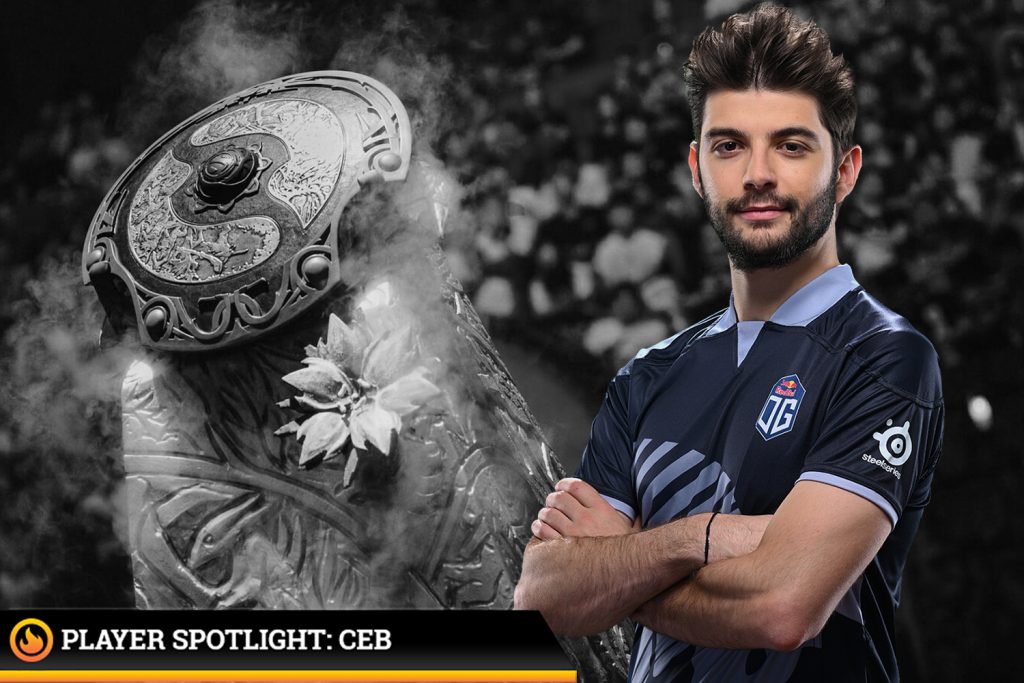 Ceb's career has seen him need to be adaptable, as the Dota 2 scene has had plenty of twists and turns to throw at him.

The most iconic moment of OG’s TI8 winning run is, without a doubt, the infamous “CEEEEEB” play against PSG.LGD in the finals. The team fight looked like it had gone poorly for OG. Johan “N0tail” Sundstein is dead, a risky engagement saw four members of LGD turn and kill him. Anathan “ana” Pham is in trouble – his Phantom Lancer could probably handle LGD, but he needs support. Jesse “JerAx” Vainikka dashes in on Io, and he can keep ana alive while Topias Miikka “Topson” Taavitsainen deals damage from the flank. Late to the fight, Sébastien “Ceb” Debs on Axe is almost deleted by Yang “Chalice”‘ Shenyi on Bloodseeker before he can contribute. He’s zoned from the fight further by LGD’s fed Enchantress support, so he smokes, and seemingly retreats to lick his wounds – And then it happens.

Blinking in and casting Berserker’s Call, Ceb taunts the two remaining LGD carries, dying in the process. His maneuver gives ana the time to deal enough damage to win the fight outright, leaving only a panicking Enchantress and a Morphling, who must teleport back to defend the Throne, alive. Coupled with Owen “ODPixel” Davies’ unmistakable call, a legendary moment in Dota 2 was born.

Yet, before his pair of TI wins, much of the first half of Ceb’s career was characterized by poor results. A failure to live up to potential and expectations despite often being surrounded by some of the very best the game had to offer. With his playing days seemingly cut short again and again with moves to analyst and then coaching roles, Ceb seemed destined to orchestrate great things for others, rather than achieve them himself.

However, fate had a different path in mind. Ceb would go in just two short years from a retired former-player to a two-time TI champion, and one of the most successful players in Dota 2.

Before there was Ceb, there was 7ckngMad. The profanity filter-dodging name belied a player whose in-game performance was often calculated and macro orientated. Entering the pro Dota 2 scene in 2011 at 19 years of age, his initial run with his first squad Team Shakira saw the lineup immediately draw the attention of Belgian esports organization Western Wolves. After a hectic three months, with constant roster changes, 7ckngMad left WW to join Defense of the Ancient’s veteran Troels Lyngholt “syndereN” Nielsen on mTw, a recreation of a legendary early 2000’s esports organization.

The next two years were characterized by a series of rapid moves between teams that took 7ckngMad from player to his first coaching role. After landing at DD.Dota, 7ckngMad, found himself on a six-man roster where he was relegated to a position as a hybrid coach, manager, stand-in, and really anything that the main lineup couldn’t do for themselves. But despite being a hint of what was to come, his initial foray into coaching was short lifted, with 7ckngMad returning to the main roster ahead of TI3.

But after a disappointing run through the wildcard round of that tournament, 7ckngMad was back in the wilderness, moving from team to team with little progress in his career. Despite this, the talent and insight of 7ckngMad was slowly gaining him the reputation as a great mind in the game, even if his in-game performance didn’t appear at the time to replicate the same brilliant. Between then end of 2013 and 2015, Ceb bounced between seven different rosters, unable to find a home.

His big break would come at the start of 2015, though, with a place on legendary TI winning organization Alliance. Impressed by his game knowledge, the team picked him up in an attempt to shake things up following a series of unimpressive results last year. But after failing to qualify for TI5, there were already rumblings of roster changes. Despite top-five finishes at several Majors before the end of the year, 7ckngMad’s time with Alliance would end in just under six months, with little to show for his time on a top roster.

With poor results over the next six months on teams such as Monkey Freedom Fighters and Kaipi, no one would blame Sébastien Debs for looking for other avenues to continue on in esports. With his keen level of intuition and game knowledge, analysis was a natural calling for 7ckngMad, who made his debut at the now infamous Shanghai Major.

Despite that even being marred with technical issues, poor talent relations, production problems, and going down in history as one of the worst major Dota tournaments ever broadcast, the Shanghai Major would be a new beginning for 7ckngMad. Impressed by his analysis and instantly gelling with his personality, OG picked up the retired player as their new coach.

OG had been struggling, as ever, to turn their roster of proven talents into a winning lineup. The team had pulled off some impressive victories in Shanghai, topping their group. But the team struggled against opponent’s they had every right to beat in the playoffs and fell to Fnatic in the lower bracket. But 7ckngMad saw potential in the talented roster and over the next three months, orchestrated a complete turn around in the squad.

The team won the Dream League Season 5, The Manila Major 2016, and ESL One Frankfurt 2016 in the space of a month, and headed into TI6 favored to make it deep into the playoffs. Even a disappointing 9th-12th place finish there didn’t stop this incredible run though, with the team securing the Boston Major later that year, and the Kiev Major in March of 2017.

There was just something about 7ckngMad that got players to work well together. It wouldn’t be until much later when increased exposure from TI victories allowed us better access to the player, that we discovered why. Ceb’s insatiable motivation, his unique outlook on wins and losses, and his ever-positive spin on things pushed players to achieve more than they expect. When his team wins, he would critique every element, knowing the players could handle it because they’d just won. When they lost, he’d find the good parts of every player, and spin it with that old competitive phrase: “They didn’t beat us, we lost.”

Ceb’s coaching legacy on OG is incredible for the relatively short period he held the position. Despite holding the role for just over two and a half years, he coached his OG to four Major victories and a slew of minor prizes. A TI victory would have cemented him as one of the greatest Dota 2 coaches in the game, but at TI7, OG only advanced just a single place further at TI7 than their previous event. As ever, in place of coaching, there was a different path for Ceb to tread.

A Return to Play

In 2017, at a small, yet notorious event, known as Midas Mode, 7ckngMad would return to pro Dota for a brief moment. In the midst of his incredible coaching run, OG was struggling with connection issues heading into the playoffs. With Roman “Resolut1on” Fominok unable to join the matches, it fell to the coach to fill in for his missing player. Things went… pretty badly.

Ceb was able to farm up on Necrophos in game one, but Na’Vi was relentless and quickly eliminated OG after several terrible games. The player known as 7ckngMad had hung up his keyboard and mouse over two years ago, and it showed. On the cast and in Twitch chat, there were plenty of jokes from casters and fans. The general gist was that “OG threw the game because they had a washed-up coach stand-in.” There was plenty of “322” spamming, and a general feeling that OG wasn’t taking things seriously if they chose 7ckngMad as a replacement over an active pro player. It wasn’t expected that Sébastien Debs would be coming out of retirement anytime soon.

Fast forward to March 2018, Resolut1on, who 7ckngMad had filled in for at Midas Mode, left the team. With few options for replacements, the coach acts as a stand-in. Then at ESL One Birmingham, and OG gets hit with one of the most controversial player departures of all time. Fly and S4 jump ship to EG with just days before the start of the event, leaving little option but for 7ckngMad to make a full-time return to active play.

Initially, things seemed to be getting to 7ckngMad, who lives up to his name in pubs, and is embroiled in a toxicity scandal. However, by August, it was official, and under new handle Ceb, OG headed to TI8 with Sébastien Debs as their starting offlaner.

TI8 was an incredible run for many reasons, but as far as individual stories, Ceb’s is probably the most amazing. A retired pro, who’d all but given up playing, returned and won it all. Not only that, but he’s also immortalized with a voice line that’ll echo down the annals of Dota history. In the tournament, he was far and away one of the teams more consistent players. Rookie Topson struggled, and N0tail seemed committed to dying in almost every engagement. Ceb, as offlane, had a lions-share of weight to pull, to take the pressure off Topson, and facilitate ana. All the time farming up and contributing in team fights.

After OG’s post-TI break, the team returned to form in a kind of middling, unimpressive fashion. They were still outstanding, but no one expected them to repeat. After all, they only took part in two tier one events in the entirety of the 2018-2019 season. Ceb’s role, as ever, was motivator and, somehow, despite missing the spark they needed all season, at TI9, it was time to make history.

Ceb’s effect in TI9 is fascinating. In game, teams frequently gave his play far more respect than at TI8, unwilling to tri-lane or leave him to farm as they often did before. Perhaps the fact that his name sits on the voice line wheel, spammed every time OG got a kill, acted as some kind of Pavlovian training. If you see or hear the words “CEEEEEEB”, you’re in trouble.

But what the victory at TI9 proved was not just that Ceb was a great player, but that he was one of the greatest minds Dota 2 has ever seen. Orchestrating and encouraging players through two Aegis victories is no mean feat, and becoming a notorious player while doing it is even more impressive.

Although Ceb stepped back from the main roster, after an even more extended break at the end of 2019, he stayed with the OG organization. There, he was able to contribute to OG’s other games and teams, particularly the CS:GO team, where his management style and motivation has proved invaluable for a squad trying to compete on the highest level.

Once again, Ceb was thrust into the playing as the global coronavirus pandemic shifted Dota 2 into online tournaments. With Topson unable to compete in many of these events, and others struggling with connection issues, Ceb returned to the team, on top of coaching and managing other parts of the organization.

Then, of course, there’s his triumphant return to the main roster at the end of 2020. OG had shocked the world with the reveal of Syed Sumail “SumaiL” Hassan as their new carry in January. But with results few and far between, OG has returned to what works: Ceb’s tactical genius in the offlane.

With no TI for Ceb to miraculously win in 2020, the year will likely be a chance to hone his talents. Describing his motivation to play in a recent interview, Ceb said he was “offended” that teams thought they could beat OG. As ever, Ceb’s attitude remains unique, taking offense at his challengers’ audacity, not understanding how they could mistake his absence for their improvement. This could be seen as cockiness, but then with two Aegis hanging on the wall, it’s hard to be humble.