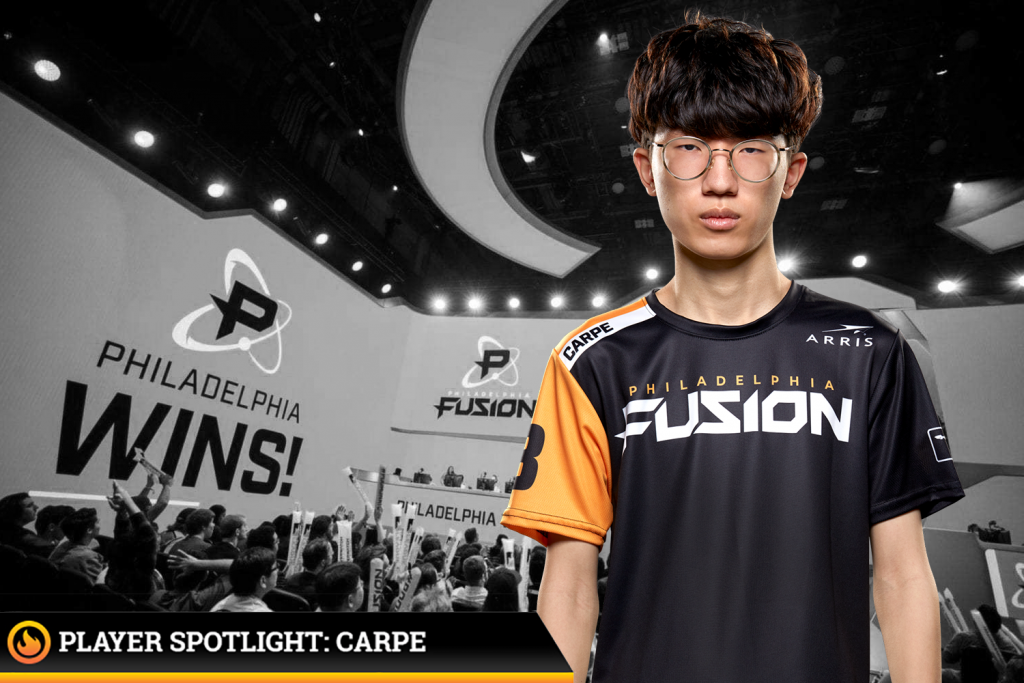 Since his start in Overwatch in 2017, Carpe has certainly lived up to his name.

In an interview following the 2018 Overwatch World Cup, Jae-hyeok “Carpe” Lee  described his strength as the ability to “create an unexpected event that can turn the game around.” Since joining professional Overwatch in late 2017, the 21-year-old DPS player has been building a reputation as one of the most deadly, versatile and reliable DPS talents in all of Overwatch.

Carpe’s name is obviously in reference to the Latin phrase “carpe diem” – “seize the day”. In his early Overwatch years he collaborated on the name with his friend and fellow Overwatch pro, Min-seong “diem” Bae who currently plays for the Shanghai Dragons. Throughout the past few years, Carpe has lived up to the aspirational name, seizing every opportunity to prove that he is one of the greatest DPS players in the world. Throughout the first half of Overwatch League (OWL) season 3, he has already set historic milestones and helped his team achieve an impressive 15-1 OWL regular season record.

According to Carpe, he was destined to compete professionally in something. In an interview from 2018, he stated that he was originally interested in becoming a professional speed skater and won multiple speed skating competitions in South Korea before focusing on building his professional esports career.

After BK Stars, Carpe briefly competed with the American esports organization Selfless Gaming on a trial basis. The stint was short, only lasting from June to July of 2017. Selfless entered the Overwatch competitive scene early, and, ironically, pioneered an aggressive style which relied on players’ individual skill over “selfless” teamwork. While competing with Selfless, Carpe briefly played alongside former Overwatch League player and 2019 OWL MVP, Jay “Sinatraa” Won.

In November of 2017, the Philadelphia Fusion announced their first ever roster for the upcoming inaugural Overwatch League season and Carpe was among the initial 12 players. During the first season, the Fusion experienced tremendous success, eventually competing in the season 1 Grand Final match, losing to the London Spitfire.

The Fusion’s impressive run to Grand Finals in season 1 was in no small part due to Carpe’s incredible mechanical skills on heroes like Tracer, Widowmaker, and Hanzo. Carpe was an unstoppable machine of damage throughout the season, serving up clutch after clutch, demonstrating tremendous flexibility in the DPS role. He was able to win sniper duels with the best hitscan in Overwatch, only to switch over and dominate the flanks with Tracer in the same game. His sheer versatility made him an extraordinarily valuable player, even before the introduction of hero pools.

The inaugural season featured a dive meta, which relied on high mobility heroes who could quickly take highground and sought to overwhelm enemy players with raw mechanical skills. This playstyle suited Carpe, whose playstyle prioritizes “popping off” over carefully executed plays. Although the 2018 T-Mobile OWL MVP award went to Sung-hyeon “JjoNak” Bang for his incredible Zenyatta, Carpe was one of the leading contenders for the MVP during season 1.

After season 1, Carpe had proven he was one of the best Overwatch League players in the world. As a result, he was invited to join the Korean Overwatch World Cup team in 2018. South Korea won the 2016 and 2017 World Cup, so he had some big shoes to fill.

The Korean team dominated the Icheon Qualifier and during the Overwatch World Cup proper, they didn’t drop a single map. They swept Australia in the Quarterfinals, the United Kingdom in the Semifinals, and finally China in the Finals to be named the 2018 World Cup champions, marking their third World Cup championship in a row.

A Season of Struggles

After his incredible success in season 1 and in the World Cup, Carpe entered season 2 with high expectations thrust onto him. Unfortunately for a DPS players like Carpe, the GOATs meta was dominant in the Overwatch League for much of 2019. The meta at the time was a three tank, three healer composition which relied on keeping tanks alive and winning brawly team fights.

In an interview he did with the Overwatch League in 2019, Carpe stated, “If I could play DPS, it would be very happy for me, but this is meta and we are pro players.”

.@carpe_ow’s superstar status is a result of his work ethic and the many adaptations he’s made in his career.

The GOATs meta did not reward Carpe’s clutch focused playstyle which is built around utilizing sheer mechanical skill to pull off kills. Winners in the GOATs meta were determined not by individual skill, but by how well a team worked together to win a long war of attrition.

Throughout season 2, Carpe was forced to play Zarya. To be fair, Carpe’s Zarya was incredible, but he wasn’t able to backpack his team and turn around team fights as often as when he could while playing his signature hitscan heroes. In the matches where he was able to play his Widowmaker or Reaper, he was just as impressive as ever, but those matches were few and far between.

The Fusion managed to place in the top four in stage 1 of OWL season 2, but they struggled to find success throughout the rest of season 2. They ended the 2019 regular season with a 15-13 record and ultimately ranked 11th-12th in the Overwatch League 2019 Playoffs after losing to the Shanghai Dragons. As a result of their struggles, Carpe’s brilliance faded from the spotlight.

A Season of Redemption

After a disappointing season 2, Carpe and the Fusion regrouped in season 3. The new season brought with it role lock, which forced teams to select two tanks, two healers, and two damage players. This new system reinvigorated DPS players, who were finally able to return to their signature heroes. With the return of DPS, Carpe rocketed back into the spotlight.

Throughout the first half of season 3, Carpe returned to form, showing off his ability to clutch out team fights with ridiculous Widowmaker flicks and ambitious Tracer Pulse Bombs. The introduction of Hero Pools in March only strengthened Carpe’s value for the Fusion, since he had already made a name for himself as the most flexible player in the league. No matter which DPS hero is banned, or what the meta ends up being for a particular week, Fusion fans can rest assured that Carpe is going to be comfortable.

Carpe even showed that he can win games using Torbjorn, a character that was considered a meme for a long time. During week 9 of season 3, Torbjorn became a valuable pick because Mei had been rotated out of the hero pools, and Torb’s ultimate serves a similar function to Mei’s ultimate. Carpe had played Torbjorn before, during the Overwatch World Cup, even when he was not the meta. As a result, he was more than prepared for the Torbjorn meta.

In week 9, Carpe ended up dealing 14,000 damage/10 minutes on the hero against the Washington Justice. At one point during the series, Carpe even humiliated the rival Torbjorn with his hammer, after which he wrote “sit” in the game chat. The enemy torbjorn, Corey “Corey” Nigra, took the friendly trash talk well, responding with “LMAO.”

In addition to his single-handed production of Overwatch League highlight clips, in season 3 Carpe became the first Overwatch League player to reach 4000 final blows in the Overwatch League. This accomplishment speaks to how influential and consistent his DPS play has been throughout his OWL career.

As Overwatch League moves into the second half of the 2020 season, Carpe is once again near the top of the list for MVP candidates. His raw mechanical skills, versatility within hero pools, and his ability to turn team fights around have been crucial factors in the Fusion’s success so far this year. There is still a lot of Overwatch to be played before the 2020 MVP will be named, but Carpe will definitely be a part of that conversation when the time comes.