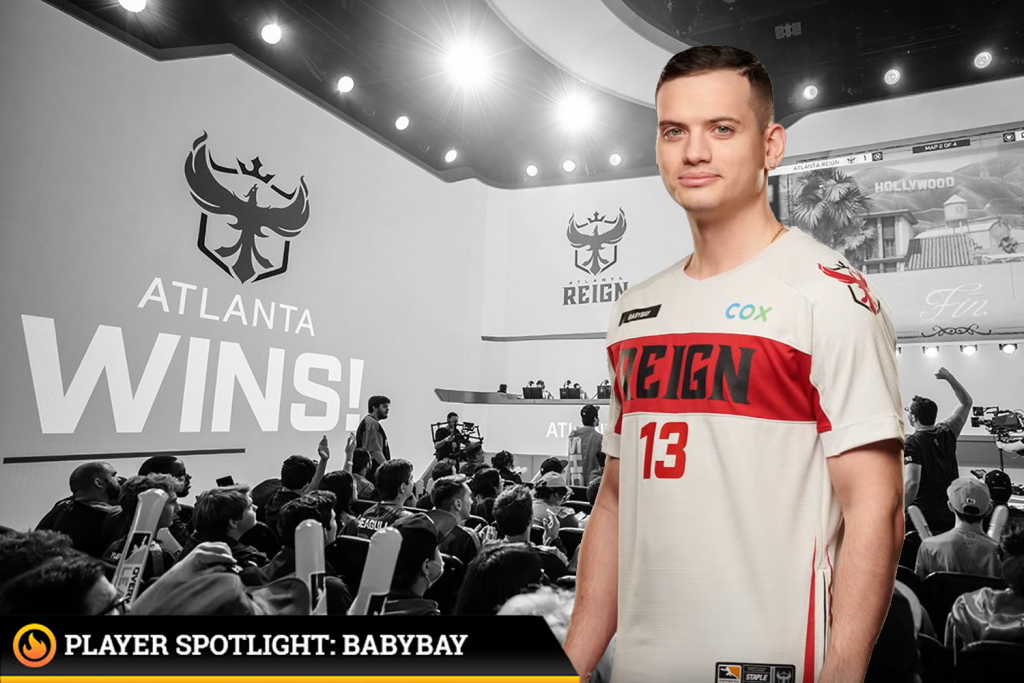 Babybay’s career is defined by constant evolution and a willingness to wear his heart on his sleeve.

First impressions are hard to overcome. Despite the illogic of a snapshot judgment, those initial feelings always inform heavily how a person is perceived.

When it comes to Andrej “babybay” Francisty, that first impression is misleading, or at least it fails to capture the totality of babybay as a competitor and a personality. When taking in babybay for the first time, what stands out is a style and swagger that’s rare in esports. From the well-manicured hairline and signature jewelry to his alpha-male personality, babybay could just as easily star in an MTV reality show as on the OWL stage.

Peel back the layers of bravado and a fuller picture begins to emerge, one of a player who cares deeply about his craft and his place within a team. Over the course of three years in the league, babybay consistently adapted his game and developed into a true leader. He went from a braggart whose mouth overshadowed his skill to a grinder who refused to let the game pass him by.

Andrej ' @KING_Babybay ' Francisty, a three-year veteran of the League since it's debut ranging from the San Francisco Shock to Atlanta Reign has played his final game and is now officially retiring from Overwatch League.

“I think that’s the process everybody goes through with babybay,” said Atlanta Head Coach Brad “sephy” Rajani during the Reign’s mini-documentary, A KING’S REIGN, celebrating babybay’s career after he announced his retirement from Overwatch.

“In the beginning, you’re not sure if you can really get along with this guy. Then he just grows on you, man, like a weed, but I think everyone that eventually gets to know babybay falls in love with him.”

In 2016, babybay was looking to shake off a stigma. The year prior, he had been caught cheating in CS:GO and got banned live on stream during a now-infamous ESEA match. In esports, that’s the kind of thing that sticks with you – even if you pick up a new game and change your name, as babybay did when he dropped the tainted moniker “flex” and moved to Overwatch.

Babybay found his home in the early days of Overwatch with Kungarna, a player-owned org that eventually graduated its fair share of OWL talent. With firebrand personalities like babybay and future Reign teammate Dustinn “Dogman” Bowerman, Kungarna was always going to be polarizing. Throw in the perpetual drama-storm that was team owner Michael “myKL” Padilla, and you’ve got a team that was half Overwatch team and half wrestling heel.

Despite their big talk, Kungarna didn’t really deliver, even in a North American scene that saw several of the top teams traveling to Korea for APEX. They never finished higher than third in any tournaments of note and consistently found themselves just out of reach from the region’s best.

For his part, babybay was a bright spot on Kungarna. His raw mechanics were ideally suited to Overwatch’s hitscan roles, but he quickly established himself as one of the best all-around DPS players in North America. When the time came for the OWL’s Inaugural Season, babybay was snatched up by the San Francisco Shock.

“First game, we went out to dinner before with the whole team,” recounts Shock owner Andy Miller. “I said ‘Who’s gonna get the first kill in Overwatch League?’”

“Of course I’m gonna get the first kill,” came babybay’s response, incredulous that the question was even up for debate. He backed it up by going out the next day and doing exactly as he said he would. That’s babybay in a nutshell, a player chiseled out of pure moxie, supremely confident in his own abilities.

In game, things were largely the same as they had ever been, albeit with many more eyeballs watching. Babybay was a focal point for the Shock in the early days, much like he had been with Kungarna. Even as babybay popped off playing his signature Soldier:76 and Widowmaker, team success eluded the young Shock roster. 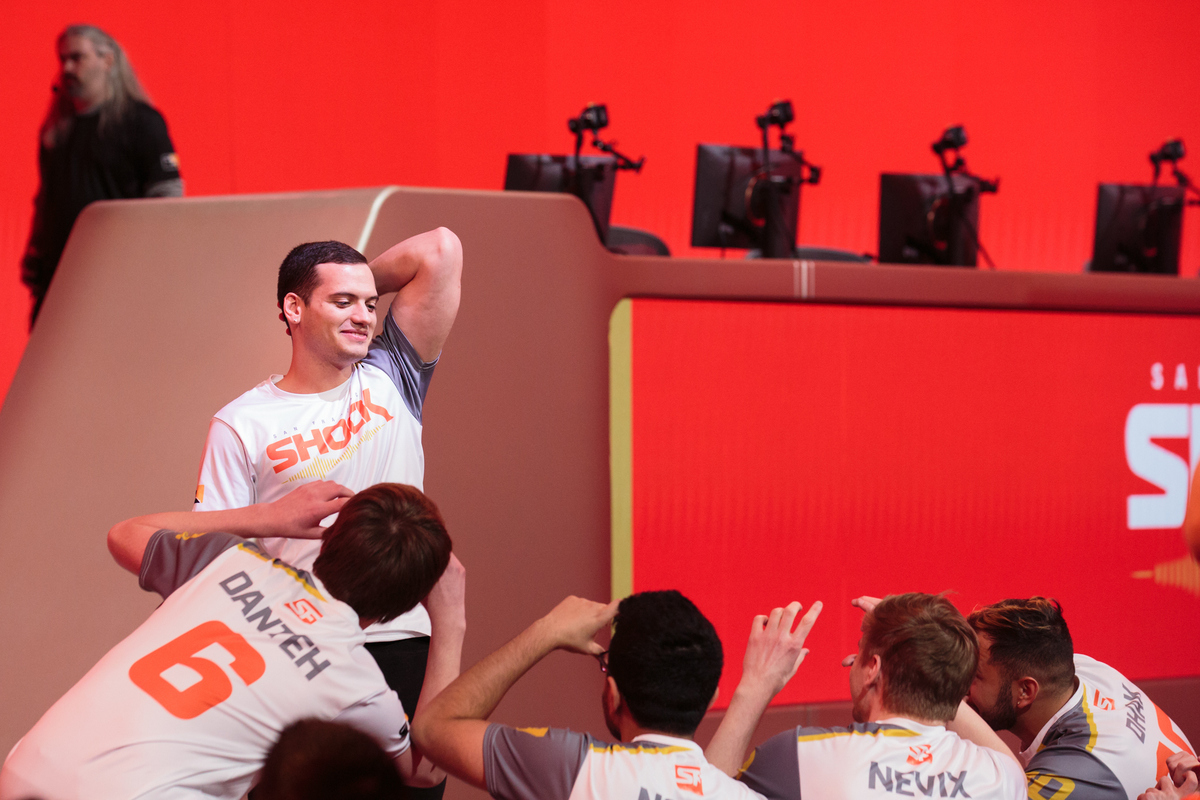 Babybay operated with a flair for the dramatic, playing an incredibly aggressive style, especially on the Widowmaker. His playstyle sometimes meant feast or famine for San Francisco, and the team struggled out of the gate. He led the league in damage per 10 minutes during that opening season, but he was also near the top in deaths. The Shock went on to lose 14 of their first 20 matches on the OWL stage, even as babybay tried to be the carry.

Beyond his explosive play, babybay started to build some cache as one of the league’s more personable stars. His popularity is perhaps best explained by the #BabybayChallenge. What started as a self-aware joke about babybay’s social media presence and pretty boy persona quickly evolved into something much bigger.

On the surface, it was simple and goofy, like many viral social media trends. Fans would mimic a shot of babybay posing dramatically and share the side-by-side. Babybay and the Shock seized the opportunity to promote their charity initiative supporting youth mental health.

It’s begun… Take a side by side picture that matches this photo, post and challenge at least one friend to do the same. For every #babybaychallenge post that tags @SFShock, we'll donate to Shock’s social initiative: youth focused Mental Health orgs in the SF/Bay area ⚡️ pic.twitter.com/jAfFd8dId3

It was the first high-profile case of an OWL player using their platform to start a conversation like this. It was also one of the first steps in babybay shedding some of the preconceived notions about him. Despite a rough end to his 2018 season, babybay had proven himself as a capable competitor and a marketable personality.

As the new season kicked off in 2019, the Shock were on the verge of greatness. The team had started moving away from babybay in Stage 3 of the previous year, and they had only further added to their DPS depth with the additions of DongJun “Rascal” Kim and NamJu “STRIKER” Gwon.

Babybay had been benched for much of the last two stages of 2018, and he fell out of the rotation completely in 2019. He describes it as a veteran player resting on his laurels after making it to the highest level of professional Overwatch. “I wasn’t practicing enough. I thought I didn’t need to practice,” he says. “Going through all this stuff made me grow up.”

Luckily for babybay, his old coach sephy had moved on to Atlanta, and the Reign were in need of a DPS player. Their star player, Daniel “dafran” Francesca, had just retired after a single stage of OWL play. He left a huge hole not only in the strategy and style of the Reign but also in the team atmosphere. 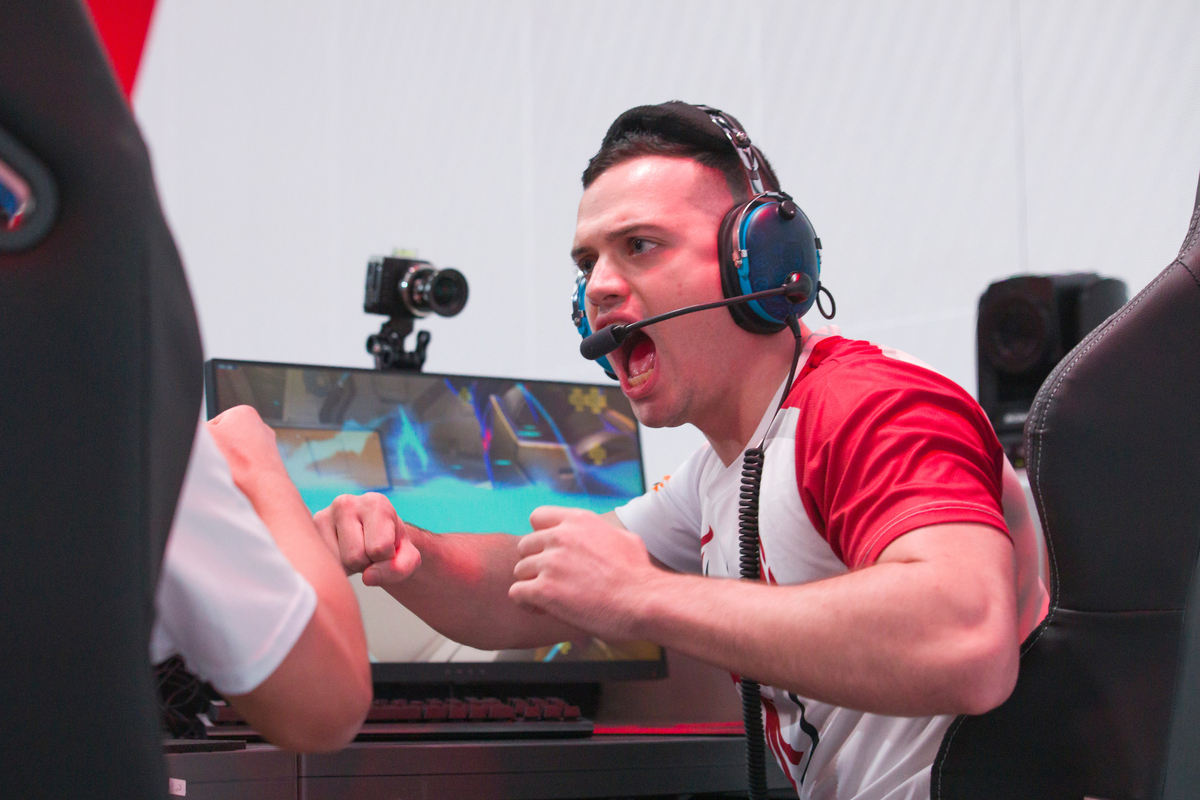 Babybay immediately found his place as one of the vocal leaders of the team alongside Dogman, and the Reign found an identity as a boisterous team that fed on the energy of the crowd and their own trash talk.

Though he struggled individually, thanks to the GOATs meta that pushed him into playing Zarya, babybay proved to be a crucial leader when Atlanta really needed it. “He was the perfect fit to come in and stabilize us,” said Reign CEO Paul Hamilton. “He had a great personality and that helped bring everyone together.”

Once the league implemented Role Lock in Stage 4, babybay was back on his natural role. Atlanta won their last nine games to sneak into playoffs as the sixth seed. With babybay playing Reaper as a primary damage threat, the Reign became the only team to beat the Shock in the playoffs.

The epic first-round series ended with San Francisco stepping off the cart to hand Atlanta the win. As babybay walked to shake the hands of his old team, he lifted his hands to his head in utter disbelief. Of course, the Shock would go on to win it all, and the Reign  would drop their next two matches en route to a quick exit. After the Shock had discarded him without a second thought, babybay had his redemption.

Coming into this season, there was a prevailing notion that history would repeat itself with babybay and he would be benched yet again. After a plucky first season, the Reign went out and picked up two of the hottest new DPS talents available in Taehun “Edison” Kim and Hugo “SharP” Sahlberg. Both occupied the same hitscan niche as babybay and most expected one of them to seize the starting spot alongside Jun “Erster” Jeong.

Instead, babybay had a resurgent season, showing that he can still hang with the best when it comes to hitscan threats. Though Atlanta hasn’t quite lived up to expectations, babybay stepped up his game massively.

On the whole, Atlanta have struggled to punch above their weight. They always manage to handle teams below them in the standings, but they crumble in hotly contested matches. Babybay has repeatedly gone toe to toe with players like JaeHyeok “carpe” Lee, but the Reign haven’t quite kept pace. 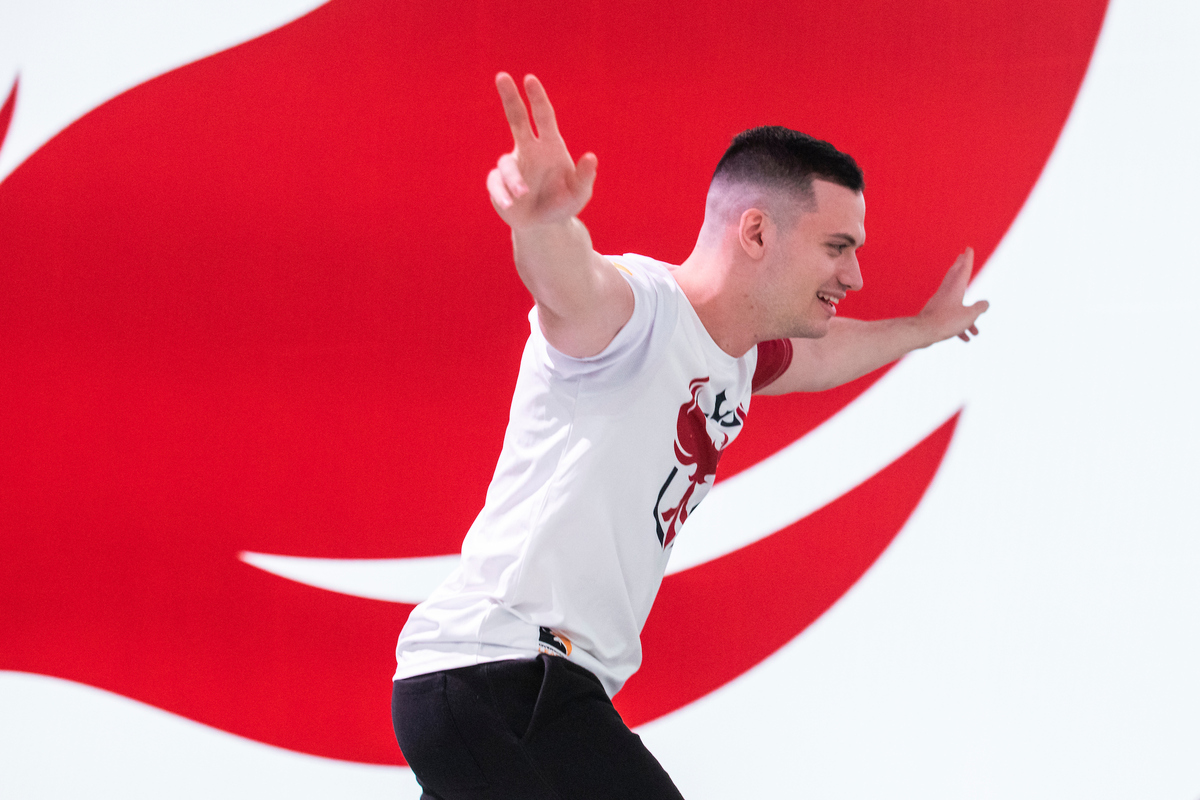 He still had the insane mechanics that got him to OWL in the first place, but now he had the experience to back it up. Where before he was the player who would take any duel, this year he played with a bit more restraint. He still died more than most, but he was less prone to reckless peeks and disadvantaged fights.

It’s a sign of the maturation process that babybay has undergone throughout his OWL career. Where once he was the individual star, the one who needed to carry the team to victory or defeat, now he has become so much more. Yes, he can still take your head off with Ashe or McCree, but he also sets the tone for the team.

So now with the luxury of hindsight, we know the first impression isn’t always on the money. Even if it’s not entirely wrong, it can paint an incomplete picture. So if babybay initially comes off as this smug, braggadocious pretty boy, then what is the lasting impact he leaves on the Overwatch League when it’s all said and done?

Babybay was never the greatest player on the planet. Truly, it’s hard to say he was ever an elite performer for an extended period of time during his three years in the OWL. What he was is one of Overwatch’s few great showmen. From the #BabybayChallenge to his 1v1 against Bren at the Atlanta Homestand, babybay understood the value of letting your personality through. His willingness to showcase himself and his admirable maturation ultimately made him a beloved figure in the community, even if it took some time to get there.

So if our first impressions can be so wrong, if babybay can turn out to be this amazing leader and awesome force of positivity, why do we keep trying to define someone in an instant? In part, it’s just human nature to quickly judge and categorize new stimuli, but there’s a second purpose.

When we’re wrong, we’re forced to take stock of our biases and blind spots. When someone defies expectations, they demand our attention in a way that leads to self-improvement. Few esports athletes have defied expectations like babybay, and for that, he’s an all-time great.