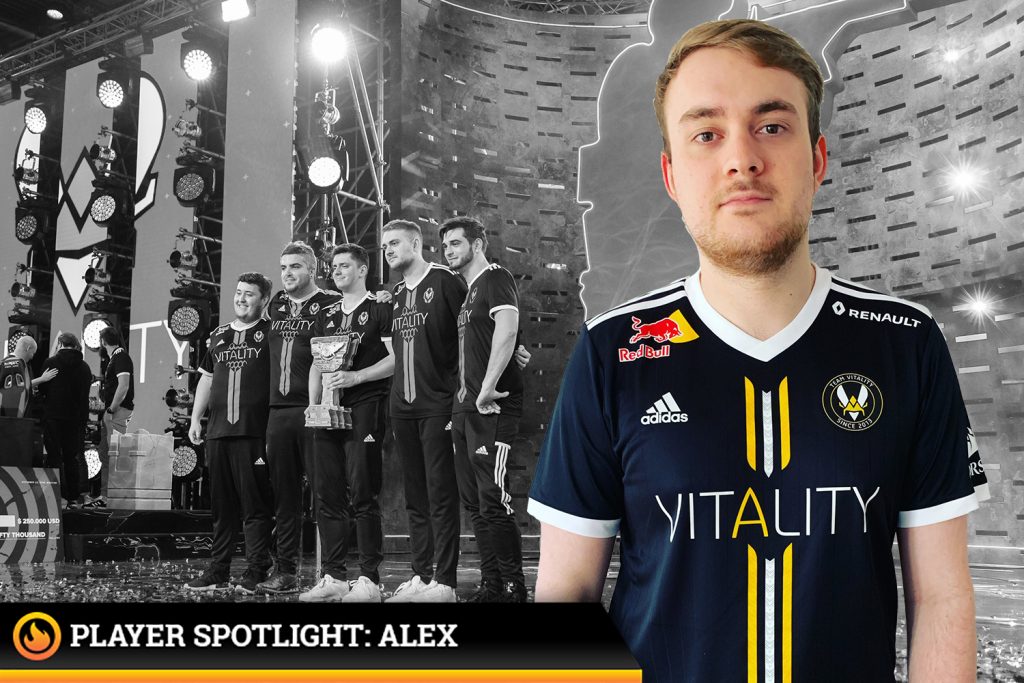 While some players from the UK have gone across the pond in search of success, less have made the quicker journey across the channel.

Alex “ALEX” McMeekin is a conundrum at first glance with a CS:GO career spent entirely within the French scene despite the Union Jack flying beside his name. ALEX has only recently resided in the UK after emigrating to France at the age of 10. While his grandparents lived in the country, he was far from fluent and barely spoke the language.

In a familiar tale in the world of Counter-Strike, a prematurely ended football career and an older brother into video games first introduced ALEX to the game. Counter-Strike fulfilled a dormant desire to compete while also providing an outlet to socialize in an all-new setting. Like so many of France’s most notable names, ALEX began playing Counter-Strike: Source before progressing to Global Offensive.

ALEX’s earliest CS:GO team was Evokate Gaming that competed during Season 14 of ESEA Open in 2013, qualifying for Intermediate while facing Clan-Mystik in the playoffs twice and winning both matches along the way. webSPELL Gaming was the first team ALEX joined in 2014 and the year saw humble successes including the Cap Arena 4 trophy as the 19-year-old Brit was one of a handful of notable promising talents rising in the French scene.

After ALEX and co. parted ways with webSPELL, melty eSport Club signed the players in 2015 and the team played in ESEA Main before qualifying for Premier after the Season 18 playoffs. During this climb up the leagues that year, ALEX faced LDLC White on multiple occasions including the ESWC 2015 qualifier at Masters Français du Jeu Vidéo, where melty fell short of making it to Montreal. melty released its male and female teams in December 2015 and while the squad initially stuck together under the name KAPPA, Robin “GMX” Stahmer’s ban for match-fixing saw ALEX and two other ex-melty members instead join Platinum-Servers at the start of 2016.

In April 2016, ALEX was recruited by LDLC as the organization disbanded its White and Blue divisions in favor of a new main lineup. Two former teammates in mistou and xms joined four months later and throughout his time on LDLC, familiar faces of 1.6 fame Steeve “Ozstrik3r” Flavigni and Julien “Krav” Hernandez took on coaching and analyst roles for the team.

During his time at LDLC, the team, in various forms, went on to win ESL Championnat National Summer 2016 and were under the leadership of iconic Belgian in-game leader Kevin “Ex6TenZ” Droolans who had been removed from G2 Esports in favor of former LDLC White player Alexandre “bodyy” Pianaro. 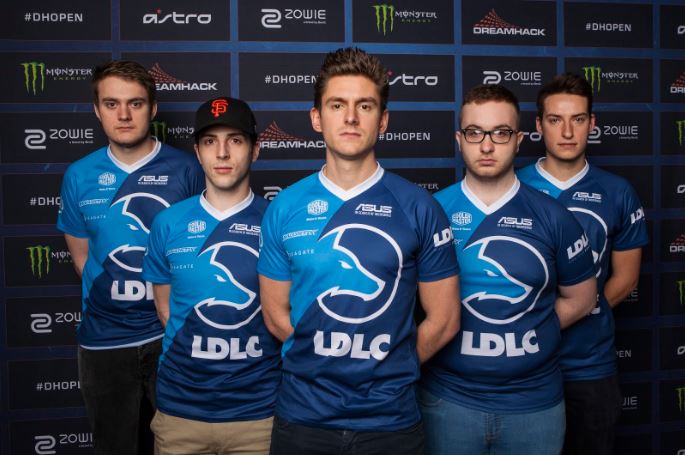 LDLC slowly climbed from Premier to ESL Pro League but it wasn’t until 2018 that many started to take notice of the overlooked third French team.  (Photo courtesy Jennika Ojala – DreamHack)

A conflict between Ex6TenZ, seen from the outside as a linchpin for the inexperienced roster, and the rest of the team saw the old guard usurped, placed onto the bench of LDLC in early February. While fellow veteran Mathieu “Maniac” Quiquerez was still present, it would be ALEX in the end to take over from one of the greatest leaders of all-time in a dramatic regime change alongside some new faces.

Former Misfits duo François “AMANEK” Delaunay and David “devoduvek” Dobrosavljević were firepower upgrades for the roster and this saw LDLC claim notable scalps in the latter half of the year and leave their mark on an unsuspecting group of top teams.

LDLC played a huge amount of online tournaments as well as smaller LANs, but IEM Chicago in 2018 would end up being a taste of things to come for ALEX.

After an internal error reduced the number of slots available in the NA Qualifier, the GG.BET Shuffle opened up an additional slot to Europe. Among the favorites were G2 Esports, OpTic Gaming and Heroic but it was Team LDLC that came through the Closed Qualifier that took the top spot and the place in Chicago after beating all three of them. 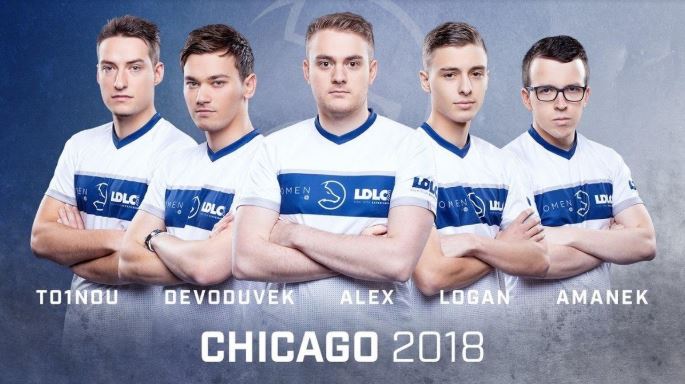 The initial 14-16 loss to FaZe Clan was expected, but a miracle run of victories through the lower bracket saw LDLC triumph over Renegades, North and NRG Esports to make it through to the playoffs. While Team Liquid knocked them out in the quarterfinals, LDLC and ALEX were suddenly in both the spotlight and the sights of the French scene.

His replacement, Rémy “XTQZZZ” Quoniam, was formerly the coach of webSPELL back in 2014 and also coached melty back in 2015. With Happy on the way out of Vitality, rumors began to swirl and were soon confirmed when ALEX was announced on December 28, 2018 and reunited with one of his first ever coaches in CS:GO.

Following the announcement of our roster changes, we're glad to welcome @Vitality_ALEX as a new member of our CSGO squad, please give him a warm welcome 🐝 #VforVictory pic.twitter.com/4Fao9F4zx3

Replacing France’s most successful CS:GO leader in a team stacked with legends of the scene and the most promising prodigy in the game, the pressure was on for ALEX who had been an in-game leader mainly contending at a lower tier of play.

With Happy, Vitality had flown into the Europe Minor which saw ALEX’s Vitality LAN debut take place at the IEM Katowice 2019 Major. The team came close to taking a Legends spot but were bested by Ninjas in Pyjamas, a retro defeat for a new French lineup.

Charleroi Esports 2019, a rare event on Francophone soil, was an easy trophy to claim and it had anatine company when Vitality became the champions of cs_summit 4 and ALEX came into his own as the sixth best player at the event with a 1.10 rating overall. He would consistently sit in the middle of the Vitality pack while ZywOo came alive even in the face of some of Counter-Strike’s greatest ever players.

While Astralis and Team Liquid battled for dominance at the top, ALEX was leading Vitality to new heights on their own upward climb with NBK also acting as a second leader for the squad. A preference for improvising and adapting to opponents while enabling ZywOo to do what he did best seemed to work better than NBK’s more structured vision long-term.

On home soil in London at the Esports Championship Series Season 7 Finals in 2019, Astralis fell early and Vitality steamrolled the playoffs, taking down NRG Esports and FURIA in clean 2-0 wins.

Here's to @Vitality_ALEX, the most under-rated IGL in CS:GO.

From the qualifier all the way into the Grand Finals of ESL One Cologne 2019, it was only the tidal surge of Team Liquid’s summer run that could put an end to Vitality in the Cathedral of Counter-Strike.

Team Liquid would crush dreams once again in the semifinal of IEM Chicago but qualification from MDL into ESL Pro League was some, albeit cold, comfort.

StarLadder Berlin Major 2019 – ALEX’s new system couldn’t be implemented, compromises had to be found but Vitality finished the tourney with a Legends spot secured. Outside of the server, conflict between the team and NBK saw the latter benched on XTQZZZ’s orders days after the run ended.

CSGO Update: we decided to remove @NBK from the starting roster. The team has shown amazing results but a change was needed as the squad in its current form, with 2 in-game leaders, reached its limits.

In the French scene, two players stood out as obvious candidates to join Vitality: Richard “shox” Papillon or Fabien “kioShiMa” Fiey. The latter would have been a no-cost, no strings option signing as he had been teamless since being released by Cloud9 earlier that year but instead, shox was brought into Vitality.

ZywOo was crowned the best player of 2019 but questions were raised over the longevity of the ‘hard carry’ he had to undertake on Vitality. The addition of shox, despite being a promising addition no longer required to lead as he did on G2, underwhelmed and did not lead to improved results for Vitality.

It was IEM Katowice 2020 that would mark his final outing for Vitality. While the year ended on a high with a win at EPICENTER 2019, increased travel demands for 2020 was a deal breaker that led to ALEX’s decision to step back from the team.

You may have seen the rumours fly around, I can now confirm that it’s true, I am moving away from playing at (cont) https://t.co/PVmddYzeAo

The demands of the highest level of competitive play stretch far beyond the game and what takes place in the server. A star player might feel pressure to perform individually but the in-game leaders are responsible for finding ways to reinvigorate those players, develop a system to enable their stars, maintain their own level and know that being scapegoated for any failure is just par for the course all while juggling a work-life balance in which you are rarely ever at home.

The ongoing coronavirus pandemic has seen all travel suspended across the world and many have lamented the irony of ALEX stepping back at this time. However, the downtime allowing for a true period of rest without pressure and the freedom to explore options and a new title in the form of Riot Games’ class-based FPS title VALORANT is something that would be difficult to achieve while on an active roster.

In terms of ALEX’s career, it is far from over and the same desire to compete that first saw him pick up Counter-Strike is still present. While LDLC was not considered the most prestigious or salaried or successful roster, the accomplishments and opportunities under them set ALEX up to take on the world.

Current LDLC OL has seen pickups from experienced veterans and unknown talent from the French scene but has failed to recapture the magic previous iterations of the team have had beyond another ESL National Championship title last year.

Could a return to a more online-focused team be the best outcome for ALEX? His ability to lead both less-experienced newcomers and some of the biggest personalities in France makes him an undeniable asset for any team regardless of tier. A future in a Flashpoint team that cuts down on travel days significantly has also been mentioned, but it is clear that ALEX’s career is only just truly beginning.

Just a reminder because I’ve seen quite a few comments about me playing lots of Valorant : I never said I didn’t want to play anymore, just not travel as much.