Patrik: “Against Origen, I Was The Most Nervous I Have Ever Been This Split” 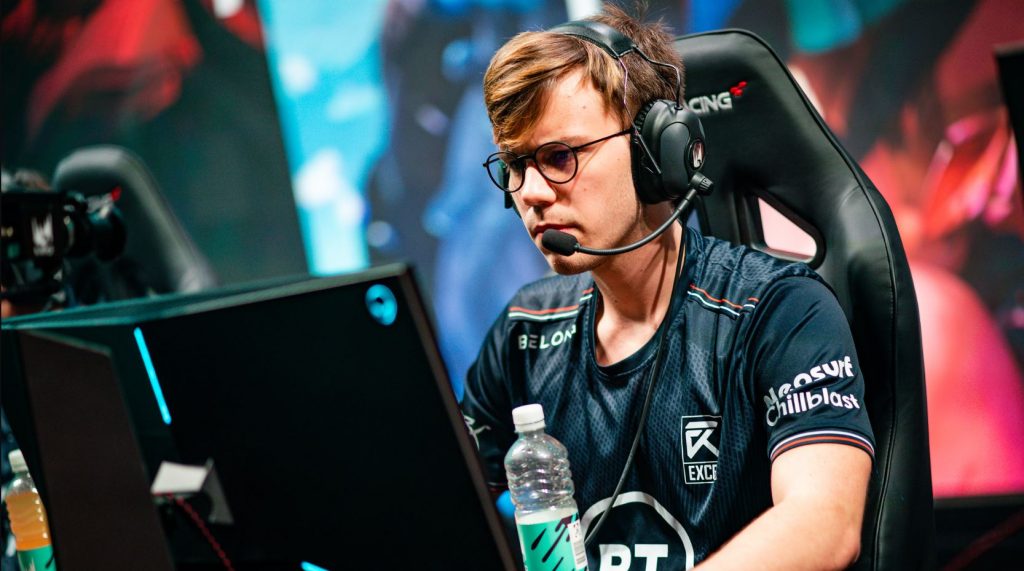 Patrik has carried most games for Excel Esports in this Split. (Photo courtesy Michal Konkol for Riot Games)

It’s starting to sound somewhat repetitive perhaps, but the LEC Summer Split is truly the closest it has ever been. Only two match days remain, ten matches in total, and every single team still has a chance to make it to the Playoff stage. As the pressure mounts and the stakes of each individual match keep rising, teams are doing everything in their power to let the odds play out in their favor.

Excel Esports took charge of their own fate on the first day of the ‘superweekend’ with a victory over direct Playoff spot rival Origen. With the victory, Excel’s chances of making it to the Playoff stage shot up to over 90%. After the victory, we spoke with Excel’s bot laner Patrik “Patrik” Jíru about the climax of the LEC Summer Split’s regular season. He shared how he prepared mentally and physically for the intense weekend, and he shared his takeaways from the victory over Origen.

Hotspawn: Before we talk about your game against Origen, I want to hear about the preparation of Excel this week. Walk me through the week, and how you prepare for a long, three-match weekend where everything will be decided for you.

Patrik: So, we knew that preparation was going to be difficult heading into the week. When you’re facing three opponents, it’s really hard to pin down one opponent you’re going to face. But our match against Origen was the most important one for our chances to make it to the Playoffs, so for most of the week we were focussing on them. We were going over what they were likely to do in the game, and what the best approach for us would be to counter it. Now that the match is over, we’re just going to get ready for Fnatic.

Hotspawn: When going over Origen in your preparation, what were the standout trends in their gameplay, or in their picks and bans, that you picked up on?

Patrik: Going against Origen, we mostly thought that, if we would get a lead in gold, then we would probably win. They’re not good with their comeback mechanics later in the game. They’re not good at trading sides, or making plays from behind in general. So it was our main plan to get the Rift Herald and use it to get ahead. If that wouldn’t work, we thought the game would be dependent on how we play team fights around drakes and Baron Nashor. That’s just how the game is, right now. We were mostly trying to see how they prepare for dragons and Barons, and we noticed that they don’t really stay together in one place. They move around a lot and they are not really coordinated. That was our biggest hope this game, I think.

It’s important to accept that you’re nervous, and try to be ok with that.

Hotspawn: How was your preparation reflected in the practice scrims you played this week?

Patrik: During the week, I think we tried to get drafts that are going to be as close as possible to the ones we’re going to have on the stage. For example, this week we had loads of Caitlyn first picks because that was just what we decided we would go with. It’s not like we were playing the scrims and constantly thinking of Origen, but we did try to play around the Rift Herald a lot and basically do what we think would help us win against Origen on stage. So that’s how that went for us.

Hotspawn: There was obviously a lot of pressure on this match specifically because, as you said earlier, this game against Origen was most important for your Playoffs chances. How did you mentally prepare for this, during the week?

Patrik: I think it’s rough. It’s very important to win right now. I’m just trying to keep calm, but going against Origen I was the most nervous I have ever been this Split. I didn’t have as good of a time. But I think it’s important to accept that you’re nervous, and try to be ok with that.

Hotspawn: Were your teammates also nervous?

Hotspawn: As a team, do you communicate with each other about things like nerves, or are you in a team that mostly keeps to themselves?

Patrik: We do have our sports psychologist, Fabian, right? The guys, and me as well, just talk to him whenever we’re feeling bad or something like that. Everyone just talks to Fabian. We usually try to figure out mental stuff in one-on-ones like this. It has been helping us a lot. It has helped me a lot, at least. 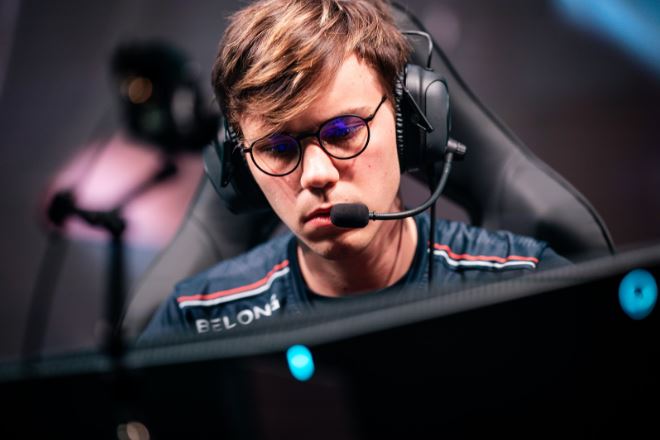 As the designated carry, Patrik felt a lot of pressure heading into this weekend. (Photo courtesy Michal Konkol for Riot Games)

Hotspawn: Do those talks reduce how nervous you are, or is it more about accepting the fact that you’re nervous?

Patrik: So, I think most players have doubts. I guess there are some players who are very confident in themselves, but I, as a player, sometimes have doubts about my performances and stuff like that. Coming into this week, I wasn’t really sure if I was ready for the matchups, if I completely knew how to play the game… stuff like that. Speaking to someone like Fabian, who is with us for everything, helps a lot. He says some positive things, you know? It’s very nice.

Hotspawn: Now, about the match against Origen. In the early game you were doing pretty well as a team. But when Origen shifted gears and played more aggressively, for a while it seemed like you were caught off guard. How was that for you?

Patrik: Well, I think the game was going fine or even good for us, but then we got Teleported on twice in the bot lane and… I don’t know what to say, really. We were in the game, we knew the TP was available, but we still just died to it. That’s on us, in the bot lane. From that moment on, we were kind of on the back foot. We were aware that the Teleport could happen, but we just didn’t respect it enough. That’s something to look into for our next games, especially against Fnatic.

Hotspawn: What was the turning point for you, in the game against Origen?

Patrik: Coming into the mid-game, with Baron Nashor spawning and stuff like that, I thought the game would be very hard. At that point, I was entirely behind. But then, during the game, I realized that Origen wasn’t really doing anything. I think they had multiple opportunities to take Baron Nashor, or even the second Nashor, and finish the game. I think the game was in their hands very much, but they just weren’t able to take it. We were just farming, trying to get good fights. Then someone made the call to go for a drake, which in that moment was a really good call. And from there on, we just won the game.

Hotspawn: A standout play to me was when Kryze dove onto Nukeduck at the Baron Nashor pit, which gave the opportunity for your team to just annihilate Origen. We haven’t really seen him step up this big before—how was it for you to see your teammate rise to the occasion?

Patrik: I’m just very glad. I had some good games and people were giving me a lot of praise. I’m just glad that, at least for now, Kryze was getting a lot of praise. He’s really good, right? I think in this game he played super well.

Hotspawn: Is it a relief for you that your teammates are showing they can step up? Until now, it has been no secret that you were the designated carry for the team. Your coach, YoungBuck, even told us so.

Patrik: It definitely takes away a lot of pressure for me. Maybe that was also one of the reasons why I was so nervous. I felt like I had to play very well to actually win the game with Excel. I would say I’m definitely relieved that I actually got carried a lot. I was completely useless in this game, so I’m just very happy that my teammates stepped up and won the game for us.

Hotspawn: Your next matches are against Fnatic and G2. Two teams that historically are titans, but have shown flaws in this Split. You’ve done most of your preparation, so what are you going to do now until those matches?

Patrik: Well, I’m going to eat some food now, I’m quite hungry. *laughs* I mean, usually before matches we have a presentation with what we want to do, and what our opponents are most likely going to do. We talk about the drafts and stuff like that. This evening, we’re going to talk about our draft a little bit and get ready for that. Then in the morning we’ll finish the preparation, watch the game that Fnatic played. Then we’ll get ready according to how that match went. Going against Fnatic, I think they have a very obvious playstyle. They just want to fist-fight everyone in the bottom lane, so we’re going to get ready for that.

Hotspawn: How do you rate your chances against Fnatic? They just, during this interview, got smashed by Schalke 04, by the way.

Patrik: Hm, I’m not too sure. There is probably a lot of pressure on them to perform. They’re Fnatic, you know? I think Fnatic is struggling a bit, mentally. Especially after losing to Schalke, right? There is no real pressure like that on us. We’re just Excel Esports, and we’re happy here. We’re winning, we’re doing really good as a team. I think we’ll win against Fnatic in seven out of ten cases. But we’re just going to try and do our best, like we’ve done all Split long.

Excel Esports plays against Fnatic next in the LEC Summer Split, at 7:00 p.m. CEST on Saturday, August 8th.