Pantheon Rework in the Upcoming LoL Patch 9.16: A First Look 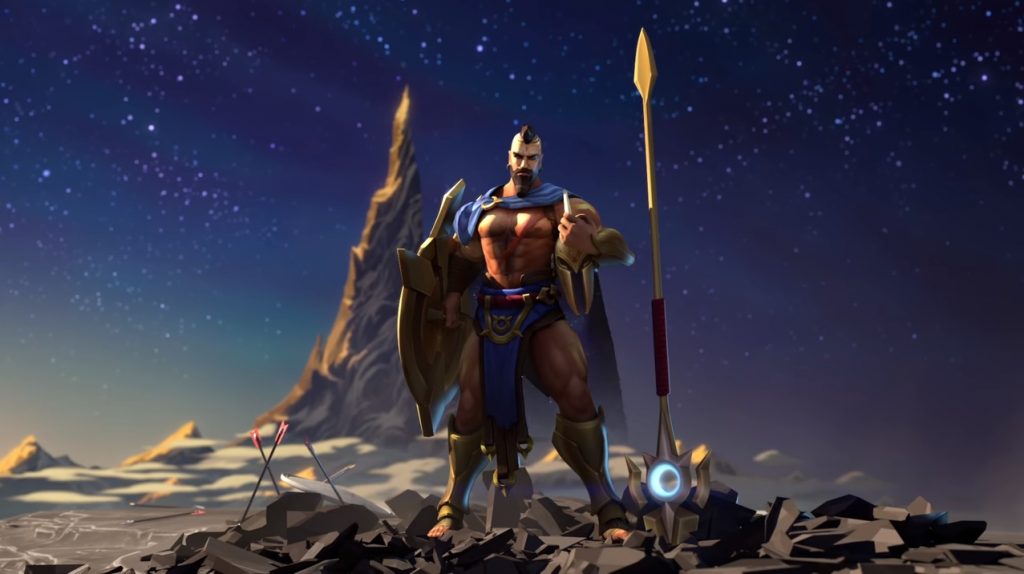 Pantheon, a hero in League of Legends, has been reworked by Riot Games. (Image via Riot Games)

Riot has unveiled an inside look into the upcoming Pantheon rework. The rework team identified a few key elements that they sought to preserve when it came to reimagining League’s iconic Spartan warrior. Among those are his teleporting ultimate, his strong all-in and his identity as an ancient Greek warrior surrogate.

Pantheon’s new appearance makes him look more similar to other Aspect champions in League (think Aurelion Sol and Taric) with a more cosmic style than the old Pantheon. Along with a new vanilla look comes a complete redux of all of his skins, all of which look incredible. Aside from his visuals, Pantheon also received a total VA overhaul, featuring a Northern Greek accent to pay homage to his Spartan-inspired roots. And, of course, his kit received some major changes. Every one of his abilities was retooled in some form or another, but longtime fans of the champion will still recognize most of his abilities.

Pantheon’s new Passive uses a stacking feature, similar to his old Aegis of Protection Passive. However, this iteration gives him access to empowered versions of each of his basic abilities. Every time Pantheon attacks or uses an ability, he gains one stack of his Passive. All stacks are expunged upon his next spell cast (except R).

His new Q is similar to his old, with a twist. This new Q is not a point-and-click ability like its predecessor. Rather, Pantheon’s new Q works very similarly to Pyke’s Q. He can tap the button to stab in a line or hold the button to throw the spear. The spear will travel through creeps but will do reduced damage. Thrown Q will also deal bonus damage to targets below 25% health. When empowered with Passive, Q does increased damage.

As far as similarities to old Pantheon go, W is likely the closest. He leaps to a target enemy and stuns them upon landing. New to this iteration, though, is the automatic attack that follows the stun. If empowered with his Passive, Pantheon will rapidly auto-attack the target 3 times after the stun. This addition makes for very good synergy with champions like Braum and Sejuani, who stack their passives via allied auto-attacks.

Pantheon’s old E was probably his clunkiest move, since it forced him to stand still and channel. Riot have blessed us, the Pantheon mains, by making him able to move during his new E! In the new version, Pantheon selects a direction and holds his shield there while stabbing with his spear over a 1.5 second period and at the end of the duration, he performs a shield bash for extra damage. During this time, he is invulnerable to ALL damage from that direction (including tower shots!). From my time playtesting, there are some interesting interactions that you may want to know: Pantheon can block Pyke R if he faces Pyke’s direction and keeps Pyke in front of him after the X has struck. He can also block damage from Brand’s Passive if he points his shield toward Brand. Similar to Braum, Pantheon can tank ultimates like Jinx’s or Draven’s with his new E. The empowered version deals bonus damage and increases the duration to 2.5 seconds.

Pantheon’s new R is similar to his old R in that it allows Pantheon to leap into the air, then land elsewhere dealing damage. However, instead of landing in a circular zone, he now selects an area and lands a bit before there, rolling like a stone to the endzone. He deals damage to all enemies along the way and automatically readies his Passive upon completing his R.

I’ve done some extensive playtesting on the PBE, and from what I can tell, Pantheon will be a great team fighter.

Taking the Conqueror keystone and building him in a bruiser style (something like a Jax or Riven) has garnered me some excellent results. That being said, fans of old Pantheon’s full lethality Electrocute build will be happy to know that items like Youmuu’s Ghostblade and Duskblade of Draktharr are still solid pickups depending on the match-up. He works best in the top lane or, if you’re like me, in the jungle. His ability to roam using his R and reliable crowd control with W to set up and execute ganks make him an excellent pick in the jungle.

That said, old Pantheon jungle players will have to adapt to clearing without the assistance of Aegis of Protection, but after a few games, his new clear will feel fine. It is also important to note that he is not quite the early-game monster he once was, though he is far from weak in the early game. If jungle, take care not to take extended skirmishes without Conqueror and keep in mind that his new E’s cooldown is over 20 seconds in the early game now, which means one misuse of E and the Spartan warlord could find himself in some trouble. Speaking of the early game, he can still execute solid tower dives early on, once again utilizing his E. Don’t be afraid to be aggressive and force opponents to burn precious cooldowns on your shield, then punish with a W and execute with Q.

New Pantheon is another win for the Riot Rework team, and long-time fans of our bread-baking Spartan warrior friend (like me!) will be pleased with the changes. He feels new and interesting, yet familiar to those who have dedicated time to him. His new abilities and offense-oriented Passive unlock a new level of versatility and flexibility to one of League of Legends’ oldest champions. Pantheon, The Unbreakable Spear, Grand Starfalls onto Summoner’s Rift alongside Patch 9.16.