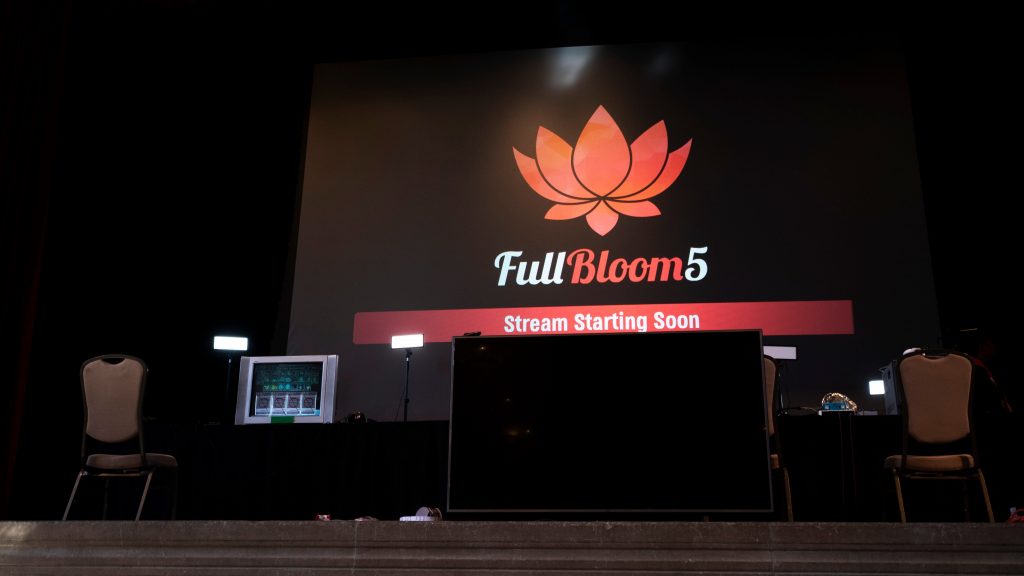 Full Bloom 5 had some great Smash Singles and Doubles action for both Melee and Ultimate. (Photo courtesy of @BTSsmash/Twitter)

Despite some hiccups with the stream and some delays (Melee Grand Finals didn’t start until after midnight), the event seems to have been an overall success. It was the biggest Full Bloom yet, and subsequently, there were a lot of lesser-known names to go with all the familiar faces, particularly with regards to Ultimate.

Despite the outcome, SFAT gave Zain a run for his money in the Grand Finals, but just couldn’t pull it together in the end. The top three here is a funny triangle—Zain double-eliminated SFAT, who double-eliminated Johnny “S2J” Kim, who can beat Zain while SFAT has yet to take a set off of Zain.

You can see the top placements, along with their payouts, below:

To no one’s surprise, Kevin “PewPewU” Toy and SFAT, the dynamic duo widely known as PewFat, took the top spot for Melee Doubles. Their biggest contenders, however, were certainly unexpected. After winning a tight game five in the Winners Semi-Finals, Cody “iBDW” Schwab and Kristian “Rocky” Cruz managed to clutch it out and send PewFat to losers.

PewFat proved undaunted despite the upset as they swept through Losers Quarterfinals, Semi-Finals and Finals, racking up a series of 3-0s against Evan “Fizz” Akhavan and Theodore “Bladewise” Sybold, Joey “Lucky” Aldama and Kyle “Kalamazhu” Zhu, and Zain and Swedish Delight. PewFat dominated iBDW and Rocky once they met again in the Grand Finals, with first a 3-0 and then a 3-1 win in the bracket reset.

Thank you for making Full Bloom 5 a blast! Until next time… #FB5 🌸🌸🌸 pic.twitter.com/ulNbaYZY8b

Cosmos, also sponsored by Panda Global, clutched it out of Losers after game fives against Eric “ESAM” Lew and Maister but, ultimately, he found himself double-eliminated by Marss in grands. Maister, ranked 81st on the Smash 4 Top 100 of all-time, kind of came out of nowhere to show everyone what Game and Watch can really do. He knocked both Jestise “MVD” Negron and ESAM into the Losers bracket but found himself double-eliminated by Cosmos after Losers Finals.

Marss’ and Cosmos’ Singles prowess translated to Doubles, where they didn’t drop a single set. In fact, the only game they lost was to the Smash 4 gods MVD and ESAM in Grand Finals.

Cosmos, Marss, MVD and ESAM are all very familiar names coming from the Smash 4 scene, so it’s nice to see so many new names show up in the higher placings—players like yeti and Gemini, Maister and Nuhuh, AceStarThe3rd and Shin, and BugBoi and JNap clearly have potential.

It’s fun seeing the meta grow and change for Ultimate. For example, who would have expected Game and Watch to do well against some of the world’s top players until they saw Maister putting on a show? The next Ultimate major and first Ultimate saga, 2GG: Prime Saga, will be April 13-14—what surprises are in store for us then?

Although Melee is much more predictable thanks to its age, the meta is not set in stone. Players like SFAT make it clear that there is still room for improvement, and that with hard work and diligence, players who might seem stagnant can make explosive runs. Melee’s next major is Pound 2019, which is hosting tournaments for both Melee and Ultimate. It’s a little less than a month away, on April 19-21, after a three-year hiatus.