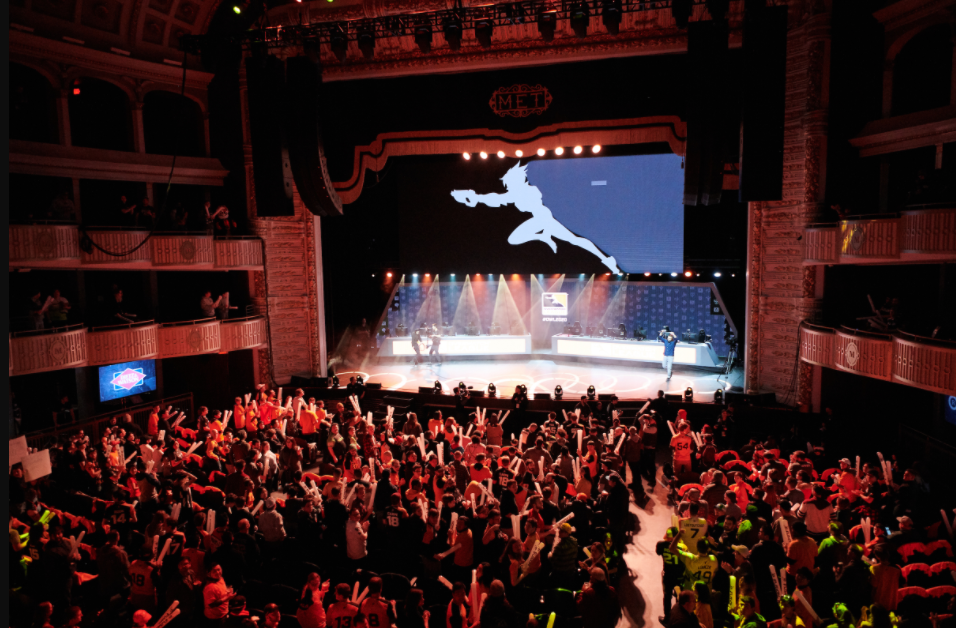 Role Stars will honor 12 of the league’s top performers during the 2020 season. (Photo Courtesy Ben Pursell for Blizzard Entertainment)

The defining skill of the OWL in 2020 has been the ability to adapt to a changing landscape. After prepping for a season designed around global travel, teams had to adopt a more domestic existence with online play. Hero Pools scrapped the existing paradigm of meta refinement and replaced it with a system that values flexibility above all. Never before has it been harder for teams and individuals to perform consistently over time.

And yet, even as the season and life in general was upended, a special few managed to thrive in the chaos. If the league’s Role Stars are meant to reflect the state of the league in a given year, then consistency must be among the chief qualifications. The 12 winners should have all performed well across multiple metas while having individual showings that elevate their teams. With that in mind, let’s get to Hotspawn’s 2020 Role Stars.

When you’re talking about consistency, there isn’t a better place to start in Overwatch than with Choihyobin. As remarkable as it is to say, the reigning Grand Finals MVP might have turned in an even better season after a breakout 2019. 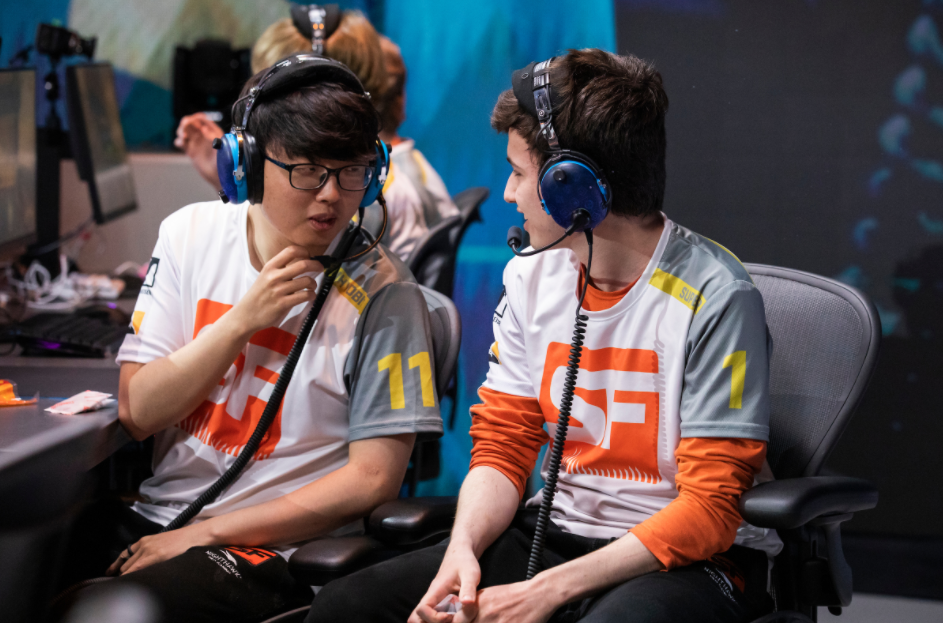 In a year that saw flex tanks forced to play more than D.Va for the first extended period in league history, Choihyobin proved that he’s top-tier on anything required of him. His Sigma play was sublime both individually and in setting up the rest of the Shock to dominate. Few things were scarier in 2020 than Choihyobin and Seon-chang “ANS” Lee taking an off-angle and pumping damage into your team.

At season’s start, it would have been a leap of faith to predict Hanbin in this position, not for any lack of talent on the part of the Paris tank, but rather for the skepticism around the Eternal’s ability to meld European and Korean talent and survive without their marquee star for half the season.

Paris weathered the storm until Yeonghan “SP9RK1E” Kim came of age, then exploded into the league’s top tier. At the center of both of those efforts was Hanbin. He was the rock of this Paris team through multiple midseason retirements, new faces, and an ever-changing meta. Among Sigmas with 100 minutes or more, he led the league in Damage, Eliminations, and Final Blows per 10 minutes. More than any other player, he pushed Paris to their place among the league’s best.

At times, it’s easy for Void to get lost in the shuffle on Shanghai. When there’s otherworldly talent at basically every position, Void’s steady presence blends into the larger scene like the score of a great movie, subtle but no less vital for it.

He’s earned himself an MVP nomination on the back of his work across every meta this year. Shanghai has been among the elite teams all year in large part due to their ability to shift seamlessly between metas. Void is critical in that regard due to his ability to pick up any flex tank and deliver. Two tournament titles and the league’s best record is icing on top of Void’s airtight case.

The only main tank on this list earns his spot courtesy of his unrivaled flexibility at the position. Where other main tanks thrive on one or two of Reinhardt, Winston, and Orisa, SADO is top-tier on each and every one. Maybe he’s not the absolute best at any given hero, but SADO’s ability to switch on the fly means Philly never has to telegraph their strategies and can easily audible to different looks. 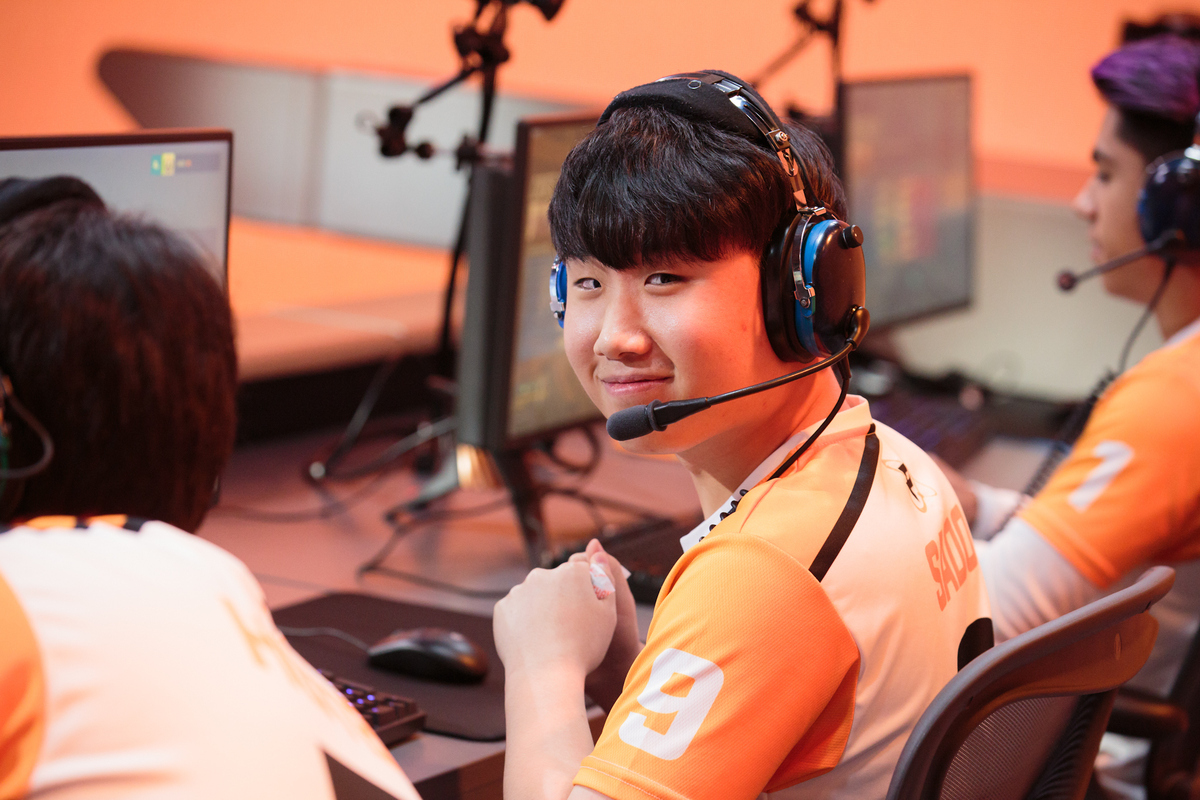 After spending a year on the receiving end of a lot of criticism in 2019, SADO has rewarded the Fusion for their unwavering trust in his abilities. He had a ton on his shoulders as the only main tank in Philly, but SADO delivered an unwavering performance under pressure this season.

If SADO was burdened by critique entering the year, his Fusion teammate was carrying the weight of expectation. Alarm was an Overwatch wunderkind who spent two years being touted as the next great thing. And then he was! Alarm stepped on the stage on Day 1 and was everything he was said to be.

Not only has Alarm been superb this year, but he’s also done it on nearly the entire support lineup. He’s spent at least 15% of his time on Ana, Baptiste, Brigitte, Moira, and Zenyatta while putting up crazy stats on every one. He’s in the top five of basically every major statistic on all of those heroes. The only thing he doesn’t play is Lúcio, and at this point I’m convinced he would be elite there as well if Fusion ever asked him to play it.

The first Western player on this list, FunnyAstro has been a perfect compliment to Alarm in the Fusion backline. Where Alarm is the superstar fragger, FunnyAstro is the one putting in the dirty work. He tops the league in Healing per 10 minutes on both Lúcio and Brigitte, enabling his teammates to pop off around him.

FunnyAstro isn’t necessarily the insane playmaker – though he does lead the league in Damage per 10 on Lúcio – but he brings stability to any situation. It’s incredibly rare to find him out of position, and he dies less than any other top support in the league. The only knock on him is some struggles picking up Baptiste, but Philly’s depth made that a non-issue.

Another rookie with sky-high expectations to start the season, LeeJaegon hasn’t always made it look as easy as Alarm, but his results don’t lie. Despite spending just a quarter of the time on his signature Lúcio, LJG has been a core piece in Shanghai’s success all year long.

He’s done it primarily by developing into one of the best Brigitte players in the league. He’s had to curtail the all-out aggression that defined his Lúcio, but he still manages to make impact plays constantly. When LeeJaegon does get to play everyone’s favorite DJ, he goes crazy, leading the league in Final Blows and Eliminations per 10 minutes by a significant margin.

Viol2t is a flex support who truly embodies the position, taking on a constantly rotating assignment in 2020. He’s excelled on everything, but he’s made his biggest impact on Baptiste, where he puts his tremendous mechanical prowess to good use. On the hero, he leads the league in Final Blows per 10 minutes and second only to Alarm in Damage and Eliminations per 10. 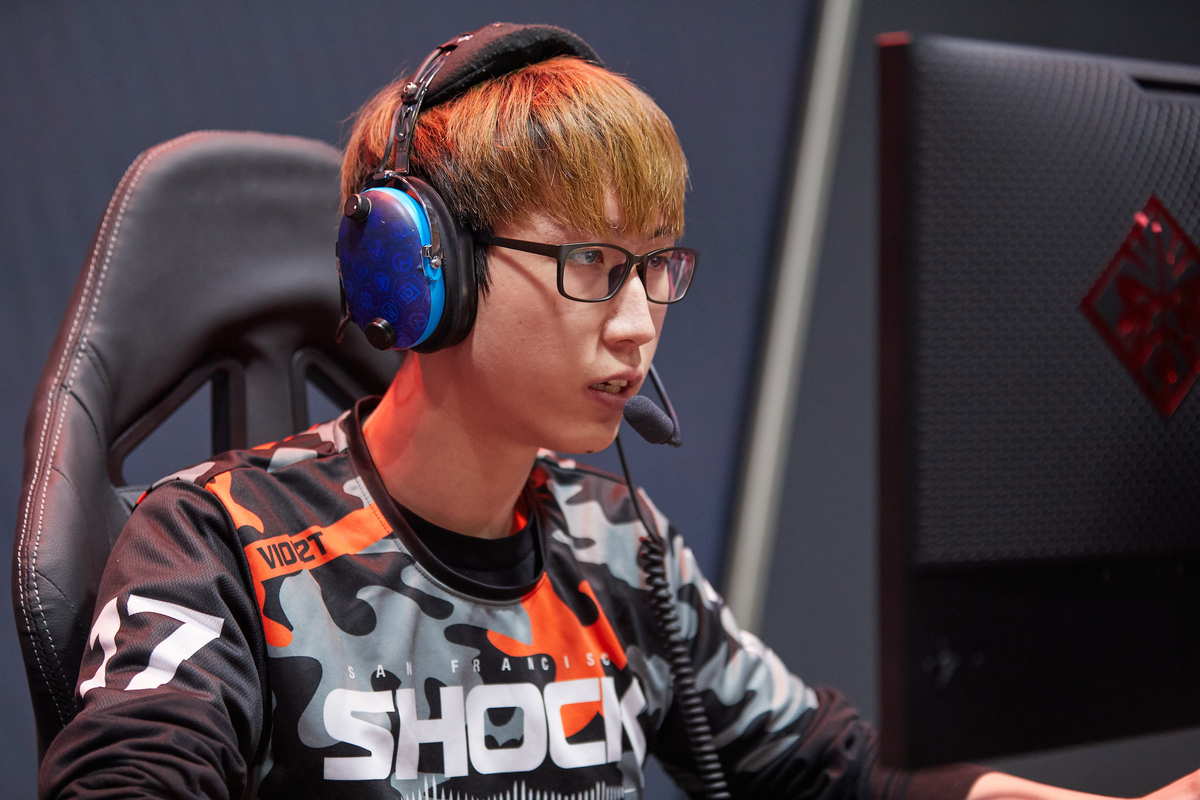 Despite sharing time with Juseok “Twilight” Lee at times, Viol2t has still managed to shine in 2020. His Zenyatta might be the best in the league, especially in double shield looks where he can act as a turret in the back line. Take him away and the Shock aren’t nearly the same juggernaut, even with the talent they have to replace him.

More than any other role this year, damage players were tested on their ability to perform on a variety of picks. With Hero Pools consistently removing two top DPS picks from play, teams had to either rely on depth or a single hyperflex player who could play what was needed week to week. For the Shanghai Dragons, Fleta was that player.

Fleta played 16 different heroes on the season, 6 of them with at least an hour of play time. When called on, he took the thankless job of playing Mei, Torbjorn, and Reaper, putting in the quiet work needed for Shanghai to thrive. At other times, he was the carry for the Dragons, putting in monster performances on Genji, Tracer, and Echo. That versatility was a huge asset for Shanghai and will continue to serve them well in playoffs.

Sometimes, the meta dictates the personnel a team fields. A starter maybe can’t handle a certain niche hero or you want to bring a specialist off the bench. Other times, though, your personnel dictates the meta that you play. If a player is good enough on a certain hero, they can force it even if it’s not necessarily the “correct” choice.

This year, that was LIP and his incredible Sombra. Over the course of 2020, Sombra had her place in the meta, especially in Asia, but didn’t dominate, earning a 22% play rate on the season. For his part, LIP picked her just over half the time, more than double the league average.

For the Dragons, his Sombra was a driving force for their success, especially in dive comps. LIP was spectacular all year long, pushing the limits of the hero. He led the league in Damage per 10 and turned Sombra from a liability whenever EMP was down to just another avenue for Shanghai to set up their aggressive dives. Add in some stellar showings on hitscan heroes as well, and LIP is a strong Rookie of the Year candidate.

MVP candidate, clutch king, hitscan god, what more needs to be said about carpe. Through three seasons, he’s been the epitome of a superstar in the Overwatch League. Nothing – aside from 2019’s GOATs meta – seems to faze this guy in the slightest. 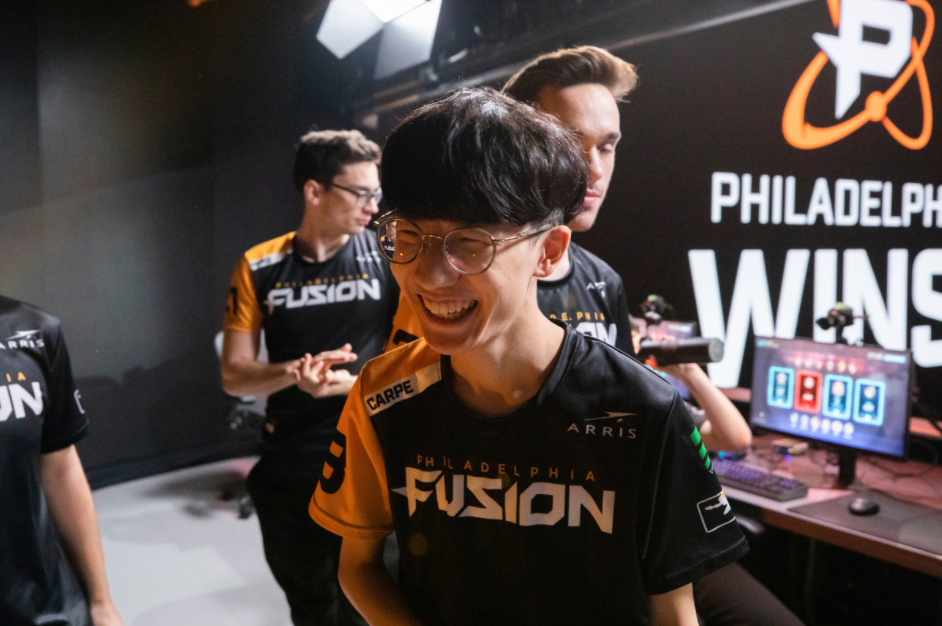 Surprisingly, carpe’s per 10 minute stats really won’t blow you away. On his most played heroes, the only place he tops the charts is in Eliminations/10 on Ashe. Where carpe separates himself from the competition is his performance in opening and closing teamfights.

He’s third in the league in First Elimination rate on both Ashe and Widowmaker, displaying a knack for finding crucial picks. When it comes to closing out fights, he’s third in Final Blows per 10 in situations where the Fusion are even or down in numbers. His ability to clutch up in the decisive moments has lifted Philly up this year and should strike fear into their opponents come playoff time.

2020 has seen an incredible crop of rookies enter the league and compete at the highest level from the jump. One that has been overlooked at times has been KSP, the hitscan who lead the Valiant to a top-5 finish in NA and the playoff bye that comes with it. He doesn’t necessarily have the name recognition of your typical Role Star, but KSP has earned his place here.

Going into the season, Ashe had been an afterthought for her entire existence in Overwatch. After a couple buffs and teams realizing her potential, she became the second most played DPS on the year. In that time, it’s hard to argue that anyone was better than KSP on the pick. Among players with a 150 minutes or more on Ashe, KSP was top-3 in Damage, Eliminations, Finals Blows, and Solo Kills per 10 minutes. The Valiant were on the forefront of the Ashe wave throughout the season, and it’s easy to see why with a talent like KSP.