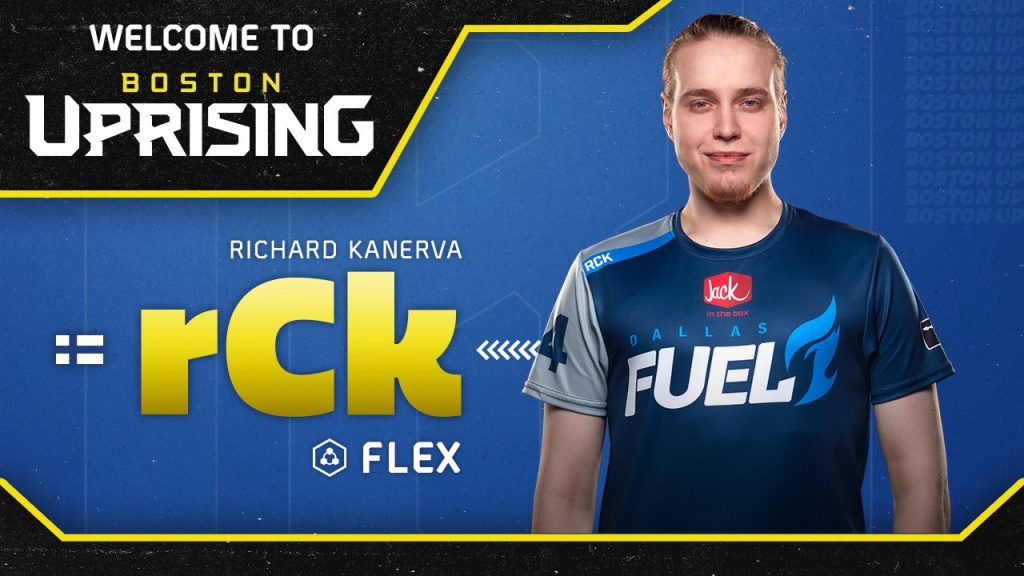 Days before Stage 2 begins, OWL teams are announcing player trades and pick-ups. We'll keep you up to date as the roster news breaks.

With the start of Overwatch League’s Stage Two only days away, teams are finally announcing roster changes. OWL teams have only two days before the start of the next Stage.

We’re tracking all the changes for you here:

First up was the Boston Uprising. They announced the signing of Zion”Persia” Yang, a 20-year-old support player. Persia played in the Overwatch Contenders League: Pacific for Talon Esports.

Known for his Zenyatta play, Persia will be the fourth support player on the Uprising.

Then, the squad announced that they are swapping flex players with the Dallas Fuel, trading Lucas “NotE” Meissner to the Fuel in exchange for Richard “rCk” Kanerva. NotE started each match this season with the Uprising, leaving a significant spot for rCk to fill. The latter is known for both off-tank and flex tank play. He had previously competed for Team Gigantti in the Overwatch Contenders League: Europe.

Chris “HuK” Loranger, President of Gaming for the Kraft Group (the organization that owns and operates the Boston Uprising), thanked NotE for his contributions to the team. He also welcomed both Persia and rCk to the squad, expressing a belief that both players will be key participants for the team moving forward.

Every kingdom needs a king and today marks the beginning of a new reign, welcome @KING_BABYBAY to your Atlanta Reign – ESKETITTT! #LetItReign pic.twitter.com/1rAgFWCRtJ

The Shock were heavy for DPS players on their roster, while the Reign only had two moving into Stage 2 prior to this move. Within the OWL, the Reign currently sit in the fifth position, one spot ahead of the Shock.

Aside from trading rCK for NotE, the Fuel also announced that Christian “cocco” Jonsson will be leaving the team. Cocco had played the main tank role for the Fuel during the Inaugural Season of the Overwatch League and then transitioned to a coaching position for the first stage of the Second Season.

Thank you @cocco. For everything.

You’ll always be a welcome member of our family and we know you’ll be great in whatever you pursue next.#BurnBlue pic.twitter.com/ii8iehwSUu

Toronto Defiant’s Do-hyung “Stellar” Lee decided to retire from competitive play due to personal reasons. Stellar spent the first stage as the Defiant’s main Brigette player, despite being more widely known for his Tracer skills before the GOATS meta.

Today we announce the retirement of Do-hyung "Stellar" Lee.

Thank you @dohyung6130 for what you brought to this team. We wish you the best of luck in the next chapter of your story.#ThankYouStellar #RiseTogether pic.twitter.com/hLJ417si2Q

The Defiant also saw fit to add a player: Jin “im37” Hong. Im37 formerly played DPS for Second Wind, a North American Contenders team – but only for eight days. As the Toronto Defiant announcement put it, he’s been “speed-running his way into your hearts and the Path to Pro”.

We’ll continue to update this article as roster announcements occur leading up to the start of Stage 2 on April 4 at 7:00 p.m. EDT.

Let us know on social media which teams you think have made the smartest roster moves.