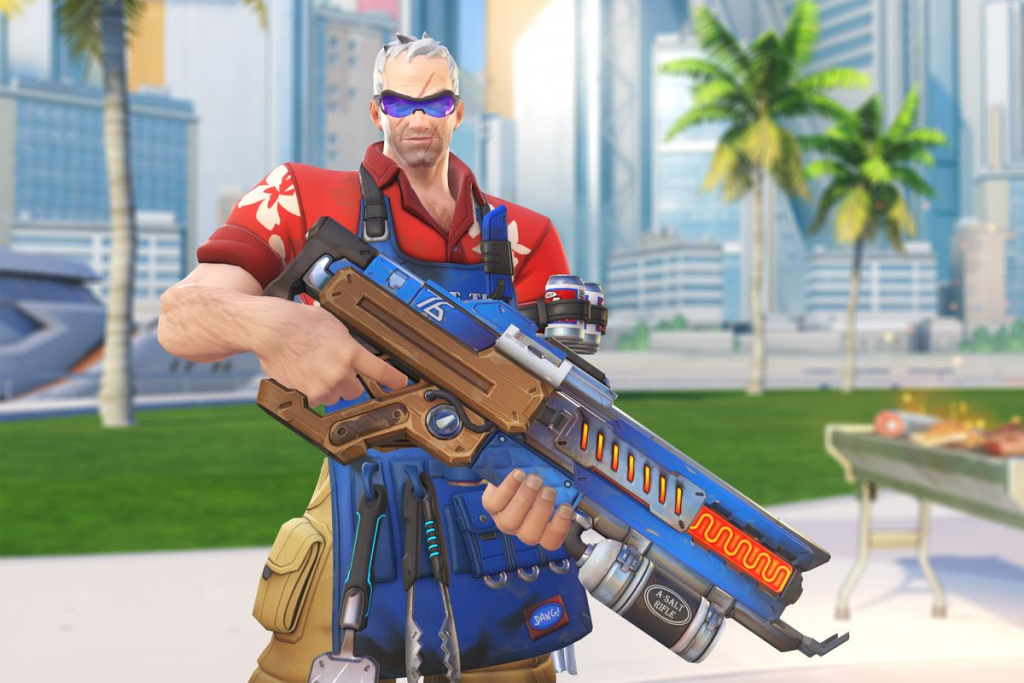 The Overwatch League is back and qualifiers for the Summer Showdown tournament are underway. (Photo courtesy Blizzard)

After a three week hiatus, Overwatch League returned on Saturday. Week 19 was the first of three weekends of qualification matches, which will be used to determine the seeds for the upcoming Summer Showdown. The Summer Showcase is scheduled to begin on July 3rd in North America and July 4th in Asia.

The Summer Showdown’s schedule and rules are very similar to those of the May Melee which took place throughout the month of May. The league will host three weeks of qualification matches followed by two regional tournaments, one in Asia and the other in North America. The seeding for the tournaments is determined not only by wins, but also by the map differential.

There were eight matches hosted in week 19, with two matches taking place in the Asian Pacific region and six in the North American region. The Hero Pool for week 19 and 20 rotated out D.Va, Echo, Sombra, and Briggitte. While on hiatus, the Overwatch League announced some changes to the format of the hero pools. Going forward, Hero Pools rotations will apply for two weeks at a time, after which Hero Pools will be turned off entirely for two weeks. This new cycle will see fewer hero rotations, but still keep them for some regular season matches.

Shanghai started off their Summer Showdown qualifications with a bang, taking the London Spitfire down in a 3-0 series.

Throughout the match the Dragons relied on a diverse array of DPS hero picks which kept the Spitfire on their backfoot. At various points in the series, the Dragons played Reaper, Mei, Genji, Ashe, Widowmaker, Tracer, Pharah, and more. The Dragons’ flexibility in the DPS role helps them effectively adapt to a plethora of enemy compositions, helping them maintain the upper hand.

Shanghai won the APAC May Melee and are the clear favorites to win the upcoming Summer Showdown in the APAC division. However, despite their dominant success in Asia throughout OWL Season 3, the Dragons only managed to secure the #2 seed in the May Melee tournament. The Guangzhou Charge ended up taking #1 and the bye into semi-finals. With today’s victory, Shanghai set their sights on taking the #1 seed this time around.

After a devastating 0-3 loss to the Shanghai Dragons in the May Melee semi-final round, the NYXL entered Saturday’s match determined to prove they are a top tier team in Asia. They ended up securing the series against the Seoul Dynasty in a convincing 3-0 sweep.

Although New York has been playing in the APAC division since week 12, Saturday’s match was the first time the Dynasty and the Excelsior have played this season. Judging by that match alone, it seems clear that the NYXL are the superior team in terms of both discipline and execution.

The NYXL victory over the Dynasty was made more significant by the fact that the Dynasty came in second in the May Melee, only losing the Grand Finals to the Dragons in a very close 3-4 series. If NYXL can soundly defeat a team like the Dynasty, they likely have a real shot at winning the APAC Summer Showdown.

The NYXL also debuted their newest player on Saturday, former Titan’s DPS player and the 2019 OWL rookie of the year, Hyojong “Haksal” Kim. Throughout the series, Haksal played his iconic main Genji, as well as Reaper. Although he is still new to the lineup, Haksal is already showing himself to be a fantastic addition to the already star studded NYXL squad.

The Defiant and Titans last met a few weeks ago in the May Melee play-in match, which also ended in a Defiant Victory. In Saturday’s rematch, the Defiant’s superior experience in the Overwatch League gave them a clear advantage over the Titan’s less experienced squad. Throughout the match the Titan’s were outmaneuvered by the veteran DPS and Tank core of the Defiant, allowing the Defiant to easily take the win.

The Titans have struggled to find success ever since they debuted a new roster back in week 14, after releasing their entire coaching and player staff earlier in 2020. Much of the new Titan lineup came from the Contenders team Second Wind, and none of the new Titan’s players have previously played in the Overwatch League. Thus far, their inexperience has been their undoing. The young Titans team have not yet won an OWL match.

The Defiant debuted their new main tank Seb “numlocked” Barton on Saturday. He primarily played Orisa and looked very strong throughout the match. In a post game interview, Toronto Off-Tank player Andreas “Nevix” Karlsson praised Numlocked for his strong communication and leadership ability. We will have to wait and see how Numlocked performs against stronger teams, but for now it appears he is a good addition to the team.

The L.A. Gladiators started their Summer Showdown qualification strong, defeating the Atlanta Reign in a 3-1 series. The biggest difference maker for the Gladiators was Ji-hyeok “birdring” Kim, who dominated the Widow duels with Andrej “babybay” Francisty throughout the series, giving L.A. the edge in numerous teamfights. Birdring won the player of the match for his impact plays.

Both the L.A. Gladiators and the Atlanta Reign entered the Summer Showdown qualifiers with something to prove, following their early exits from the May Melee tournament a few weeks ago. Although both of these teams entered Season 3 looking like top tier contenders, they both lost in May Melee quarterfinals; not an ideal outcome for a top tier team. Throughout Season 3, the Reign and the Gladiators have both struggled to live up to the high expectations that were placed on them at the start of the season. Luckily, there is still time for the organizations to turn things around.

The victory over the Fuel continued the momentum which Florida built during their unexpected run to the Grand Finals in the May Melee tournament. Throughout the month of May, Florida won several key games to secure the #2 slot in the North American May Melee tournament. Despite their successes, many analysts continued to write them off as irrelevant, since some of the teams they played against weren’t very highly rated. However, Florida proved the doubters wrong by advancing all the way to Finals where they eventually lost to the San Francisco Shock.

As we enter the second half of Season 3, Florida is one of the more interesting teams to keep an eye on. They went from being considered a flop at the start of the season, to holding a #5 ranking in the overall season standings and nearly winning the NA May Melee championship. Whether or not their meteoric rise is here to stay remains to be seen, but either way it will be an entertaining ride.

Philadelphia Fusion continued to play consistent, creative Overwatch on Sunday, defeating the Houston Outlaws 3-0. The victory came as no surprise to anyone following the Overwatch League, since the Fusion are #2 in the OWL standings, while the Outlaws are ranked #14.

The Fusion had a disappointing May Melee. Many Fusion fans were hopeful that their team would have a shot to win the NA regional tournament, however the Mayhem defeated the Fusion in semi-finals, taking the upset victory 3-1. This loss was a big missed opportunity for Philadelphia to show that they are capable of winning championships.

The Fusion have had a fantastic year on paper, however they still haven’t proven that they can win on the big stage against the best teams like the SF Shock. Going into the Summer Showdown, the Fusion have a chip on their shoulder and are looking to show the world why they deserve to be the top ranked team in North America.

The L.A. Valiant defeated the Washington Justice 3-0 on Sunday. The Valiant qualified in the fourth position for the May Melee, which secured them a first round bye. The Valiant are looking to repeat their excellent May Melee qualifier performance in the Summer Showdown qualifiers.

The Valiant started off the season with a mixed record, playing primarily against the L.A. Gladiators and the SF Shock. Since branching out and playing against teams all around North America, it has become increasingly clear that the Valiant is one of the best teams currently playing in the NA region. Led by top tier DPS players Kai “KSP” Collins and Johannes “Shax” Nielsen, the Valiant are capable of hanging with almost any team in the league. They are a team on the rise and are one of the teams to keep an eye on in the second half of the season.

In the North American region, one key match to watch will be the Florida Mayhem against the L.A. Valiant. The match is set to begin at 2:00 p.m. PDT, and will be the first time the Mayhem and the Valiant have played against each other in Season 3. Both teams are currently on hot streaks, so that match is sure to be entertaining and explosive.

In the APAC region, the Guangzhou Charge will be looking to take revenge against the Seoul Dynasty in a rematch on Saturday at 1:00 a.m. PDT. The Dynasty eliminated the Charge in a very close 3-2 semi-final match during the May Melee. Next week they will fight it out again, competing for both pride and qualification points.