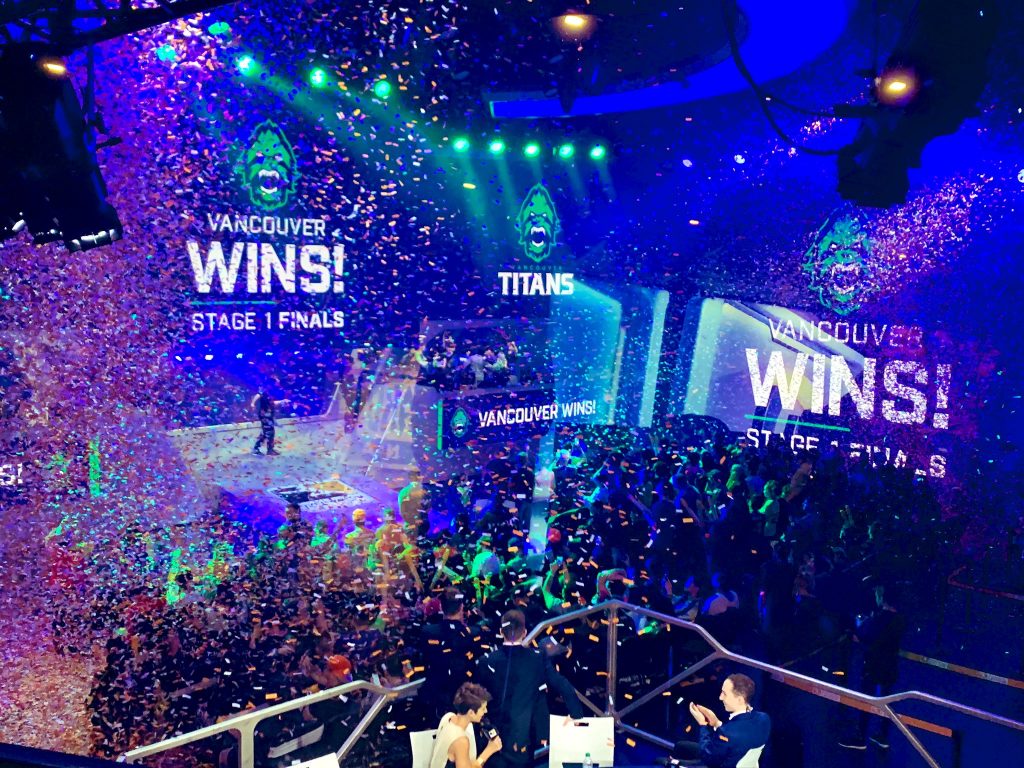 The Vancouver Titans are the first Stage champions in OWL's second season. (Photo courtesy of @VancouverTitans/Twitter)

With some of the best displays of Overwatch League play, and a fitting goodbye to the GOATS meta, the Overwatch League has crowned the Vancouver Titans the Stage One Champions. The Grand Finals was a great display of mechanical skill, mental fortitude and strategic execution that had fans all around the world on the edge of their seat.

In a thrilling seven-map series, the Vancouver Titans beat the San Francisco Shock 4-3. The Titans secured themselves the title of Stage One champions and $200,000 USD.

The Shock earned themselves a well-deserved $100,000 and both the Seoul Dynasty and Philadelphia Fusion walked away with a respectable 3rd/4th place and $50,000.

Sweet, sweet victory for the @VancouverTitans!

THEY ARE THE #OWL2019 STAGE 1 CHAMPIONS! pic.twitter.com/oABtfmcabb

Vancouver Titans to the Limit

Vancouver’s victory pushed the Titans to the limit as the Shock pushed back stronger than any other team had throughout Stage One. San Francisco was prepared for the Titans’ strategy and knew that if they had any chance of winning, they would have to break the back lines of the Titans and eliminate the Titan’s star tank Park “Bumper” Sang-Beoms. It was an incredible display of tank versus tank when Bumper and Matthew “Super” Delisi relentlessly targeted one another. The balance of victory was held in the hands of these two tanks and each team knew that they could only truly obtain or defend an objective if these players were removed from the equation. If the Shock won, you knew the Bumper was being mercilessly targeted by the Shock and you knew that if the Titans won, Super was the target of the Titans.

There were some truly outstanding moments throughout the seven maps, executed by both teams. One of the best displays of raw talent came on the Temple of Anubis where the Shock were inches away from moving the payload to Point A; the Titans were holding strong.  But, without warning and with perfect placement, Choi “ChoiHyoBin” Hyo-Bin had an amazing Self-Destruct with D.Va, removing three Titans instantly and securing them Point A and Point B. D.Va ultimates were part of the reason the Shock were able to hold the Titans back. It made D.Va mains around the world yearn to jump into a game and flex their skills like ChoiHyoBin.

What was truly incredible about this matchup is that the Shock and the Titans never gave up and pushed the series to overtime in map seven.

Everything Came Down to Rialto

The last map was Rialto, and the Shock were up first. Watching them complete the map looked easy for the Shock, with a few moments where things looked heated, but an overall successful completion of the map. This was mostly due to Super’s career-defining plays and Jay “Sinatraa” Won’s plays as Zarya.

Sinatraa is hands-down the best Zarya in the League and his demonstration of skills on Rialto will be coaching material for years to come. With a minute left on the clock, Shock closed their push, and it was the Titan’s turn at bat. And if Shock had looked prime to win the Championships, the Titans told the League to hold my beer and completed Rialto in the fastest time recorded in the entirety of the OWL.

This meant map seven was tied 3-3.

When both teams moved into overtime, Shock had a minute to successfully move the payload to Point A, but the Titans had other plans. They denied the Shock the ability to complete the move, and then the Titans went on offense.

With over four minutes on the clock, thanks to the Titans record-breaking completion of Rialto, they knew they could methodically and calmly take Point A to secure their win. The Titans’ first push saw the payload move within meters of Point A, but the Shock was able to hold them in place, stabilize and attempt to move the payload back. Their attempt to push back the Titans was honorable. but the Titans overcame the Shock and pushed the payload to Point A with minutes left on the clock.

With an incredible Stage One Grand Finals finished, teams now look to April 4 to prove themselves worthy of making it into the Stage Two Playoffs. Will the Vancouver Titans be able to continue their win streak into Stage Two? Will the the Seoul Dynasty be able to take revenge on the Titans? Be sure to head over to Twitch to watch Stage Two kick off on April 4!