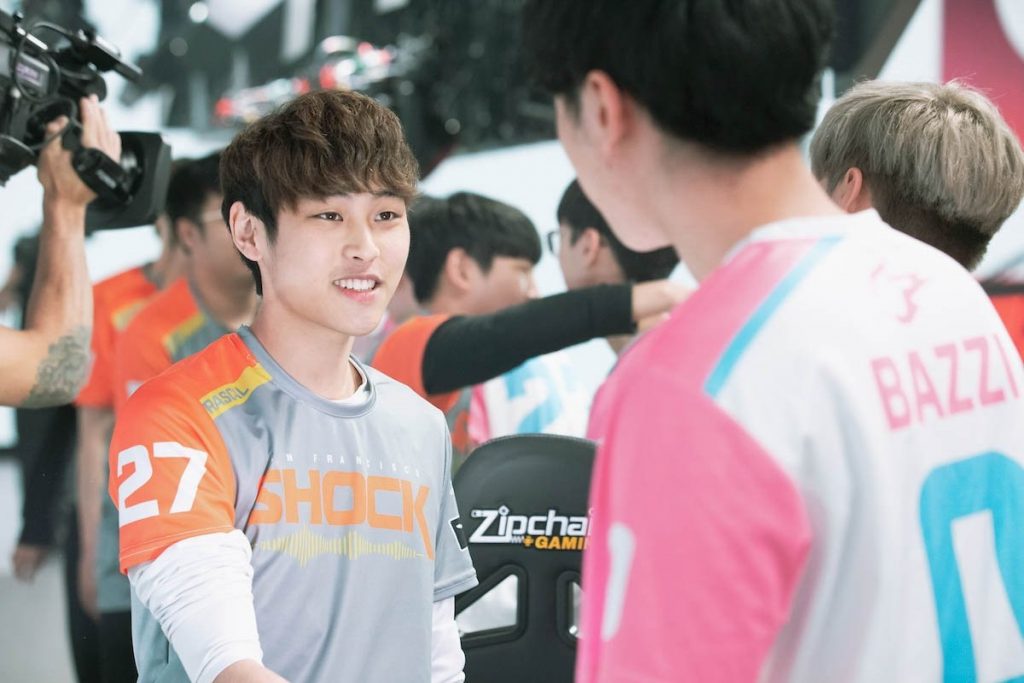 The first map was Busan, where the teams ran a mirror match of Sigma/Orisa, Lucio/Moira, and Reaper/Doomfist. Hangzhou were strong on Point 1, where they found success by reaching 100% capture progress before the Shock could muster even 50%. However, their luck would change going into Points 2 and 3. The Shock’s Minki “Viol2t” Park’s Moira play would come in clutch and provide some fight-winning Coalescences on more than one occasion, allowing star DPS player Jay “Sinatraa” Won to dive in and out of the Spark’s back line on his always stellar Doomfist. The Shock would end up reverse sweeping the map for a 1-0 series lead.

Up next was King’s Row, where the comps remained mostly unchanged. The narrow corridors and ample walls allow for the classic Reaper/Doomfist duo to wreak havoc, which both the Spark and the Shock put on display throughout. Both teams completed the map, but only the Shock were able to recap the first point in the overtime round, putting San Francisco in a commanding 2-0 lead going into the third map.

Temple of Anubis was a similar story to King’s Row, but the scoreline reflected double overtime this time around. Both teams completed Temple of Anubis not once, but twice each! San Francisco’s Myeong Hwan “Smurf” Yoo’s Orisa played a crucial role in holding the line and creating space for Sinatraa’s Doomfist to pick apart the Spark’s offense. San Francisco’s synergies, particularly utilizing Orisa’s Halt! ability combined with Reaper’s Death Blossom or Doomfist’s Meteor Strike proved too much for Hangzhou to handle. The Shock eventually won the war of attrition 5-4, putting the Shock at match point.

Dorado was be the site of the Spark’s last stand, and they fought tooth-and-nail to preserve their Grand Finals dreams. Hangzhou employed the services of Junki “Bazzi” Park’s Bastion and Kyeong Bo “Godsb” Kim’s Pharah to complete the map, but, unfortunately, the Shock had matched them with a full completion as well. Once again forced into overtime, the Bastion/Pharah duo was again used to capture Point 1 before being stopped about halfway to Point 2. For what would be their final attack, the Shock elected to run Mei/Bastion with a Baptiste to help prop up the Bastion on the payload. Fortunately for Shock fans, the nearly impossible to displace Bastion/Baptiste/Mei trio made smooth sailing of the final push, and San Francisco cruised to a clean 4-0 sweep of the Hangzhou Spark.

For his exceptional support play, San Francisco’s Viol2t received player of the series honors, with an incredible 97,119 healing done on Moira in just four maps. The Shock are now just one game away from a Grand Finals berth, with only the New York Excelsior standing in their way. The Shock take on the NYXL today, September 15, at 3:00 p.m. EDT on Twitch, Disney XD, and the ESPN App.