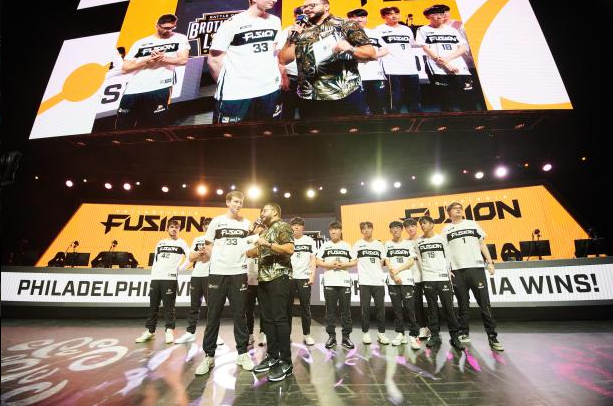 The Philadelphia Fusion top the league standings, but can they claim the title in the May Melee? (Image Courtesy Ben Pursell for Blizzard Entertainment)

When the Overwatch League kicks off its May Melee tournaments on Friday, it will introduce stakes that aren’t usually present during regular season play. A single-elimination bracket makes every game a must-win, especially with extra regular season victories on the line (3 for the champions, 2 for runners-up, and 1 for semifinalists in each region).

The May Melee comes as the league looks to experiment amidst a season plagued by canceled Homestands and player retirements left and right. If the Stage Playoffs of previous years are anything to go by, the tournament structure could inject some life into a league that sorely needs it right now.

The North American region will get the ball rolling with their Knockout matches on Friday, where the bottom nine seeds will vie for four spots in the final bracket. First up, though, is the Qualification Match, which will pit the Toronto Defiant against their Canadian rival the Vancouver Titans. Aside from that initial game, no other May Melee matches will be known until the 5-8 seeds select their opponents after it concludes. 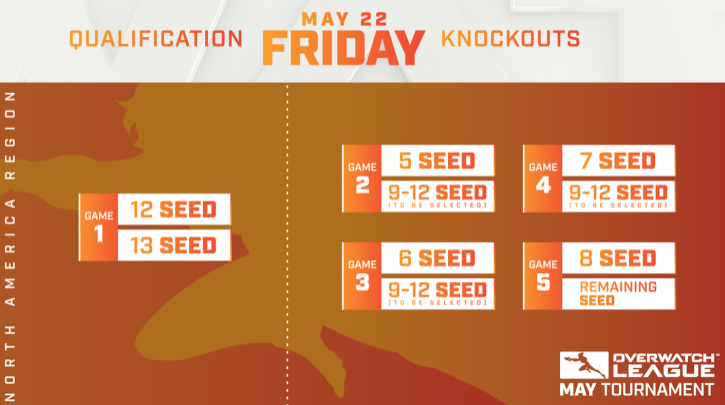 Not to be too blunt, but these teams aren’t really in the running for the May Melee. Sure, they could be good for an upset or two, but even a single win would be a huge over performance.

To no one’s surprise, Vancouver are bringing up the rear here. The roster came together in the last few weeks in the wake of the stunning collapse of the previous iteration of the Titans. In their three matches, they’ve won just a single map. Even putting up a fight against Toronto would be a massive win for a group of players who never expected to make the league this year. Maybe the new Titans will be competitive in next month’s tournament, but for now, they’ve simply been thrown into an impossible situation.

The Washington Justice were dire straits before they lost Corey and Stratus, but without that dynamic DPS line, it’s hard to see this team progressing very far. They’re still trying to incorporate new pickups, Choonghee “Stitch” Lee and HyunWoo “JJANU” Choi, with a predictably bumpy start. The two former Titans have the talent to help revitalize the Justice, but it’s too soon to expect a turnaround.

Though Boston avoided landing in the bottom two with a big upset last week against the Gladiators, they remain a tremendous underdog no matter who they face. Their season to this point has been remarkably tumultuous, but perhaps the tournament is an opportunity to turn the corner. 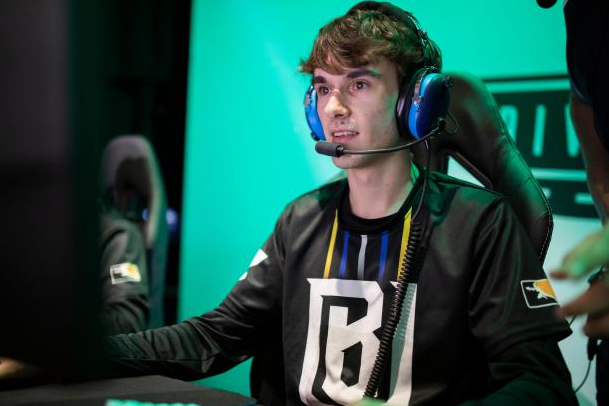 If Uprising fans want a silver lining, look towards Boston’s breakout DPS duo. Kelsy “Colourhex” Birse has been stellar on Echo so far, finally settling into his role alongside TaeHee “Jerry” Min. Together with new flex-tank Leyton “Punk” Gilchrist, they form a solid core for Boston to build on.

This is the group that conceivably has the talent to make some noise in the May Melee. They probably all fancy themselves favorites to make the quarterfinals, but more than likely, only one will.

Toronto finds themselves in the Qualification Match more out of circumstance than any particularly poor play on their part. In the three weeks of seeding matches, they ran a gauntlet of Pacific West opponents but put up good fights each time.

The Defiant seem to have found a style that works in playing around Andreas “Logix” Berghmans’s hitscan prowess. They haven’t been able to close out games just yet, but keeping it close will give them a shot in the sudden death tournament. They definitely have the longest odds of these three, but they’ve separated themselves from the back of the pack.

Houston proved an extremely difficult team to place. Despite their mediocre record this season, they have the talent to knock off ostensibly stronger opponents. Combine that with their willingness to venture outside of the standard meta, and the Outlaws become an upset waiting to happen.

Luckily for the Outlaws, they won’t have to worry about Hero Pools constraining their options, as the May Melee will be played with every hero available. Lately, they’ve been experimenting with João “Hydration” Pedro Goes Telles playing main tank. If they can find a workable composition that plays to their strengths, namely Danteh on Sombra or Echo, they might find themselves a win or two this weekend.

Dallas are another team whose impactful DPS line gives them a shot to make some noise in the tournament. Gui-un “Decay” Jang and Dong-ha “Doha” Kim have been an excellent pair so far in 2020, but it hasn’t yet amounted to consistent success against top teams. 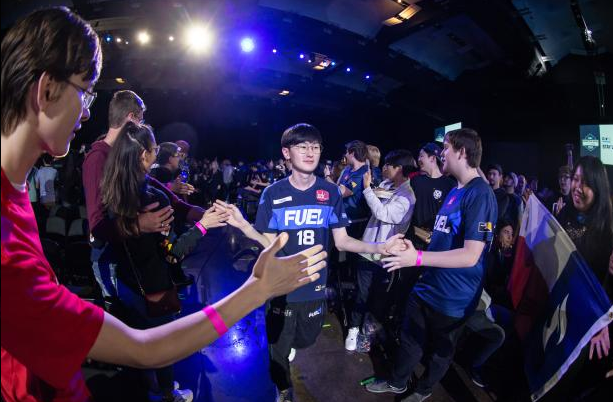 The Fuel might be one of the teams that actually suffers for the lack of Hero Pools this week. Without any restrictions, their opponents will have an easier time countering the Tracer/Sombra compositions that have been Dallas’s bread and butter. Letting Decay run wild will always give them a puncher’s chance, but they’re somewhat limited by the reliance on their superstar DPS pair.

From this point on, every team here would be massively disappointed if they don’t progress past the May Melee Knockout stage. These are the teams that can convince themselves they have a shot to take home the hardware, even if that’s not really the case.

The Reign certainly have the talent to be competitive, but they’ve struggled to find their footing during Hero Pools. Whenever they can play around Orisa, they look like a top team – they sport the league’s best teamfight win rate with the hero – but everything else has been shaky.

Given their constant roster shuffling in search of answers and the uncertain meta situation next week, confidently backing the Reign is a tough sell right now. If they don’t get bullied off Orisa, they have a chance to go far, but their inconsistency almost knocks them down a tier..

Frankly, little about the Gladiators’ recent performance suggests that they’re a serious threat in the May Melee. They’ve been incredibly slow to pick up Echo so far, and haven’t been able to counter it effectively either. The loss to Boston especially indicates a team that is failing to adapt.

Still, there are few teams in the league with the big-game experience of this Gladiators roster. Over three seasons, they’ve been among the few consistently successful teams in the league. That can be attributed to veterans like Benjamin “Bigg00se” Isohanni and Jonas “Shaz” Suovaara and a top-notch coaching staff. Even when they’re down, I trust David “dpei” Pei to have his team ready to compete.

The Valiant earn their spot by virtue of the tests they’ve faced in recent weeks. They were pushed to five maps against both Atlanta and Toronto but managed to pull out big wins that got them a bye into the top-8 bracket. 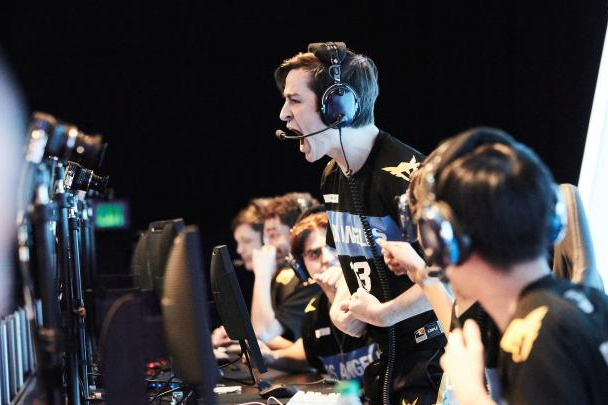 The Valiant got here by constantly innovating, pioneering the Torbjörn and Ashe picks that have come in vogue recently. Last week, they did it again with Caleb “McGravy” McGarvey playing Sigma alongside both Wrecking Ball and Winston at times. With access to the entire hero roster, who knows what they’ll come up with next?

Though their 3-0 record in May earned them the second seed in the tournament, questions linger about the Mayhem and their actual level. Their three wins came against the three worst teams in North America, and they haven’t played against a team with a winning record in a month. That match was an impressive sweep against the Paris Eternal, but Florida still haven’t been tested to the same extent as other top teams.

Make no mistake, this is no longer the same team that gave Florida the worst all-time record in the league. New talent like Jun-ki “Yaki” Kim and Nam-jin “Gangnamjin” Gang have lifted them up. They aren’t bottom feeders anymore, but it’s unclear where exactly they stand in the food chain. This weekend is their chance to earn a spot among the league’s apex predators.

When most people looked at the Eternal before the season, they saw a mismatched roster of a Korean core with a few European holdouts from last year’s team. The job that Hee-won “RUSH” Yun, Bumhoon “NineK” Kim, and the coaching staff have done is nothing short of incredible. They’ve elevated the European talent and built a cohesive team despite dealing with two player retirements and an injury to their star rookie Ki-hyo “Xzi” Jung.

After an uneven first week with Echo, Nicolas “NiCOgdh” Moret has blossomed into one of the best in the league on the hero, which should remain prominent this week. Paris looks like one of the most versatile teams in the league right now and the only one in the region that can really go toe to toe with the top two.

There’s a clear separation right now between the rest of the pack and the two juggernauts at the top. One is the reigning champs, a team that has dominated despite losing some key pieces. The other is the most consistently great squad of 2020.

Given their history, it’s tempting to call San Francisco the outright favorite. They’re the top seed, and they truly haven’t given us any reason to doubt them. The Shock haven’t lost since the first week of online play, and despite saying goodbye to two key pieces in Jay “sinatraa” Won and Minho “Architect” Park, they remain the scariest team in the league at their peak. 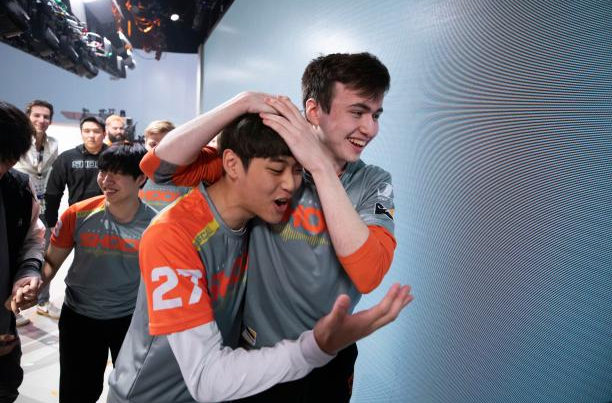 San Francisco still carry that championship DNA in the form of stars like Matthew “super” DeLisi, Hyobin “ChoiHyoBin” Choi, and Grant “moth” Espe. That’s not even mentioning Dae-hee “Crusty” Park and their excellent coaching staff. This team thrives in the biggest moments, and betting against them should make anyone queasy.

The Fusion enter as the May Melee favorites on the back of their superb consistency and otherworldly clutch factor. They haven’t lost since Week 5 and the first iteration of Hero Pools. Since then, they’ve twice avenged that defeat at the hands of the Paris Eternal, with all three matches going to five maps. In fact, the Fusion have gone the distance in five series so far this year, more than any other team. Some might view that as a sign of weakness, but to me, it suggests a team that’s battle-hardened and capable in the crunch.

Leading the charge for the Fusion as always is Jae-hyeok “Carpe” Lee, a superstar in the truest sense. He’s returned with a vengeance this year, staking his claim as the best player in the league on the basis of his tremendous hitscan talent. He’s second in the league Clutch Final Blows (defined as kills in Overtime when a team is even or down in numbers) and drives much of the Fusion’s clutch success.

What really elevates Philadelphia this year is the supporting cast, if you can even call them that. Kyungbo “Alarm” Kim is an early Rookie of the Year favorite. His fellow support Daniel “FunnyAstro” Hathaway is among the most impactful offseason signings by any team. Gael “Poko” Gouzerch and Junho “Fury” Kim are unimpeachable flex-tanks. A solid DPS rotation gives Carpe a number of capable partners. Even Sumin “SADO” Kim, once maligned as the weak link, has emerged as a remarkably consistent main tank.

The Fusion haven’t had the chance to face off against the Shock or either LA team so far this year. A May Melee title would solidify Philly as the best team in North America, if not the entire league. How’s that for stakes?