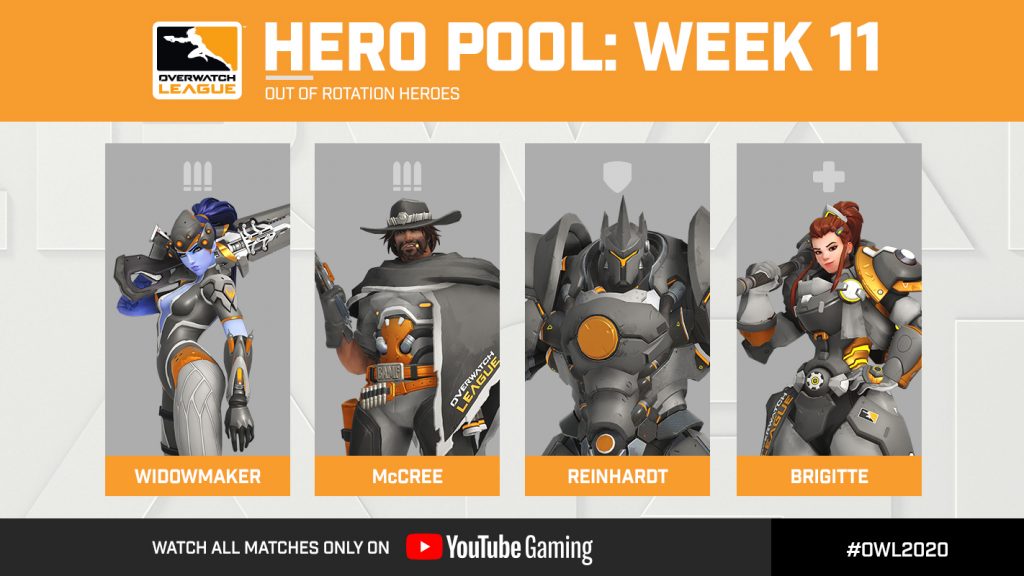 Starting from the beginning of Competitive Season 21, Overwatch has instituted Hero Pools, a system designed to shake up the meta on a regular basis. Each Sunday after the final OWL match, four heroes (two damage, one tank, and one support) will be removed from Competitive and professional play for the following week. For players and teams, strategies and hero picks must adjust as they respond to the carousel of changing heroes. Every week, Hotspawn will be examining the Hero Pool with an eye on how it will affect the meta.

This week marks the first edition of a new unified Hero Pool for Overwatch in which Competitive, Path to Pro, and the OWL will all share the same bans, based on pick rates from high-level Competitive play. For Week 11, the algorithm removed McCree, Widowmaker, Reinhardt, and Brigitte from the roster.

If this Hero Pool looks familiar, it’s because three of the four were removed from the Week 5 rotation. Some may find the repeats somewhat stale, but the comps that week produced some wildly entertaining dive comps featuring a surprising amount of Soldier 76. With Brigitte removed this time around, what can we expect OWL teams to run next week?

Brigitte’s absence next week probably means we won’t see the same sort of meta this time around, even with three of the same heroes from Week 5. The dive renaissance that week was fueled by the budding Brigitte-Tracer synergy, where Armor Packs allow skilled Tracer players to go hyper-aggressive looking for picks. Without Brigitte around, it’s tough to see Tracer taking over in the same way.

That probably leads us into more familiar territory. If Reinhardt is gone and dive loses some of its punching power, the default is going to be compositions centered around Orissa, particularly double-shield setups with Sigma.

That duo was already extremely powerful, and with Reinhardt out of the lineup for Week 11, they should only get stronger. Some teams may try to run dive comps or D.Va alongside Orisa, but the double-shield comp is so difficult to crack.

As far as the other roles go, hero picks will likely revolve around the two shield tanks. That means more static setups featuring supports like Baptiste and Zenyatta who love to sit behind shields and fire away. Some teams may opt to play aggressive and run Lucio for Speedboost, but the anti-synergy with the more stationary bunker comps makes that a tough sell.

On the damage side, the picks shouldn’t change too dramatically from what we saw in Week 10, aside from McCree. Mei and Hanzo will be the staples for teams sticking to the meta, with a smattering of Torbjorn for those so inclined.

The wild-card here has to be Sombra, specifically how committed to that pick the Chinese teams are. They have all picked Sombra at a much higher rate than Western teams so far, but this will be just their second week with Sombra available. If they stick with their guns, Sombra will be a mainstay in Asia, and matches will look very different.

One emerging issue with Hero Pools writ large is the limited time it gives teams to prepare for their matches. With a constant rotation of heroes, teams simply don’t have the time to refine their play as they scramble to find the best comps for that week. It was already the major criticism of Hero Pools from OWL players and coaches, but the return of Thursday matches only exacerbates the problem. Now some teams will only have a few days to predict the meta, experiment in scrims, and come up with a game plan.

The result is almost definitely going to be burnout and a lower level of play than could be achieved with a slightly longer time between new Hero Pools. Two weeks seems like a much more workable timeframe for players and coaches to adapt and learn the meta. As the league continues to iterate on the implementation of Hero Pools, keeping the health of their players and product in mind should be the first priority.