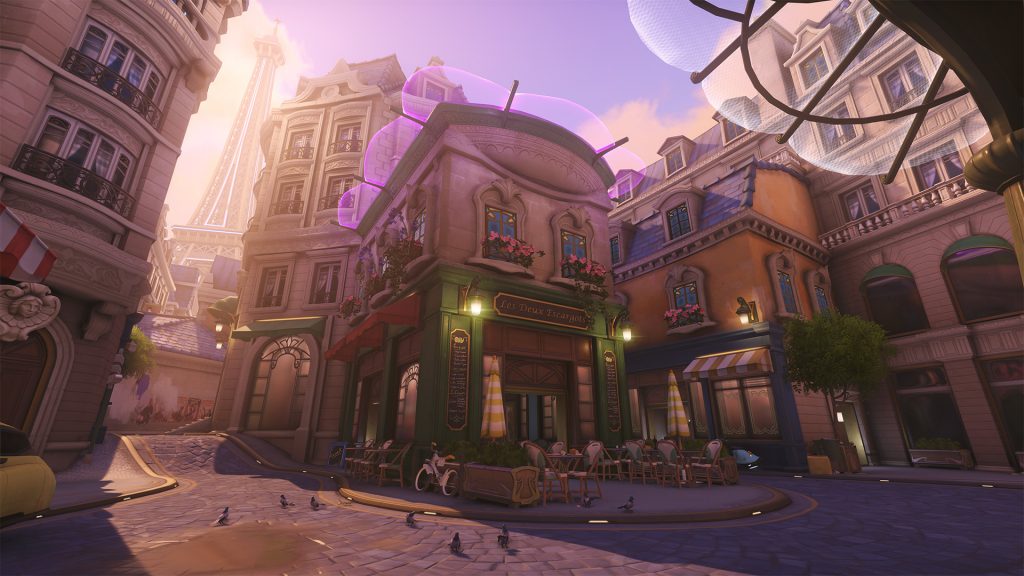 The range of Overmatch maps includes fictional locations such as Numbani, as well as imagined future versions of places such as Paris, pictured. (Image courtesy of Blizzard)

The fundamentals of Overwatch are important to any fan of the game – casual player or OWL fanatic. With team strategy relying on a complex knowledge of the map modes, the locations, heroes, mechanics and team strategy, we thought it’d be useful to break down the basics of Overwatch. Welcome to Foundation Fridays!

To start, we’re going to talk about the literal foundation of the game: Overwatch maps. With a game pool of twenty maps, it’s crucial to know what each mode is and what the objective is for each location so that you don’t get lost in the chaos when the match begins.

In Overwatch, there are four different types of “modes”  or maps: Assault, Escort, Hybrid, and Control. Each map requires teams to achieve different objectives in order to win the round and can only be played in certain locations. For example, Dorado is an Escort map which means that players need to escort a payload through two checkpoints. Spawning on Dorado means that every time you play there, your objective will be escorting the payload.  Let’s take a look at how each map is played!

On assault maps, players must take control of two points – Point A and Point B. One team focuses on capturing the points and the other team attempts to stop them. In casual play, the team that captures points win however if the defending team can stop them from capturing both points, the defending team wins. In competitive play, like in the Overwatch League, teams have a chance at attempting to capturing both points. This means that each team plays as both the attackers and the defenders.

A view of Control B on Volskaya. (Image courtesy of Blizzard)

There are five locations for assault mode – Hanamura, Horizon Lunar Colony, Paris, Temple of Anubis, and Volskaya Industries. Teams are that good at assault maps doesn’t necessarily correlate to mean they are good in all locations. Teams like the New York Excelsior are a good example of this. In the past six months, NYXL has played on Anubis, Volskaya, and Lunar. While the NYXL has a perfect 100% win rate on Anubis, they have yet to win a match on Lunar Colony. While the objective might be the same in all locations, the way a team devises and executes strategies is different.

There are five escort locations – Dorado, Junkertown, Rialto, Route 66, and Watchpoint: Gibraltar. Each map’s objective is directly related to the history of the location. For example on Junkertown, the payload you are escorting is a collection of treasures that both Junkrat and Roadhog have collected. The team that is attempting to escort the payload is delivering said treasures to the Queen’s throne.

On Route 66, attackers are delivering a US military bomb to the Deadlock Gang’s hideout. Escort and Hybrid maps are the only maps where the story of the map is integrated into the objective.

Hybrid maps are a unique combination of Assault and Escort maps. Each map has the attacking team attempt to capture a point and then deliver a moving payload through checkpoints to its ultimate destination. Hybrid maps follow the same rules of both Assault and Escort maps, but divided into two parts. Maps start in Assault mode with attackers attempt to capture a point. If completed, the attackers then have to escort the payload between two checkpoints to its final destination to win the map.

Blizzard World gives fans a glimpse at an amusement park with Blizzard games as the theme. (Image courtesy of Blizzard)

Like most competitive variations of both these maps, each team will have its chance at attacking and defending. The team with the most points at the end of the round wins.

There are five Hybrid maps – Blizzard World, Eichenwalde, Hollywood, King’s Row, and Numbani. Similar to Escort maps, each Hybrid map has a story as to why the attacking team is escorting the payload. On King’s Row, the payload is a large EMP bomb that the attacking team is attempting to get into the Underworld to detonate the bomb and save the city. On Blizzard World, the payload is carrying a glass case that holds within it random items from each of Blizzard’s franchises. We’re not quite sure why attackers need to deliver it to the Skeleton King but maybe he collects them?

Control maps are unique maps as they contain three smaller maps within each location. The goal of each mini-map is to secure the point. This is done by holding or controlling the point as the percentage ticks up until it reaches 100% for your team. Because control maps do not flip between attacking and defending, these three smaller maps function as a best of three for the round. The timer and game reset between round two and three. This means the amount of time you have left at the end of the first or second round does not carry over.

On Control maps, both teams start on opposite ends of the map and must reach the point before the other in order to set-up and control the point. As the point doesn’t become “unlocked” until 30 seconds after the game starts, both teams need to be careful of not rushing the point too quickly and sacrificing their team too early.

There are five Control locations – Busan, Ilios, Lijiang Tower, Nepal and Oasis. These maps do not have storied objectives like Escort and Hybrid maps do but they are all unique in their locations and what the environment is for these maps. For example, Busan is one of South Korea’s most popular cities, and the map is modeled to be a reflection of what Busan will be look in the future. The MEKA Base, one of the three maps on Busan, is home to D.Va’s mech Tokki.

Now that we’ve gone over the basics of the four different map modes and their locations, next week,  we will walk you through some of the more common strategies that you can find some Overwatch League teams using. Whether you want to explore the fundamentals of Overwatch or you want to better understand the crazy moments in the OWL, this is the place to learn about Overwatch.