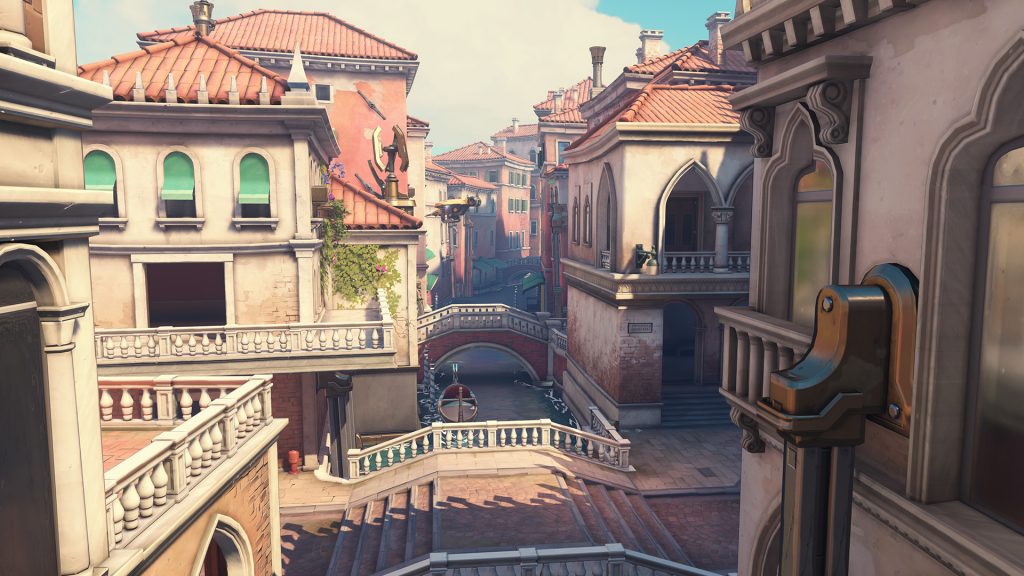 Rialto is one of several Overwatch maps that feature choke points for defensive players. (Image courtesy of Blizzard)

Unlike other maps, Assault maps are best played by focusing on the long game. This means that teams need to focus less on immediate issues like losing a team fight in the early game. Many players stress over losing a team fight and immediately rush the point again to hopefully halt any progress the offensive team has achieved. Many times in the OWL, you’ll see teams lose focus on point A and instead set up a good defense of point B. This has a lot to do with how far the spawn rooms are from the points and with ensuring players are not just feeding to the other team. We’ve seen Overwatch League teams do this a lot, especially on Anubis when point A has been lost.

On Paris, each point has good places to set up for defense and offense. The best location for a defensive strat to set-up is on the little ledge across from the chokepoint that the attackers are forced through. This is similar to Anubis where the best place for defenders to set up is on the ledge or bridge across from the chokehold there. To break this line of defense, players will have to attempt to go through the choke hold and immediately to the side to flank the other team. If you are able to break point A by forcing your opponents to move from their comfy spot, most games are won after that. This rings true for other maps like Anubis and in the Assault portion of Eichenwalde.

The best part about Assault maps like Paris, and to a certain extent all the other maps, is that the traditional GOATS strat doesn’t work as well here. This allows for players to have a lot of fun with sniper strats on defense that include the French sniper Widowmaker or an anti-dive lineup with Orisa.

If there’s one common theme you’ll find all casters, commentators, players and fans repeating about Escort maps, it’s that you NEED to stay on the payload. As simple as it sounds, you’d be surprised byhow many pros step off of the payload at the most inopportune times. This was the case for Jin “Youngjin” Youngjin from the Shanghai Dragons who stepped off the payload in Dorado in overtime against the Dallas Fuel during week three of the first Stage of Season Two. Talk about pulling the ultimate Cloud9.

Needless to say, staying on the objective is one of the best strategies you can have on escort maps. We say strategy, but really it’s the objective of the map. But besides that, how do Overwatch League teams like the New York Excelsior perform so well on escort maps? For the NYXL, there used to be a lot of reliance on Widowmaker, and it was normally met with an opposing Widowmaker especially on maps like Route 66. Because of the GOATS meta, we don’t see her as much as we did last season. Now teams like the NYXL prefer using Sombra (100% of the time on Route 66 this season) If you aren’t a stellar Sombra player, that’s fine as there are other ways to help your team win the map. Try using the Spark’s two DPS, one healer and three tank lineup, which they favor on Rialto!

Players tend to overlook the fact that when you make the first checkpoint as the attacking team, your opponents respawn location moves—and quite far away at that. This means that opponents who die later in the fight will respawn farther away and will be at a huge disadvantage at getting back to stop the payload. Pro players are good at recognizing they need to regroup farther back if their teammates have died attempting to defend the payload. They’ll regroup and set up their defense a bit farther into the map so that they don’t needlessly die while the attackers push the payload.

Escort maps require a strong defense. But if all else fails to win you a match on an escort map, just play a custom game mode where the payload is magnetic and forces everyone to be on the payload at all times. Easy win!

Hybrid maps require a team to be good at both Escort and Assault maps—which is not an easy thing to do. In the first stage of the OWL this year, Hybrid maps had the highest number of teams who won fewer than 20% of their Hybrid matches. The Hangzhou Spark had a disappointing 14% win rate on Hybrid maps (only winning one map on Hollywood). Compare that to the Philadelphia Fusion who had an incredible 83% win rate (only dropped one map on Numbani). So what strategies are these two teams using that sets them so far apart? They played on all the same maps so there must be something that is unique to both teams.

What’s interesting about the Fusion’s win rate overall in the past six months is that the Fusion have an overall win percentage of 75% and their top two maps are Blizzard World and King’s Row. Both of these two Hybrid maps feature lots of alleys, lots of ledges and a lot of opportunity for sneaky strategies—King’s Row, in particular.

King’s Row is a great example of a map that has a lot of opportunity for innovation, and teams in the OWL have taken advantage of that. The Chengdu Hunters’ had an interesting game against the Washington Justice in the first week of Stage Two in Season Two. The match not only broke the record for most unique heroes used in a matchup, but one of those pesky “unliked” heroes Torbjörn saved them the map on King’s Row. With heroes like Torbjorn or Symmetra, there are plenty of sneaky hiding places to put a turret.

Take inspiration from Luo “Elsa” Wenjie from the Chengdu Hunters and put turrets in unlikely places to both startle and overcome your opponents. Likewise, consider the LA Gladiators and their insanely good strategy against the London Spitfire when Lane “Surefour” Roberts switched heroes mid-game.

Control maps are unique and demand that Overwatch teams be prepared for all three stages of the maps. Because of their complex nature, and specific differences from other maps, it’s harder to say that one overall strategy will work for all control maps. One similarity that most control maps have is one section seems “open.” We use that word lightly because an open map in Overwatch normally denotes the use of the iconic Phar-Mercy combo. Some maps like Busan for example, are not as hospitable as others to Pharah.

Unlike other maps in Overwatch, control maps are symmetrical. This doesn’t allow for flanking or sneaking to a point because there’s no quicker route—it’s all the same. This is why you’ll see a lot more variation in control maps with Tracer and Genji picks because you need a hero who can get to get to locations quicker. Some OWL teams will run a Brigitte to help with the push to get to the point, and most teams run a Lucio as part of their GOATS strat.

Some teams like the Seoul Dynasty have what fans and commentators of the game call a “Control Squad.” Gen.G Chief Growth Officer Arnold Hur spoke to ESPN about how they have created different team compositions that are optimized for different maps. This is a good strategy for OWL teams who have a large enough roster that they can rotate out several players at a time to create these niche map lineups.

While fans, when playing themselves, can’t rotate their teams out when playing on a map in-game, remember that Control maps are all about flexibility. Make sure that you know when to rotate on maps and how different stages of the map require different team strats. If you struggle at Control maps, you’re not alone. Both the London Spitfire and the Houston Outlaws had an abysmal had 38% and 46% win rate on Control maps back in the first two stages of the Inaugural Season. The Outlaws have increased their win rate to 50% on Control maps, but they still have a ways to go before they fully understand the map type.

When in doubt, try

One of the best things about the Overwatch League is that thes players are the best of the best, and when they play on maps, they are truly showcasing what they feel is the best strategy for the map. But it doesn’t always work. Take inspiration from Overwatch League coaches and players and try things out, but don’t get discouraged if they don’t work. Overwatch maps can seem daunting when you are a new player or when you’re watching the pros flick around on screen. Understanding the maps, knowing what the objectives are and never getting off the payload will help you as a player get , er, better.

Check out next week’s episode of Fundamental Fridays where we’ll take a look at the heroes of Overwatch!