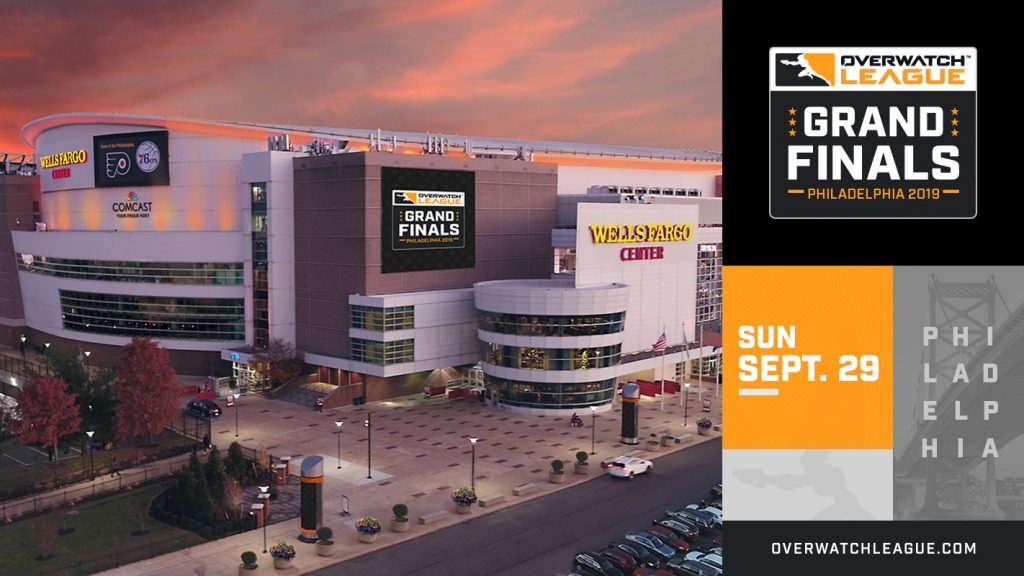 The Overwatch League Season 2 Grand Finals will be held in the Wells Fargo Center in Philadelphia. (Image courtesy of Blizzard)

The Overwatch League has announced where the 2019 Season Champions will be crowned. This year, the Grand Finals will be held in Philadelphia, Pennsylvania at the Wells Fargo Center. This historic event will take place on Sunday, September 29, 2019 and will feature a $1.7 million USD prize pool.

The Overwatch League has deviated away from the split-day Grand Finals format used in the Inaugural Season as there is only one day announced for the finals instead of two. Last year, the OWL chose an odd format for their Grand Finals: a best-of-three series of best-of-five matches. In addition to the odd format, the schedule wasn’t optimal with a first best-of-three series on Friday and the other series (one or two as necessary) done on Saturday. The struggle the OWL faced was to create a format that was enjoyable to viewers, but also wasn’t be too short or too long. Hopefully they’ve found a good balance this year with their new one-day format.

This year the Grand Finals will be livestreamed exclusively on Twitch as well as broadcast on various networks depending on where you live: ABC in the United States, TSN in Canada, Mediawan in France, Sport1 in Germany and Eterra TV in Russia. You will be able to also catch the action on the ESPN app and online at the Overwatch League’s homepage.

If you’re looking to grab a pair of Grand Final tickets, be sure to set a reminder for June 7 when ticket sales will go live. The Overwatch League has promised more information about the event at a later date including match times, ticket pre-sale availability, and more.