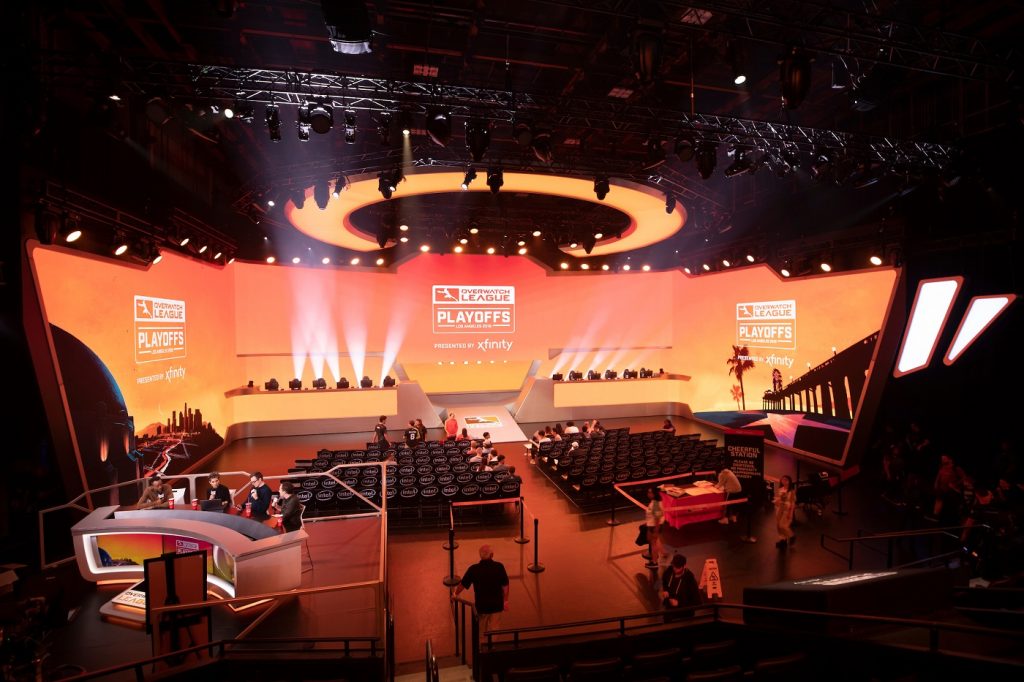 The 2019 Overwatch League Playoffs are off to a rousing start. / Photo: Robert Paul for Blizzard Entertainment

The first half of week one of the Overwatch League Playoffs has come to an end. Four out of the eight teams have already been sent to the loser’s bracket, and they’ll be fighting for their post-season lives this weekend.

The Vancouver Titans, Los Angeles Gladiators, New York Excelsior and Atlanta Reign all got off to a good start on Thursday and Friday. The Titans came back from a 1-2 map deficit against the Seoul Dynasty to win three maps in a row, taking Watchpoint: Gibraltar 3-1, Busan 2-1 and Eichenwalde 1-0. Division leaders Vancouver Titans are looking resilient and hungry for more going into their weekend bout against the LA Gladiators, and I pity any team that has to face them before the Grand Finals.

Did you ever doubt us? pic.twitter.com/qiM9zTsVVm

The Los Angeles Gladiators had less of a cut-and-dry go against the Hangzhou Spark on Thursday, narrowly prevailing with a 4-3 scoreline. Maps were traded back-and-forth by both teams, first one for one, then two for two until the teams were deadlocked at 3-3, forcing a tiebreaker to be played on Watchpoint: Gibraltar. As all superstars do, Canadian DPS powerhouse Lane “Surefour” Roberts stepped up to the plate when his team needed him most and delivered an incredible performance on one of his Season 2 signature heroes: Reaper. Over the course of the match, Surefour picked up an impressive 121 final blows with an equally astonishing 59 of those coming courtesy of Reaper’s infamous ultimate, Death Blossom. The Gladiators are set to take on a monumental challenge in the form of the Vancouver Titans on Sunday.

The New York Excelsior have hit the ground running this post-season, with what seemed like an easy win against the defending champions, the London Spitfire. The 4-1 scoreline featured not one but two clean sweep 2-0 victories for the NYXL, one on Busan and another on Ilios. Despite the death of the tank meta following the introduction of role lock, NYXL’s Kim “Meko” Tae-Hong led his team to victory using Overwatch’s newest main tank hero, Sigma. Meko’s aggressive style of Sigma play had London on the backfoot for the majority of the match and allowed the rest of the NYXL to press their attack and dictate the pace of the game.

Finally, the fan favorites Atlanta Reign faced one of the strongest teams the OWL has to offer, the San Francisco Shock. Oddly enough, the match had an even one for one trading pattern throughout, with Atlanta taking maps 1, 3, 5, and 7 while San Francisco took maps 2, 4, and 6. Even though it was a narrow victory, the Reign will be riding high going into their weekend matchup against the NYXL. If Atlanta can use this momentum as fuel, they stand an excellent chance to make a run from play-ins all the way to the Grand Finals.

The Seoul Dynasty and Hangzhou Spark have had a rough start. The Spark put up a good fight against the Gladiators, taking them to a map 7. Unfortunately, they couldn’t finish the job. However, I don’t think Spark fans have lost hope just yet. They have a difficult road ahead, yes, but their run is far from over. The same can be said for the Dynasty, who had the Herculean task of facing the Vancouver Titans in the first round. Both these teams performed admirably in the circumstances, but only one can move on. The Spark take on the Dynasty in the first match of the weekend tonight at 9:00 p.m. ET.

Friday’s matches for San Francisco Shock and London Spitfire fans were…awkward. The Spitfire bear upon their shoulders the weight of last season’s Grand Finals victory and all the expectations that accompany it. Their match against the NYXL could hardly have gone worse. Admittedly, the NYXL have been a strong team since Season 1; however, they have historically underwhelmed in the post-season, for whatever reason. For the Spitfire to stumble this hard, on a match that should not be the crux of their post-season, is troublesome. To make the situation even more uncomfortable, the OWL sent out what I’m sure was supposed to be a hype-generating tweet on behalf of the defending champions:

The skies are clear, the aces are high, and the @Spitfire have their eyes set on another championship title. #OWL2019

On the other side of the coin, we have the San Francisco Shock. Those who have read our Overwatch League Playoffs Preview piece from a few days ago will likely remember that the Shock came into the playoffs on a 7 game winning streak. It seemed that the 2-2-2 meta really favored the Shock and that they’d have their work cut out for them come this week. The Atlanta Reign had other ideas, apparently. Once again, this isn’t to say that the Shock are now hopeless. It’s merely a shame to see a team so in-form collapse at the first hurdle and lose some valuable momentum. If San Francisco couldn’t seal the deal against the Reign, a team like the Titans becomes much more daunting.

The Overwatch League Playoffs continue this weekend, starting with the Seoul Dynasty taking on the Hangzhou Spark at 9:00 p.m. ET on Disney XD and Twitch.