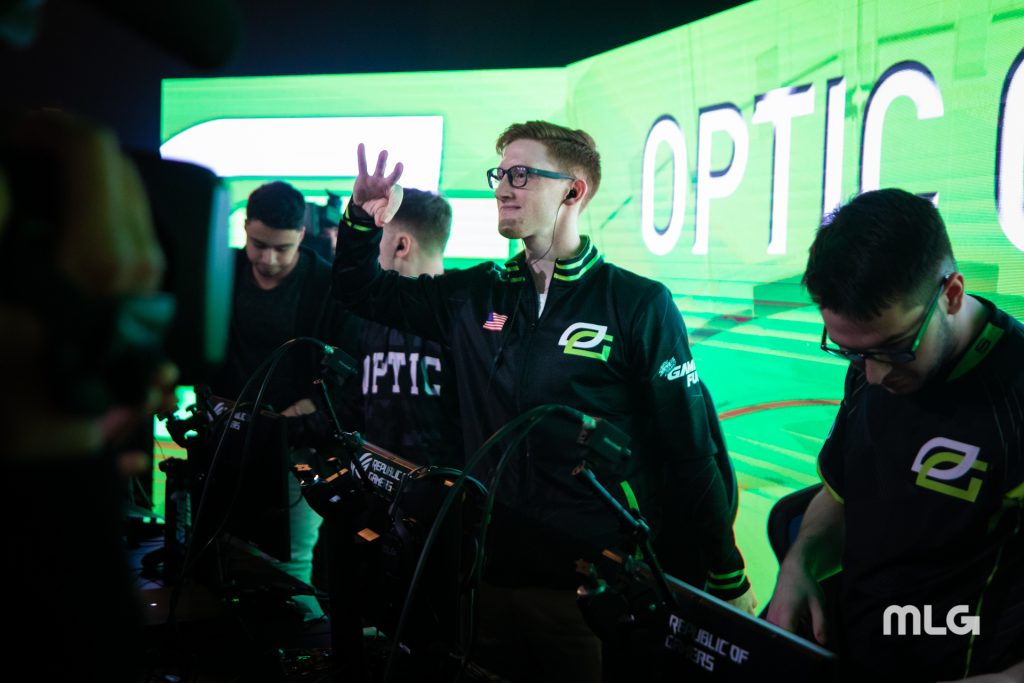 Offseason changes to the roster proved to be worth the gamble for OpTic as they went through pool play dropping one map in Las Vegas. (Photo courtesy of MLG)

Call of Duty’s 2017 champs, OpTic Gaming, have been the talk of the town since Black Ops 4 released in October. OpTic claimed online tournament and professional 2ks as the new roster looked nothing but dominant. 2017 was a rough year for OpTic as they ditched their infamous roster due to internal conflicts. WWII bringing back boots on the ground was not the prayer OpTic asked for… but Treyarch’s Black Ops 4 was.

Seth “Scump” Abner, Ian “Crimsix” Porter, Damon “Karma” Barlow, Brandon “Dashy” Otell, and Thomas “TJHaLy” Haly ended CWL Las Vegas 2018 with a clean 3-0 sweep over eUnited. Throughout the event, the young guns, TJHaLy and Dashy, proved to be worthwhile additions to the squad. It was the crowd favorite, Dashy, that lifted the MVP trophy over the crowd.

After OpTic made the announcement that TJHaLy and Dashy were joining the squad, they were expected to be the best in the world. TJHaLy and Dashy were some of the best search and destroy players in 2017, which was a mode OpTic severely lacked in. The changes proved to be worth the gamble as they went through pool play only dropping one map. The world knew the Green Wall was back on top once Scump started standing up and roasting his opposing team while amping up his own.

OpTic kept up their momentum into Championship Sunday’s bracket play. OpTic wiped out former teammate Matthew “FormaL” Piper’s Luminosity squad in a swift 3-0 execution. eUnited proved to be a tougher opponent, but OpTic rose to the occasion by finishing them in 4 maps. The toughest battle throughout the entire tournament was against Splyce in the winner bracket finals. OpTic dropped two maps back to back and faced elimination for the first time in the event. The team composed themselves and swung the momentum to their side. They won three maps in a row and send Splyce down to the loser’s bracket. Splyce played against eUnited for a spot against OpTic again, but eUnited rose to the challenge.

OpTic and eUnited are some of the best teams to watch, especially in Black Ops 4. Dashy’s 39 kill Hardpoint game sent eUnited into a tailspin and the crowd into a roar. OpTic pushed forward and took advantage of eUnited’s lack of momentum, and took the second map. eUnited tried to bring something back on the third map, but the Green Wall won the third map by winning Control on Arsenal.

This event marked the first win for OpTic since their 2017 Championship. CWL Vegas was a legendary event for Dashy as it was his first LAN win and his first MVP award. Splyce, Luminosity, eUnited, and OpTic all secured their spot in the CWL Pro League. Pro League play will begin in February as 16 of the best Call of Duty teams in the world will fight to prove their worth.