Opinion: Valve Should Stop Chasing Ever Larger Prize Pools With The International 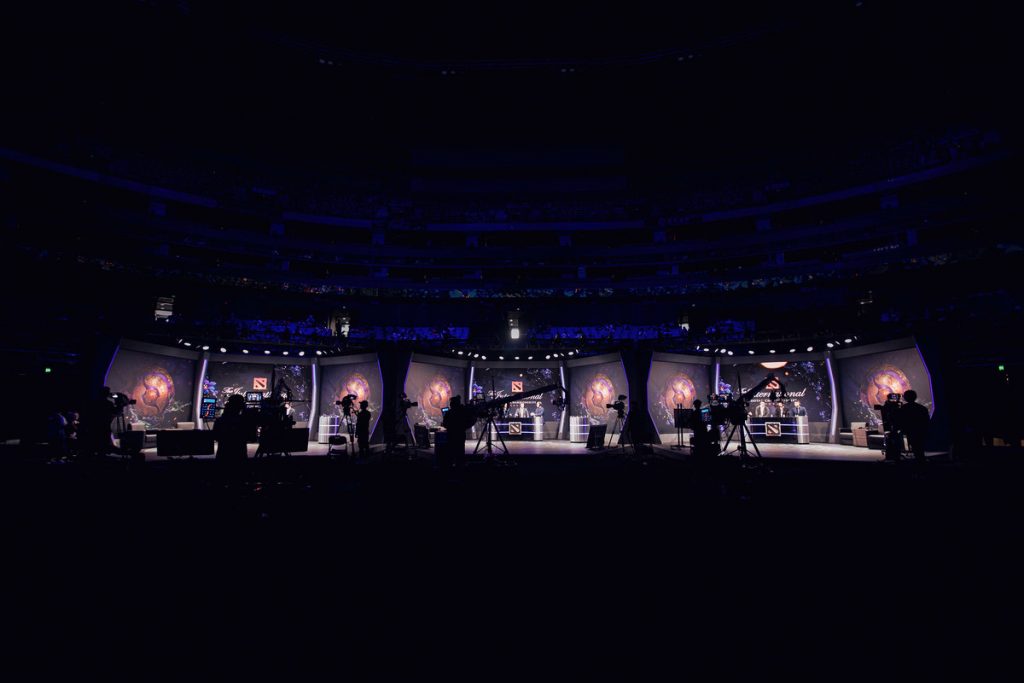 The International's title as a "millionaire's game" comes at a heavy cost to the growth of the Dota 2 esports scene. (Photo courtesy Valve)

For the tenth year in a row, Dota 2’s annual world championship event, The International, retains its crown as the single most lucrative event in esports history. The competition broke its own record anew on August 26th this year, surpassing the total payout of the previous iteration at $34,330,068.

This staggering streak is made possible by game publisher and developer Valve Corporation’s aggressive crowdfunding campaigns, tied primarily to Battle Passes and Compendiums released throughout the tournament’s rich history. These virtual items offer rare cosmetic items, additional in-game features, and even the ability to participate in fantasy Dota during The International itself. This crowdfunding model has proven to be extremely successful, with Valve collecting an eye-watering $483 million and counting ever since they began using the system in 2013.

The championship’s absolutely massive prize pool has become a point of pride for the Dota 2 community, with its players wearing it as a badge of honor. The fact that only TI itself can beat its own record is a large part of this sense of achievement, as it sort of implies that when it comes to esports, Dota 2 is king. That because the prize pool is bigger than anyone else’s, Dota 2 is alive and well and the best title in the industry.

But this vaunted self-worth comes at a price — and it’s not just the cost of buying a Battle Pass and Battle Levels. The tier 2 and tier 3 scenes of each region in Dota 2 esports are all suffering right now with small prize pools relative to those of events in the Dota Pro Circuit and The International itself, thanks to the game’s top-heavy distribution of prize money.

.@DOTA2 @valvesoftware @StatsmanBruno Please open a dialogue with top community members (casters, talent, pros) about the DPC and TI. It seems nobody is happy (pros, public, and talent) so something needs to change. Just my personal opinion or whatever

The novelty of the prize pool growing year after year is not worth sacrificing amateur and semi-pro teams, both in terms of financial stability and in growing the competitive space. Not to mention, the yearly gains will eventually taper off, as there are only so many people in the world willing to pour even more money into Battle Passes every year.

Valve will have to recognize this eventually — and there is an easy way to solve the problem as such: take a cut of the prize pool and distribute it accordingly to the upcoming Pro Circuit online leagues.

The issue of top-heavy distribution has been around for a long time in Dota 2. Valve has tried to combat this by introducing the old Major Championship system and the Dota Pro Circuit, which have helped boost payouts outside of The International. The problem with these systems however is that the same crop of tier 1 teams still dominated the events in the calendar — including the $300,000 Minors from the inaugural Pro Circuit season.

This is, of course, compounded by the presence of TI itself, the last two iterations of which have been won by the same team. In fact, TI9 had two previous finalists playing against each other in the Grand Finals, which emphasizes the “rich get richer” nature of the annual world championship tournament.

Meanwhile, squads like Infamous, Execration, Cyber Legacy, and 5men earn pittance in comparison. The OMEGA League Divine division in Europe and CIS for example paid just $50,000 in total, with $10,000 going to the team in first place. Assuming a completely even split between the five members of the team (which usually doesn’t happen in reality, depending on their arrangement within the squad), that’s just $2,000 for each person. And this assumes that you consistently win lower tier tournaments like the OMEGA League.

A World in Turmoil

Valve’s plan to alleviate this involves region-locked online tournaments across the six major Dota 2 regions, as detailed in their announcement of the 2020-2021 Pro Circuit. Each region’s league will feature a prize pool of $280,000 total, which teams will play for over periods of six weeks for three seasons a year. Moreover, squads who make it into the regional Grand Finals automatically qualify for that season’s Major, while the next two teams from there will be invited to participate in a wild card qualifier for said Major.

This would have been all fine and dandy, but the COVID-19 pandemic has thrown the world and the esports industry into unprecedented chaos. LAN events have been cancelled en masse, and even The International has been postponed by an entire year. Even as tournament organizers have opted to move to online leagues in response to the global crisis, the over amount of prize money offered to competitors is still quite small when compared to offline tournaments.

There is also still plenty of room to increase the total amount across the board, even if we assume that there is no ongoing pandemic. The proposed $280,000 per season is a nice, consistent amount of course, but taking even just 10 percent of the prize pool from The International and sprinkling it across the six regions would be a huge boon for the lower tiers of play.

That’s $3.6 million at of the time of writing, so dividing that by six regions and three seasons each gives the tier 2 and tier 3 scenes an additional $200,000 to work with per season. TI10 would still be left with $33 million at the end of the day, which places it far and away ahead of most events in the entire industry. The tournament would still retain its status as the “Super Bowl of esports” — but with the 10 percent cut in place, it wouldn’t have to come at the expense of the lower levels of competition.

In a world where everything is uncertain and cross-regional play isn’t possible, every little bit counts. Thus, it is imperative for Valve to realize that there is a big opportunity here knowing that the outlook of offline events in the near future is still very much in doubt. After all, should there be no significant breakthroughs when it comes to vaccine research and overall management of the pandemic, the scene will be forced to stay indoors and online for much longer. Knowing that they might not happen any time soon, it would be great if Valve helped the scene a little.

It really wouldn’t hurt for them to do this. No, seriously: Valve Corp. has earned nearly half a billion dollars in profit from crowdfunding The International alone. Their revenue has been astronomical since coming up with the scheme in 2013. In fact, they’ve earned so much that if we apply the 10 percent cut as proposed above to every haul they’ve taken in since TI3, the lower tiers of competition would have had around $17.4 million in additional cash prizes.

To players who don’t regularly make it to The International, that kind of money is a big deal. Sure, the first year wouldn’t have been all that lucrative given the smaller prize pools back then, but the huge jump in the payout between TI3 and TI4 would absolutely have made a difference — even more so for the years following the latter. Valve has a disgusting amount of money from The International alone, but they have yet to ever use it as a platform to give the lower tiers more to play for.

It’s high time that they did just that — and right now is the best time to do so. How exactly? Extend the Battle Pass.

Making Up for Lost Time

The Battle Pass for TI10 ends on September 19th, but as of the time of writing the third Immortal treasure has yet to be released. The Windranger arcana came out a week ago, but it’s clear that the Battle Pass still has a little bit left to give. Considering that the tournament has been postponed for so long, why not extend the Battle Pass for a month or two or indefinitely until TI10 has a solid date pencilled in?

Correct me if I'm wrong but when they say "upcoming competitive season" they are not referring to the DPC, but more so the shit fest that is online gaming as we know it without a DPC in place. Looks like more than ever you can't play Dota in NA if you want to aspire to be a pro. pic.twitter.com/hdj4dWm254

They can keep offering things that the community wants this way, like additional Immortal treasures or whatever shiny cosmetics they can come up with while waiting for the best time to resume the Pro Circuit season. Any proceeds after the cutoff on the 19th would then go to the upcoming online leagues, which would be a ton of extra money if the prize pool keeps going at the current rate. Given that several Pro Circuit tournaments and The International itself are still tentative, now is the perfect time to help out those in need.

This is a tiny price to pay to help ensure the stability of the tier 2 and 3 scenes while attracting new blood to the game at the same time. Dota cannot and should not try to stand on the shoulders of its legacy players forever anyway, and having part of the crowdfunding campaign for each TI feed into the lower tiers incentivizes new players trying their hand at competing seriously. Dota is already one of the most difficult titles in all of esports, so why not make it easier to get into it in the first place?

After all, once the current generation of tier 1 players are all burnt out from constantly playing at the highest level, who will be there to replace them and keep the legend of Dota esports going? That’s right, it’s the young guns like Nuengnara “23savage” Teeramahanon and Héctor Antonio “K1” Rodríguez who will usher the new era — if Dota even lives long enough to get there. In order to survive the inevitable exodus of the old guard, Valve needs to understand that the clock is ticking and that they need to enact the necessary measures to keep the game healthy for the future.

The International’s prize pool is just overkill at this point, particularly for the top teams that have been there multiple times now. While it is very impressive to see guys like Clement “Puppey” Ivanov and Kuro Salehi “KuroKy” Takhasomi play in Dota’s biggest stage again and again, it should not come at such a high cost.

Capping the pot at something like $25 million might also be a good idea in this regard, such that the rest of the proceeds — which we’re sure will come as the Dota community simply can’t resist buying hats — go to the tier 2 and 3 scenes. The International doesn’t need to keep having the largest prize pool in esports history anymore, and to be honest it seems almost negligent of Valve to allow it to happen while aspiring pros suffer.

It’s time for the community and Valve to cast aside their pride and admit that chasing after ever larger prize pools will eventually become a fool’s errand. It’s for the sake of the game’s present and its future.