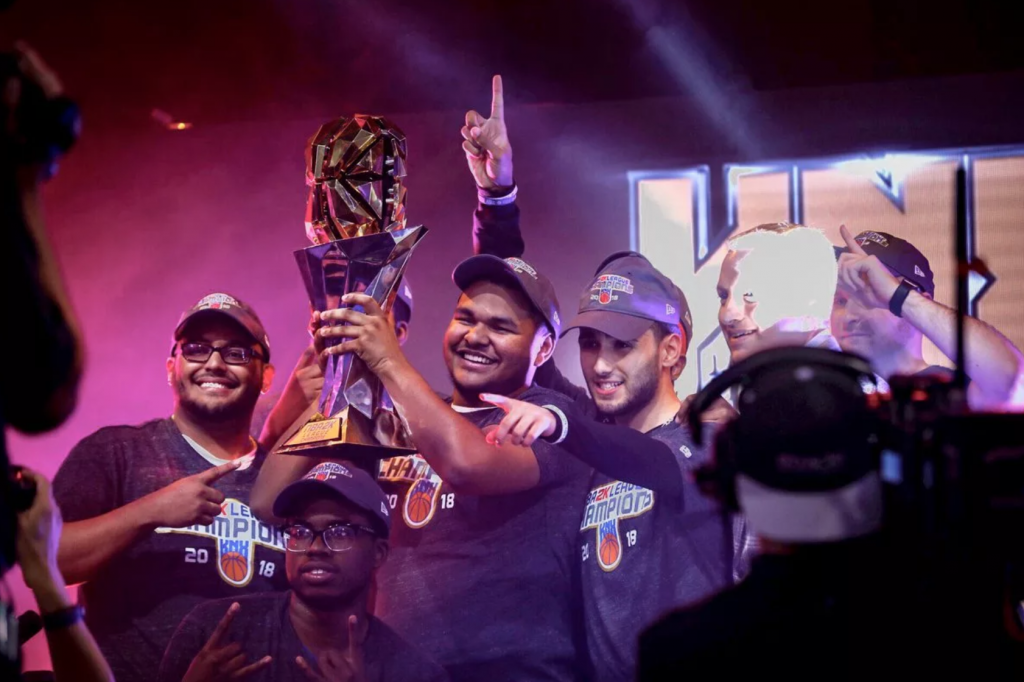 The NBA 2K League showed just how well a traditional sports league can jump right into the esports world.

Esports is growing at an absurdly rapid rate. It was not long ago that esports was relegated to the peripheries of society but it has quickly become the massive pie everyone wants a piece of. One of the people who want their piece are the traditional sports leagues.

Many hardcore fans of traditional esports don’t see games like NBA 2K, Madden or Fifa as on the same level as the likes of Dota and League of Legends. However, these games based on traditional sports brings with them proven ideas and concepts that should be borrowed.

The biggest reason traditional sports leagues have a leg-up on many esports ventures is their pre-built infrastructure. The NBA, NHL and NFL have been holding massive events for years. They have the manpower and the utilities to properly construct a stream, hold an event or produce VODs that are well beyond what most in the esports space can dream of.

These leagues have been producing thousands of hours of content every single year for decades. There is something vital to be said about that experience.

Yes, these leagues still need to hire people who understand esports. People who know the games and the audience in order to produce the best content. But hiring a couple knowledgeable people to help guide the ship is much easier than hiring the entire crew to work underneath the deck.

These traditional sports leagues also bring with them a knowledge of franchising that is just starting to permeate into the esports landscape. The Overwatch League decided to follow that model by basing their teams in specific cities, understanding that it is easier for a casual fan to care about a team if it is connected to their city.

We are also seeing League of Legends get into the franchising model as well. Though not city-based, franchising offers LoL teams in NA and EU to form a consistent bond with their fan base. You are not going to see top teams suddenly disappear from the region for financial reasons with franchising in place.

In addition to this experience and infrastructure, these leagues bring an engrained fan base. That’s not to say every fan of the Dallas Mavericks is going to tune into a Mavs Gaming contest – but it bridges the gap.

Sports have always been aspirational. We watch because we love to see what the human body can do. How fast can a human throw a baseball? What is this person’s 40-time? What ridiculous dunk can this person pull off? We watch this because is it inspiring and we like to be a part of that. As a society, we like to look at these athletes and marvel at what they can do.

How is that any different than watching esports? We watch because we see the best players in the world performing on the grandest stage with poise and accuracy. Esports fans will react the same way watching Faker go off for SKT as basketball fans will watching Kyrie Irving dribbling through a crowd of people and take it to the hoop.

In fact, hardcore basketball fans might even watch the NBA 2K League and see something that they can still do. Let’s face it – if you’re reading this, you’re not going to be playing in the NBA. But you could still grind and practice and become great at NBA 2K. There is literally nothing stopping you. That brings this aspirational nature of sports to another level.

I’m not going to say that things like NBA 2K, Madden and Fifa are going to overtake the long-standing behemoths of the esports world. What I am saying, is that the learning curve for these games are much less steep than that of a new CS:GO team. They have the ability to invest time, manpower and money into the product to bring them up to a level that is expected from esports streams and events.

Traditional sports leagues could very well help usher in a new age of esports. One that has more structure and consistency. That is something that has been sorely lacking from esports since its inception. Structure helps to bring something from the peripheries to the limelight.