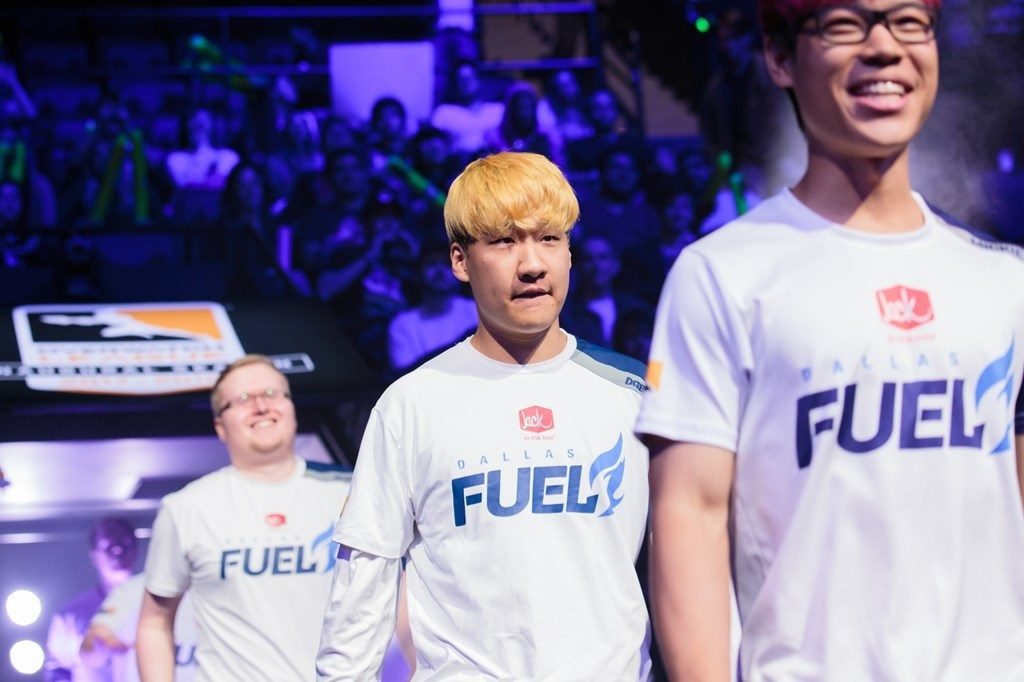 OGE and Mickie of the Dallas Fuel talked with Hotspawn about preparing for Stage 4. (Image via Blizzard Entertainment)

This week we saw the Dallas Fuel play their first match in Stage Four. The Fuel, along with the rest of the Overwatch League, went into this first series without any knowledge of what strategies would emerge from the new 2-2-2 role lock.

Prior to the Fuel’s match against the London Spitfire on Friday, July 26, we had the opportunity to talk with both Pongphop “Mickie” Rattanasangchod and Sonto “OGE” Min-seok. We discussed how the Fuel would prepare for their first role locked series and how they envisioned Stage Four turning out for the Fuel.

Before the series began, casters predicted that London would have a good showing in their series against Dallas. Their predictions were based off of which compositions were played on the first day of Stage Four and how it mirrored the meta from Stage Four last year. Many of the heroes that were played in the Dallas and London game, such as Tracer, Roadhog and McCree, were favorites from last year’s meta.

But going into this week, things were not as one-sided as many people thought.

When we talk about what the state of the new meta will be, it’s equally hard for the fans to predict what will happen as it is for the players. During our conversation, Mickie was quick to point out that there was no way to predict what would or wouldn’t happen in their upcoming matches.

Mickie said that it was, “hard to imagine what’s going to happen since it’s never happened before and people [players] will be playing differently.” This was definitely demonstrated this weekend in the OWL. Who could’ve accurately predicted that Mei would be chosen over other DPS heroes like Sombra or Pharah?  It just goes to show it’s hard to strategize when you don’t know what your opponents will be playing.

And for our 2-2-2 debut… pic.twitter.com/XqRahBoOB4

The adjustment to the role lock comes with growing pains, especially with how the players are adapting to the new rules, musical chair charades and all.

Both Mickie and OGE discussed how these adjustments were going to affect their gameplay and the team. OGE admitted that his ability to adapt to the new 2-2-2 has been “a little bit hard” and that he was “learning slowly but it’s hard.”

With everyone having to adjust to new roles and restrictions, Mickie warned us how challenging this role lock would be. Up until this point, players had been able to play heroes that were suited for the lineup. He said that before a tank hero like Zarya was picked for the lineup, normally a Dallas DPS player would play Zarya. And likewise, most DPS players would play Brigette who is classified as support. With the new changes, players are more restricted than ever with their choices. But in the words of Mickie, “I think everyone is thinking to figure out, like, what they should do right now”.

OGE also worried about his progression and development as a tank player who has had to quickly learn how to play heroes he hasn’t had much play time with in the past, such as Orisa. There were times during their series against London where OGE’s Orisa plays were not up to the OWL standards – getting caught out and getting picked off against unusual opponents like Park “Profit” Joon-yeong’’s Mei. But that doesn’t mean that OGE isn’t enjoying the change of pace or change of meta, despite the Fuel’s disappointing loss.

Most of us can admit that watching non-stop GOATS in Stage One and Two was not that entertaining, and for OGE, he flat out didn’t enjoy GOATS. He said that “I will like it [role lock] now because I played GOATS too much of the time.”

While it’s true that the role lock does not allow for GOATS, the opportunity for truly creative compositions is limited or as Mickie said, “it’s a way to make people change or make the game change at least.”

The Fuel had challenges against London and part of it stemmed from their inability to lock down their opponent. Mickie and OGE had both talked about trying to come up with new strategies for the role lock but it didn’t look like they were able to find heroes that best suit their players – nor did they rotate heroes often enough to find the best hero lineup. At least not until really pushed by London like on King’s Row in map three.

With this loss, Dallas will need to really focus on their upcoming matches and really try to study what hero drafts were used this weekend. It should come as no surprise Dallas wants to succeed this stage and when asked about it OGE was quick to tell us that he doesn’t care so much about the Stage Four playoffs but rather, he wants to focus on the season playoffs. It’ll be a hard push for this Texas team and they’ll need to take some wins to make it into the Postseason Playoffs Cutoffs. They currently sit in 13th but they have an easier Stage – no Vancouver Titans or NYXL on their schedule this stage!

We appreciated the opportunity to talk with Mickie and OGE about their thoughts on the new role lock and how it has affected how they approach the game. Look for the Fuel’s upcoming match this week against the LA Valiant on Saturday, August 3.