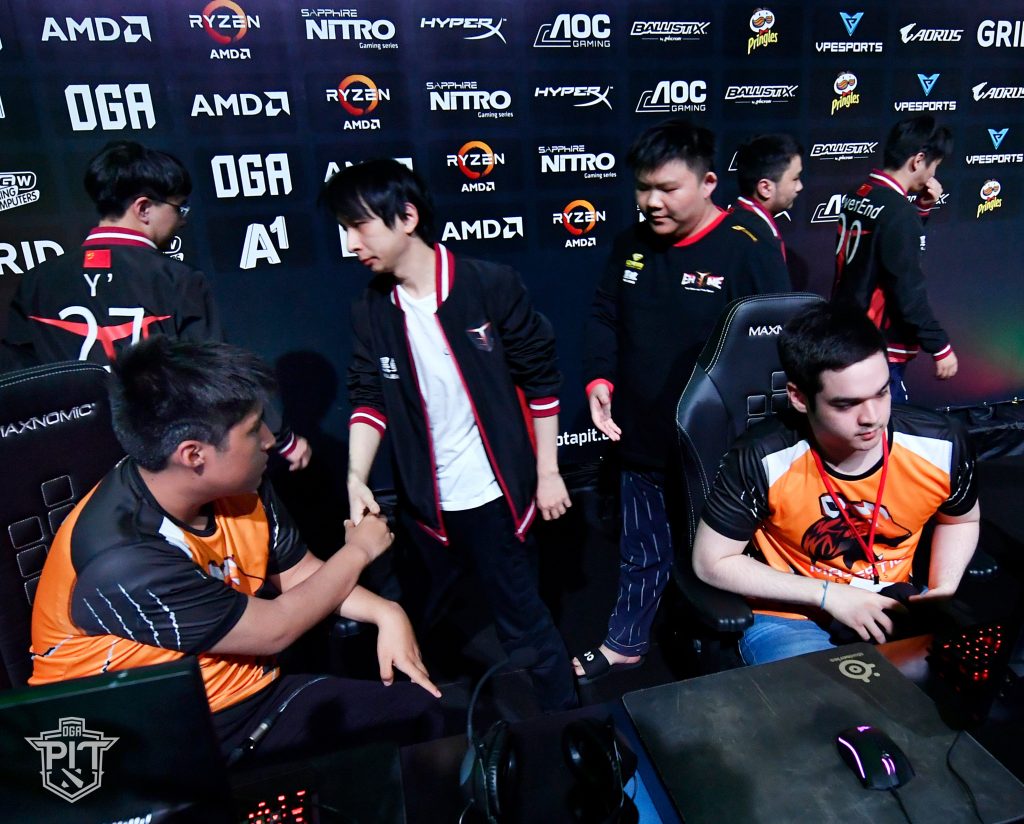 Only eight teams are at the tournament, competing for $300,000 USD, 500 Dota 2 Pro Circuit (DPC) points and the invitation to the MDL Disneyland® Paris Major. Dota PIT began on April 22, with a round-robin group stage that seeded teams into the double-elimination bracket.

If you couldn’t catch all of the elimination day match-ups—or if you want to revisit any of them—we’ve got you covered with some brief recaps!

Majestic Esports versus Royal Never Give Up

Going into this match-up, Royal Never Give Up (RNG) had to be the favorites. Majestic Esports were simply untried at the international level prior to this event, and RNG looked flawless through the group stage.

The draft seemed to go in RNG’s favor. They picked up Ursa and Outworld Devourer, two heroes who can play aggressively early. Majestic’s line-up seemed to lack the catch and control necessary to counter RNG.

The Chinese squad had a solid 2-3K net worth lead through the early game, while Majestic seemed to lag. They had to choose between objectives and team fights with the Shadow Shaman ultimate, Mass Serpent Ward, and Centaur’s Stampede was used a few times to close the gap with the RNG heroes rather than to control them.

Majestic seemed to have the weaker heroes. That is, until the 19:30 mark, when they took three RNG heroes in a five-versus-five team fight. Suddenly, Majestic’s line-up was online, ready to fight.

The synergy of Grimstroke with Shadow Shaman and Sven became clear. Grimstroke’s Soul Bind caused any unit-targeted ability cast on one of the enemy heroes in the soul bind to be cast on the other hero as well.

Once Majestic could apply pressure on RNG, they never let up, pushing the game to a quick 31-minute end.

RNG were the first team knocked out of Dota PIT on elimination day, but they were soon in good company.

Gambit Esports and EHOME both had disappointing runs in the group stage, so this match-up was an opportunity for both teams to redeem themselves.

The draft saw EHOME on the Dire side taking Drow Ranger. She was paired with Razor and Centaur Warrunner. Gambit went for a last pick Troll Warlord combined with Keeper of the Light and the tournament-popular-pick Templar Assassin.

Gambit took an early lead, bullying Zhang “xiao8” Ning’s Centaur in top lane for two early kills. EHOME didn’t get a return kill until nine minutes when they popped Gambit’s Tusk. Despite a quick pace and several attempted skirmishes, there weren’t many kills early on. By the time Gambit took the first Roshan at 14 minutes, they were sitting at a 5K net worth lead, and the kill count was 3-2 in their favor.

Gambit played cautiously despite their advantage for the next fifteen minutes. EHOME was able to push outside of their base, focusing on removing Gambit’s vision from the Dire side of the map. It wasn’t until a team fight at 33:30 that things really kicked into a new gear. A five-for-two exchange in EHOME’s favor enabled them to pick up Roshan and slide into the net worth lead for the first time in the game.

While Gambit had struggled to siege when they had the advantage, EHOME wasted no time looking for objectives. Though Gambit was able to defend a couple of times, EHOME’s Drow Ranger was able to shred through towers and barracks, and EHOME had secured mega-creeps by 47:20. Gambit tapped out only a minute later.

Gambit Esports leaves Dota PIT having won only three games and losing all their series. They’re surely disappointed with this performance, especially this late in the season.

Coming into this match-up, Majestic Esports had already survived an elimination match earlier in the day, and now it’s all on the line again. BOOM ID dropped down from the upper bracket; was watching Majestic in their first game of the day of any benefit to the squad?

Majestic drafted their comfort pick, putting Jean Pierre “Chris Luck” Gonzales on Templar Assassin. BOOM ID picked up Outworld Devourer, who had already been on the losing side twice today.

Majestic, playing on Radiant side, come out swinging. They secured First Blood and three runes, before settling into laning. Dives around the Dire mid-Tier 1 tower featured for the first ten minutes of the game. By 11:00, bottom lane had been abandoned as both teams were busy fighting mid and top.

The problem for BOOM was Majestic’s ability to overwhelm them in team fights. Majestic’s Phantom Lancer itemized to become sturdy, while Templar Assassin was soon able to slice through the Dire heroes. BOOM ID kept trying to make something happen, but a lost team fight at 26:00 around the Roshan pit was the beginning of the end. The game was called at 30:00, sending Majestic onward to their third best-of-one today.

If Majestic’s Templar Assassin makes it through in the next draft, it could only be because their opponent hasn’t been paying any attention.

BOOM ID had a respectable run and finished in fifth-sixth place, which is their best outing on the DPC so far this season.

EHOME’s second outing of the day pitted them against North American Forward Gaming. Both teams drafted for the late game with a Spectre for EHOME on the Dire side and a Terrorblade for Forward on Radiant. EHOME last picked the Underlord, a counter for Terrorblade, and a critical hero in this match.

This was a back-and-forth match-up through the first twenty or so minutes. EHOME’s stun and control was already on display though. A Roshan fight at around 23:00 saw EHOME kill Roshan, but Sand King’s Burrowstrike stunned the Dire heroes, and Lina followed up with some on-point Light Strike Arrays.

It seemed good for Forward, who had a 4K net worth lead at 24:00, but by 30:00, everything was looking Dire. EHOME itemized well, making the Underlord hard to kill due to his Pipe of Insight (HP regen and magic resistance), Crimson Guard (health, HP regen and armor) and, added soon, Guardian Greaves (health regen as an active ability and a passive aura).

While Forward were able to bring down xiao8’s Underlord in a team fight at around 40:00, he bought back. When Forward pursued, xiao8 was right there with the rest of the team to bring down the Radiant heroes. With four dead, and only Sand King left to defend, EHOME pushed their advantage, hurrying to march down middle and force Forward to call the game at 42:48.

Forward Gaming leave the tournament in fifth-sixth place. They performed better in the bracket than they did in the group stage, but this was still a rough tournament for the team. Hopefully, they can figure out what it is they’re still lacking between now and the next set of DPC qualifiers.

Both Majestic and EHOME went through the wringer today, winning two elimination games each before facing each other in the last elimination of the day.

EHOME dominated the lanes. Luo “Ferrari_430” Feichi on Shadow Fiend was particularly impressive as he had more than twice the CS of Viper at around 8:00.  Majestic were just never able to turn it around. They took an excellent fight at the Roshan pit at around 26:30, killing three of EHOME’s heroes and only losing one of their own, but it wasn’t enough to change the momentum of the game.

By 32:32, Majestic called it, sending EHOME into the lower bracket finals. EHOME’s recovery after a dismal group stage was exciting to watch. They seemed to get stronger across the day, and it’ll be interesting to see if they keep that momentum going into tomorrow’s series.

Majestic finishes Dota PIT in fourth place. For their first international LAN, they put in an exciting showing. Very few people predicted them to do well, and they finished not only second in their group, but fourth overall, surviving two of three best-of-one elimination games.

In addition to the elimination matches, one best-of-three was scheduled for April 27: the upper bracket finals between Ninjas in Pyjamas and Alliance.

Dota PIT wraps up on April 28 with a best-of-three lower bracket finals—the loser of the upper bracket finals will face EHOME—and then the best-of-five grand finals. You can watch it all on twitch.tv/ogadotapit.