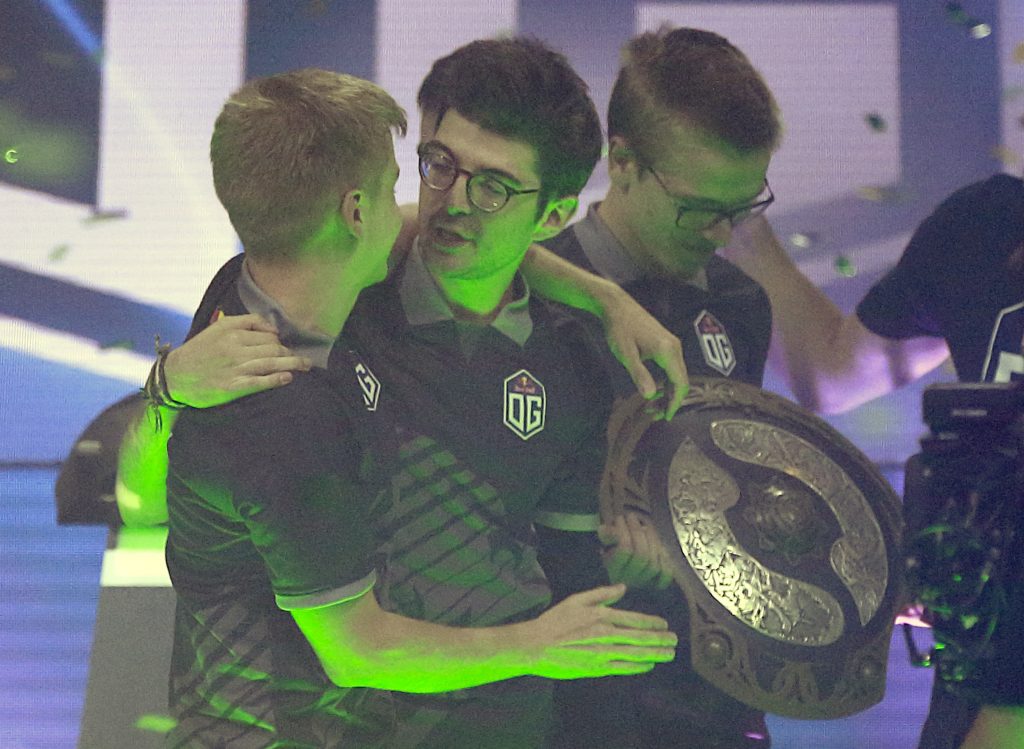 Topias Taavitsainen of OG holds the Aegis of Champions trophy as Johan Sundstein and Sebastien Debs hug after their win. (Getty Images)

The biggest underdog team within The International 8 bracket won the event to take home the largest esports prize of all time. OG managed to push through two weeks of intense matchups in the Dota Pro Circuit, and close out the tournament in an intense five-game match against China’s PSG.LGD. OG is the first team to ever win The International while managing through the open qualifier bracket.

The European team took home $11.2 million for winning the event while the second place finisher, PSG.LGD walked away with $4 million. All 18 teams that participated in the event took home a piece of the $25.4 million prize pool which was funded thanks to crowd-funding.

OG had a rough start to the season. Throughout their stumble through the Dota Pro Circuit, the team replaced three out of five of their starters. OG lost their captain Tal “Fly” Aizik and Gustav “s4” Magnusson to Evil Geniuses, and Roman “Resolut1on” Fominok to VGJ.Storm. Their current roster pushed through the TI8 open qualifiers and then won the main qualifiers for their spot in The International 8.

While all these storylines are impressive, the most mindblowing detail of The International was the story behind Topias “Topson” Taavitsainen. The International is one of the biggest events in the world, and this event was the first LAN Topson has ever attended… and he won. Topson’s win per event ratio is now a little over $11 million, which is something esports has never seen.

The final match between PSG.LGD and OG was intense and went all the way to 5 games. Each game was long, intense, and full of picks that threw fans for a loop. The final game was sent on a tilt due to Topson selecting Zeus, and Anathan “ana” Pham pushing for a mid-game comeback. Everything fell perfectly for OG as they had an unbreakable synergy.

DOTA 2 is not over for the year, as the Dota Pro Circuit starts up again in September!

Dota 2
Share
Amanda Zelauskas
Amanda has been a gamer ever since she could wrap her fingers around a controller. Her experiences in the gaming industry range from professional competition participation, corporate marketing, all the way to video game reviews. Amanda's entire life has been dedicated to video games, and now her passion is to share her stories and experiences with readers from around the world! Amanda has previously written for Newegg's Gamecrate, ZAM, and Knowtechie.