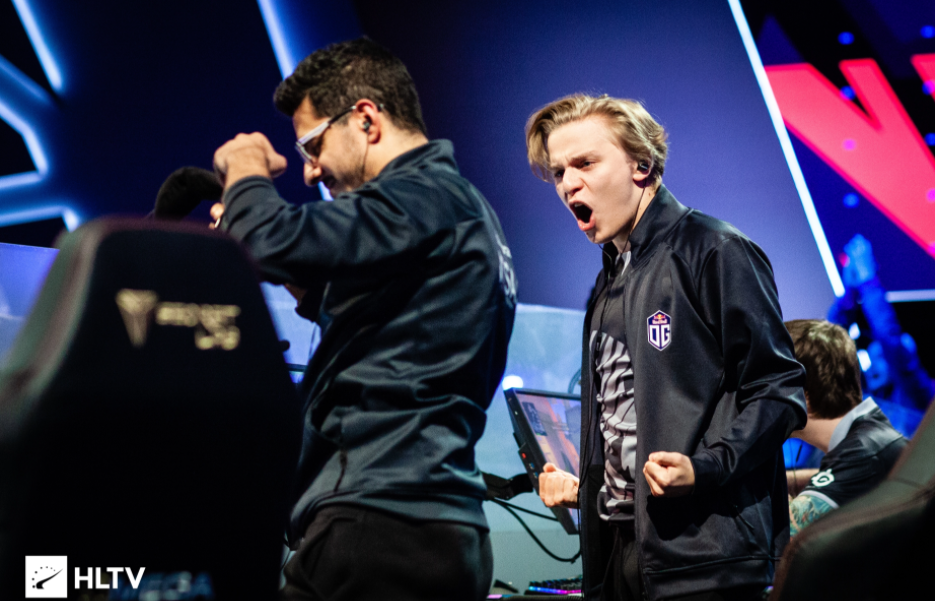 Just two days after their upset victory over group favorites mousesports, OG has taken down yet another giant in G2 Esports. Last match saw mousesports take a map before getting demolished in the following two. This time, OG never even gave G2 a chance. The other top five ranked team in Group D fell in just two maps without hitting double digits.

The first map was Mirage, picked by OG. Pistol round was a clean sweep in favor of G2’s CT side. OG did secure a plant, so they full saved in the second round and bought up in the third. The initial gun round saw OG take Mid control then split the B bombsite successfully. G2 saved two weapons and bought up pistols for the next round. That weaponry was good enough to shut down OG’s second straight Mid to B play.

G2 were in the perfect position to win another round and break OG’s economy. However, the five-man Apartments explosion proved too much for the defense to handle. OG took a second straight round with a standard A site execute, in turn breaking G2’s economy. Once again, the pistols were more deadly than rifles for G2 as they collapsed on OG in Mid to steal the round.

OG were resilient and didn’t give up on their game plan. They continued to use Mid control to pull off forked pressure onto the bombsite of their choice. G2 were insistent on using a double AWP setup, but they never tried to find aggressive angles to deny OG before they secured map control. OG won five rounds in a row before G2 broke the streak with yet another pistol buy. G2 won their only gun round to close out the half, but OG held a 9-6 lead.

The second pistol round was won by OG after defending G2’s Mid to B push. After a full save, G2 were ready to try and find their first T side round. Despite earning the opening frag, G2 lost the bomb to a pushed CT in Apartments and fell apart. G2 finally found a point in round 20 with a B site attack through Catwalk. It would be the only round they would manage as OG’s defense held their lines. They earned match point two rounds later. Valdemar “valde” Bjørn then won a 1v3 on the A site to finish map one 16-7 for OG.

Despite Dust2 being G2’s map pick, they recently showed vulnerable form by losing it to TYLOO. OG’s mojo continued from last map as Nathan “NBK-“ Schmitt pulled off a 1v2 pistol round clutch to start the game.

The first gun round came down to the wire. NBK- once again earned the final two kills to retake the A bombsite and slingshot OG into the lead. G2 took their first round with a five-man Tunnels push onto the B site. They then stormed A through Catwalk and held off the retake to start a streak of their own. After winning six out of seven rounds, G2 had their first lead in a long while.

OG spent everything they had on round 12. If G2 won it, they would cruise to a dominant first half score line. It was Aleksi “Aleksib” Virolainen who secured the round by killing two with the MP9 and denying the plant long enough for the timer to expire. The return trips to the A bombsite also failed G2, bringing OG up to eight. The final round could have gone in G2’s favor after earning a 3v2 while pushing B through mid. However, valde dropped the bomb carrier outside the site and killed two more to turn the tides and give OG another 9-6 halftime lead.

The Déjà vu continued as OG took the second pistol once again. G2 tried force buying and grenade stacking Catwalk. They did great damage and even had the round in a winnable position. Unfortunately for them, valde pulled off a 1v2 with the timer against him to keep OG in the driver’s seat.

OG burst through Long to take A in the next gun round as G2 saved two rifles. They supplemented those with three pistols in round 20 to take their first round of the half. From here, OG implemented a strategy where they pushed four into the B site through Tunnels while Aleksib lurked in Mid. They did it twice in a row to earn match point, then again in round 24 to close the map out 16-8.

This result solidifies OG as a top-level competitor here at ESL Pro League. With a 3-0 record and the head to head tiebreaker against mousesports and G2, OG are primed to secure an advancement seed. For a long time now, OG has been a team that had the potential to be great but could never quite put it all together. If these kinds of results persist, that narrative will soon be gone.

G2 have some clear issues they need to work out. Aside from Nemanja “hunter-“ Kovač who put up the most kills and damage in the server (41 kills, 98.1 ADR), no one on G2 seemed to really show up. This ESL Pro League format is unforgiving to teams who cannot quickly plug their holes. G2’s advancement is now at risk. They’ll need to do everything they can to ensure that they bounce back.