OG Are The International 2019 Winners 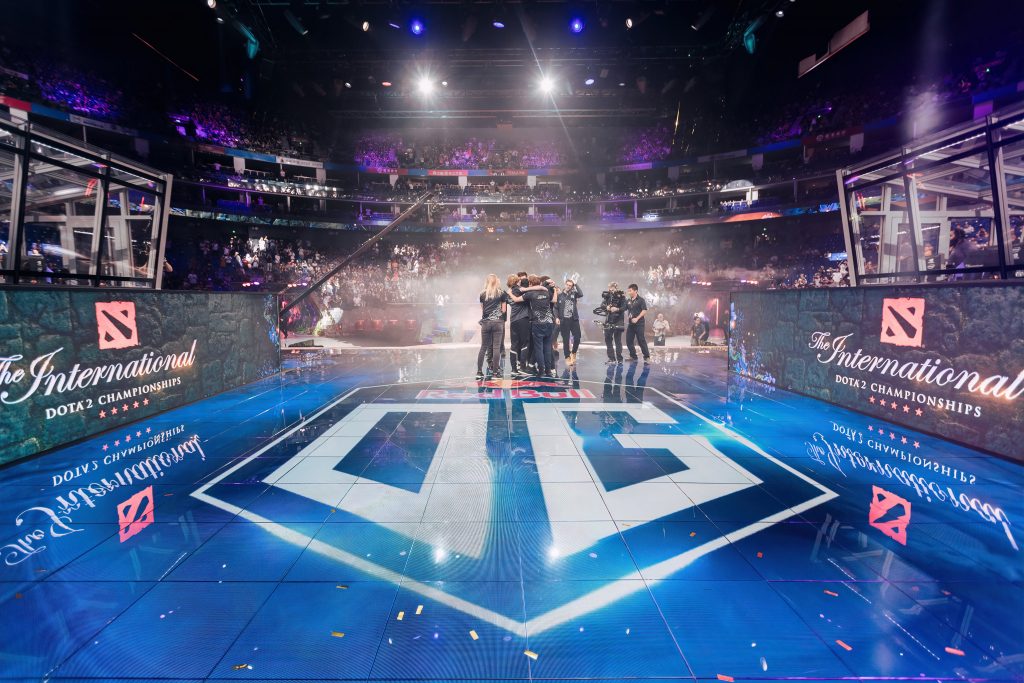 In four quick games, OG bested Team Liquid to become our The International 2019 winners and our first two-time TI champions!

The International 2019 came down to the two previous winners of the Aegis: OG, the 2018 winners, and Team Liquid who won in 2017. It took four games to crown OG as The International 2019 winners. They take home more than US$15,000,000 in prize money, but more importantly, will have their names inscribed on the Aegis and Dota 2 history. Again.

So how did it all go down?

OG were the kings of the upper bracket, muscling their way through Newbee, Evil Geniuses and PSG.LGD. On the other side of the playoffs, Team Liquid were the kings of the lower bracket, surviving a best-of-one versus Fnatic, then beating TNC Predator, Royal Never Give Up, Evil Geniuses, Team Secret and PSG.LGD. Amazingly, Team Liquid lost only one game during their journey to the grand finals. It was a record they couldn’t maintain, however.

The International 2019 grand finals came down to highly aggressive tempos and who could maintain them better.

It all started in the draft. OG, on the Dire side, were looking to the late game with a Spectre pick. They also last picked a Pugna to face down Team Liquid’s Templar Assassin in mid. However, Team Liquid looked for a fast-paced game and were also able to last-pick Meepo. This put their usually mid player, Aliwi “w33” Omar in the safe lane, and moved Amer “Miracle-” Al-Barkawi to the mid position, with the aim of eventually countering the Spectre with the Meepo.

Liquid looked to start their snowball with the first blood. They kept a slight lead on the farm front through the early game, but Topias “Topson” Taavitsainen on the Tiny got very active with rotations early on. He found three kills and one assist before having his invasion of the Radiant side of the map ended by his own death.

Team Liquid looked to keep the tempo as fast as possible, pushing towers by 15 minutes with a Templar Assassin wielding a Desolator and a Chen with a pack of controlled creeps. They never let their foot off the gas, grouping up to push out lanes, pressure towers and pick off OG’s heroes.

Liquid takes one set of our barracks but we managed to team wipe them right after!#DreamOG #TI9 pic.twitter.com/LsaGYcfT33

It looked really rough for OG until they held their base at 37 minutes with a complete team wipe of Team Liquid. OG headed immediately for the Roshan pit, and Liquid faced another round of deaths. This allowed OG to take Roshan and then push down mid to take the barracks there.

Suddenly Anathan “ana” Pham’s Spectre was too big for Team Liquid to address, and OG were taking both barracks at bottom and one of the top barracks. It looked like OG could have had it, but then Liquid started cutting them down again.

'WHAT AN END TO GAME ONE' @TeamLiquid make a surprise bee-line to @OGesports's Ancient and take the victory! #TI9 pic.twitter.com/A1hmPgNLlO

With three OG heroes down, Liquid pushed up mid, trying to force buybacks. But when ana stubbornly held onto his? Liquid’s attention turned to the Ancient. Meepo sliced it through it, suddenly sealing the deal for Team Liquid in game one.

The draft set game two up to be one of free Enigma black holes for Team Liquid, while OG pulled out the Omniknight to enable their signature run-at-their-faces style, and Topson on his “master tier Monkey King,” according to caster Ioannis “Fogged” Loucas.

This game quickly turned into a kill-fest, with OG leaving lanes early to farm Liquid heroes as a trio of cores. Liquid eventually punished the movement with a team wipe, but that didn’t slow OG’s aggression one bit. They took a few heroes in retaliation, diving the tier three tower before the tier one was down.

Gradually OG’s hunting was converted into objective-taking, dropping towers and distracting Liquid from the farming they needed to do to come online.

OG kept the pressure on and the game at such an incredibly fast and aggressive pace, Team Liquid were left in a constant position of reacting rather than acting. No where was safe for them to farm, to the point that OG punished them any time they left their base. It became a game of farming heroes as OG ran over Liquid and took game two.

If the way OG lost game one was demoralizing, the same could only be said for Liquid in game two. The series looked pretty even.

The best-of-five became a best-of-three.

Liquid changed strategies in game three’s draft, slightly. They picked up the Juggernaut, who can fight early, and an Ogre Magi to provide better early game support. OG went back for the Enchantress, Faceless Void, and Tiny with Topson on the Pugna this time around.

This draft was less mobile than OG’s game two draft, but they were no less aggressive in this game than they had been in game two. Topson’s Pugna combined with Grimstroke was particularly potent, with 11 kills at 14 minutes. They gave no one on Team Liquid space to breathe, let alone farm.

The game looked over already by 17 minutes when the safest place for w33’s Templar Assassin to farm was the Dire (OG) jungle. He just wasn’t able to get enough momentum going to repel OG’s attacks.

Topson is playing out of his mind! #TI9 pic.twitter.com/ZOIfdrOBGO

OG took the game, putting them within one win of back-to-back TI wins. They ended game three with a 1K gold per minute lead over Team Liquid. What kind of answer could Team Liquid find in the fourth game to punish OG’s pace?

Team Liquid had a new tactic for game four: let the Io through. OG had won every Io game they played since debuting ana’s carry Io in the group phase. Team Liquid beat Team Secret during the lower bracket when Secret gave the carry Io a try, mainly relying on w33’s Meepo to shut it down. OG banned the Meepo out fourth, denying Liquid that option.

Instead, Liquid looked to the potent sustaining combination of Chen and Omniknight paired with a Bristleback. The game opened with Team Liquid showing off their own brand of early-game aggression. OG’s response? Bide their time until they could take a teamfight and then pounce.

It took a few key kills for OG to find their footing and then push all the way up mid. Liquid couldn’t muster enough of a defense to stop them. It was a sudden, highly aggressive turnaround that other teams might have squandered. But not OG. They went right for the throat and took their third win, claiming the series, and the tournament.

This win was a team effort from OG. While ana and Topson both had starring moments, so did JerAx, N0tail and Ceb. OG were able to rely on each other to play a fast-paced, team-fight-oriented style.

Kudos to Team Liquid for an impressive run at The International 2019. They should be proud of their second-place finish, especially having gone through the lower bracket. They kept their cool and put in a very respectable showing, especially on such a long day at the end of such a long tournament. They take home $4,422,725.

OG are the first team to lift the Aegis for a second time. They came together in a moment of turmoil in 2018, with a Cinderella run to win TI8. This year, they struggled through the season, flew under the radar heading into the event, and then, well, destroyed. Their love of the game shone through as they memed their way through the event. They came into the tournament with a playstyle that other teams simply couldn’t match, but also with an attitude that set them above and beyond.

Congratulations, OG, on becoming our The International 2019 winners!

And to all the teams about to embark on the post-TI roster shuffle. Best of luck in the 2019-2020 Dota 2 Pro Circuit season!