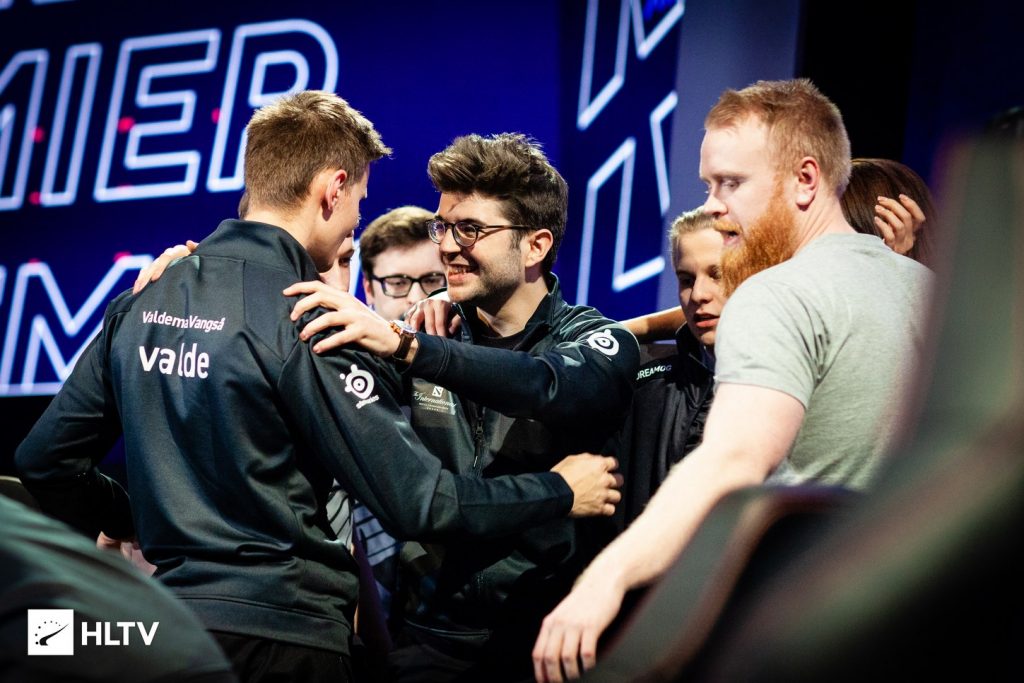 OG have defeated Na’Vi twice in a row to earn first place in Group A at BLAST Premier Fall. (Photo courtesy HLTV)

The BLAST Premier Fall Regular Season is now under way. Group A consisted of four teams all ranked within the top ten worldwide. OG and NiP of Europe, Na’Vi of the CIS, and Evil Geniuses of North America all went head to head for a guaranteed spot at the BLAST Premier Fall Finals. In the end, OG has defeated Na’Vi in two straight matches to secure first place.

Because of the format of the group stage, a team only needs to win two best-of-three matches to earn their spot at the Fall Finals. The first squad to accomplish that goal was OG. Their initial matchup pinned them against EG. The North American team was hoping to start off strong in their first international tournament in months. Instead, they fell just short.

Each squad took their own map pick with ease. OG’s Mirage started off with a close 8-7 CT half before the Europeans ran away with the T side. A 16-9 first map was the result. That scoreline was then mirrored on Inferno. The Geniuses earned seven rounds on the T side before having a near perfect defense. A single round for OG in the second half made for another 16-9 finish.

Everything came down to the tiebreaker on Overpass. It was OG who found momentum early after winning the first five rounds in a row. They would then double their score before the half came to a close. Unfortunately for them, EG found the same exact success on their defense. The North American side managed to earn a 14th round while OG only had 12. Even so, OG found a way to win the last four points in a row and snatch a 16-14 win.

Only one more win was required for a top two finish in Group A. Na’Vi were ready to fight for that position after having just taken down Ninjas in Pyjamas in two maps. Mirage was once again the pick for OG. Their T side start was a bit rougher than before as they went down 1-6. However, OG managed to fight back to a workable 6-9 deficit at the half. Na’Vi then increased their lead with a second pistol round win. Once OG got their weapons, the entire match shifted. OG found eight rounds in a row to bring themselves to a 14-11 lead. They then narrowly closed out map one in regulation 16-14.

With momentum on their side, OG went into Dust2 with great strength. They turned a lost pistol round into a seven round win streak on the CT side. Na’Vi couldn’t find a proper answer as they dropped to 5-10.

Even going four for four in pistol rounds couldn’t save the CIS squad as OG tore their defense apart to secure a 16-9 victory and a 2-0 sweep.

Na’Vi Get a Rematch

The group brackets are all double elimination, meaning teams can drop one match and still qualify for the finals. The first round of the losers’ side saw NiP sweep North America’s hopefuls 2-0. Although the second map of Inferno went to overtime, EG were still sent home without winning a single match.

The first rematch of the group took place between NiP and Na’Vi with the winners earning a top two finish. The series started on NiP’s Overpass. Despite a close 8-7 score at the half, the Ninjas looked in control for most of it. This was exemplified on their CT side. The Swedish squad was able to stonewall Na’Vi out of both sides of the map. A comfortable 16-10 win for NiP was the result.

Na’Vi was able to respond in kind on their pick of Nuke. Starting out on the T side, Na’Vi were able to plow their way through the Ninja’s defense. Aleksandr “s1mple” Kostyliev led the charge with 16 kills and 115.6 ADR. A dominant 11-4 half was the result. NiP couldn’t keep pace on their attack and eventually fell to Na’Vi 16-9, tying the series at one map apiece.

Mirage would be the final battle ground between the two squads. It would also be the shortest map of the whole group. Na’Vi managed to one-up themselves by taking an even greater 13-2 lead at the half. NiP could do nothing as Na’Vi continued to stack up rounds. Even when they looked to have an advantage, it would disappear instantly. A quick 16-4 would secure Na’Vi’s spot in the finals and a rematch against OG.

With a higher seed in finals and $12,500 on the line, OG and Na’Vi loaded into the server one last time. For the first and only time in Group A, the teams would end up trading their map picks. Na’Vi’s usually secure Dust2 pick was turned on its head by the duo of Mateusz “mantuu” Wilczewski and Nathan “NBK-“ Schmitt. They combined for 46 kills and 190.5 ADR in 25 total rounds. Meanwhile, s1mple was the only Na’Vi player who earned an HLTV rating of over 1.00.

After the 16-9 loss, Na’Vi managed to take over OG’s usual Mirage pick. This time it was Egor “flamie” Vasilyev and Denis “electronic” Shapirov who took over as the dominant force. Most of Na’Vi’s rounds continued to come from the T side as they turned an 8-7 first half into a strong 16-10 victory.

The series would come to an end on Nuke. Na’Vi started off with a four round win streak on the CT side. OG then hit their stride late into the half to earn a narrow 8-7 lead. Their second pistol round win of the match helped to increase their lead to four. In-game leader Aleksi “Aleksib” Virolainen then put up his greatest impact performance at the perfect time. His 13-5 K-D, 125.2 ADR, and 1.77 HLTV rating was too much for Na’Vi’s attack to deal with. OG would close out the map 16-12 to complete their first place run in Group A.

With that, OG and Na’Vi are confirmed for the BLAST Premier Fall Finals. NiP and EG will still have a shot at a spot at the BLAST Fall Showdown in late November. However, only two of 16 teams will be able to advance from that event, making it a very difficult road. In the meantime, Group B of the regular season will begin on October 29th.