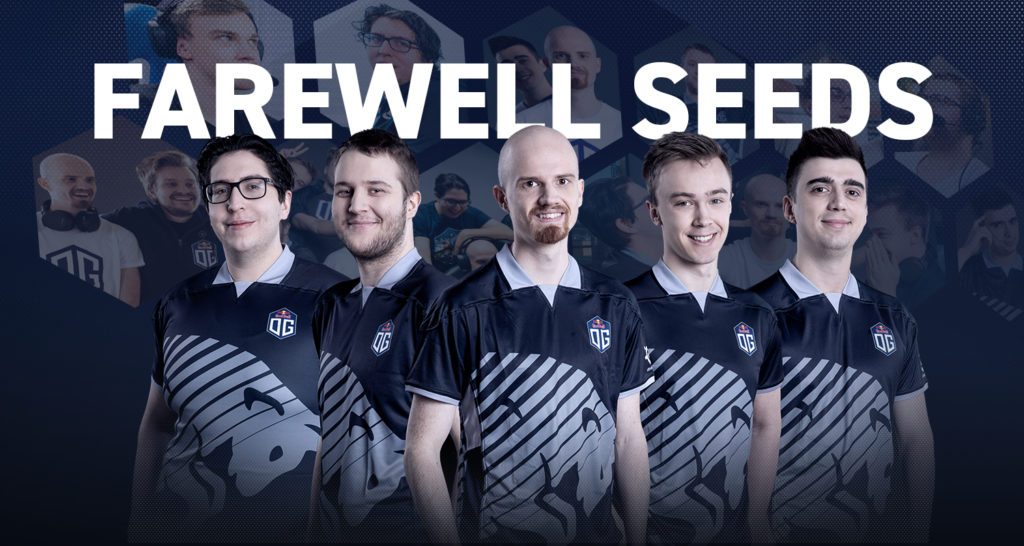 After just over six months with the organization, the roster of OG Seed is departing. (Photo courtesy OG)

The seeds have been sown, as OG announces the release of their secondary roster. The organization announced the departure of OG Seed on social media, with an accompanying post on their website.

We would like to thank all our OG.Seed players for their great work, commitment and friendship.

We are extremely proud to see how you’ve evolved and how much progress you’ve made.

The move brings to the end a relatively short but memorable period for the two-time TI winning organization. Revealed initially on November 27th, 2019, OG Seed immediately gathered a large following.

I can't express with words how grateful I am for this opportunity. I have been playing this game for so long, and getting to learn from the best minds in Dota has been an amazing journey this far. We are going to give it our very best efforts, time to play some Dota! #DreamOG https://t.co/96rOIsqgIH

The squad of Omar Mohammad “Madara” Dabachach, Rasmus Johan “Chessie” Blomdin, Andreas Per “Xibbe” Ragnemalm, Zakari William Lee “Zfreek” Freedman, and Petu “Peksu” Vaatainen, made waves in the latter part of 2019 and early 2020 and gave OG fans something to support while the main roster was on a break from competitive play.

However, while the team was popular with the fans, their success in game left something to be desired. The team fell short of both attempts to qualify for a Dota Pro Circuit Major, and also fell short of Minor appearances. Their most significant success came at smaller tournaments, such as the Maincast Winter Brawl and StayHome Challenge.

OG Seed began as a way for the championship competitors of OG to mentor up-and-coming players. However, as the team’s farewell post explains, problems appeared when the rules for TI10 qualification and the DPC 2020/2021 season forbade rosters from the same organization from competing in the same event. This problem was further exacerbated by a recent rules announcement by WePlay! about the Pushka League Season 2. Under that event’s rules, only one of OG’s squads could play in each division.

Faced with this issue, OG reportedly decided to give OG Seed 30 days notice. The release was mutually agreed, and reportedly amicable. In their post, OG gave individual praise and thanks to each player and put out an open call for other organizations to sign them.

For more information on the release, and to read OG’s shining reviews of their now former players, head to OG’s official website. Or to see OG’s main roster in action following the departure of their sister team, tune into next week’s BEYOND EPIC tournament.