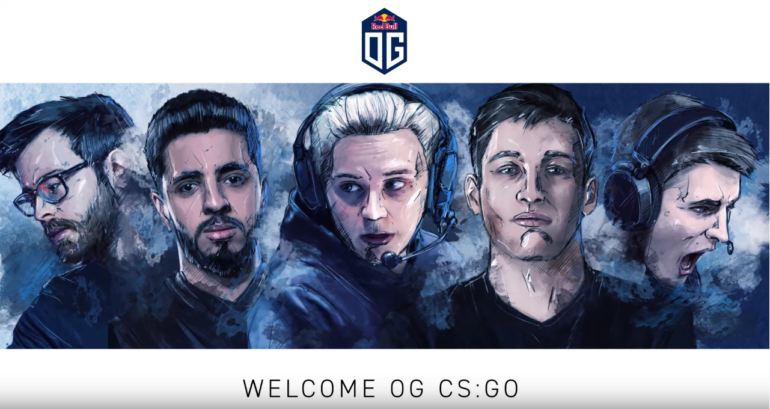 “CS:GO represents everything we cherish about esports," OG said in a press release (Image via OG)

The European Dota 2 juggernauts OG have officially confirmed its entry into Counter-Strike with a freshly built lineup.

The news solidifies an October report by 1pv.fr that forecasted OG’s foray in CS:GO. The esteemed organization is most well known for winning Dota’s most prestigious tournament, The International, back-to-back in 2018 and 2019.

You've all been waiting for this!
After 4 Majors and 2 TI on Dota 2 it's now time to tame another colossus.

Welcome to our OG CS:GO team:@NBK@Officialvalde@AleksibCSGO@m4ntuu@ISSAAcsgo

Do you want to see more? It's here: https://t.co/UMKKnD6S8q#DreamOG pic.twitter.com/f3my8Blrtl

The cast at OG is somewhat of a motley crew, bringing players from all over together in this new unit. Helmed by Aleksi “Aleksib” Virolainen, the squad will boast the expertise from both Nathan “NBK-” Schmitt and Valdemar “valde” Bjørn Vangså. The team will be rounded out by aTTaX hybrid Mateusz “mantuu” Wilczewski and former HellRaisers entry fragger Issa “ISSAA” Murad. Prior to moving forward with mantuu, the team was reportedly flirting with Elias “Jamppi” Olkkonen. Although, OG decided against the Finnish player per reported ties to a VAC-banned account.

“It is with great pride that we announce our entry into one of the most iconic and competitive esport games worldwide: Counter Strike Global Offensive,” the organization said in a release. “CS:GO represents everything we cherish about esports : it is spectacular and amazing to watch, the level of competition is unbelievable and increases every season, the depths of the game mechanics and tactics is unlimited, and most importantly its community and ecosystem has promised CS:GO to the brightest future.”

A majority of OG’s roster is comprised of discarded players following the aftermath of the Berlin Major. Aleksib, for example, was dropped by ENCE in favor of Miikka “suNny” Kemppi while NBK- was sidelined after the StarLadder Major. On HellRaisers, ISSAA has been riding the pine since after bowing out of the Major at 20-22nd place.

The mixture is simply too diverse to even speculate what they’ll be capable of at this point. The components of a winning team are there, though. The organization concluded in its release by saying:

“They are already great champions to us, and we will help them lift the trophies that they deserve.”

Those representing OG’s CS:GO team are: