OG and Na’Vi Eliminated from ESL One Birmingham 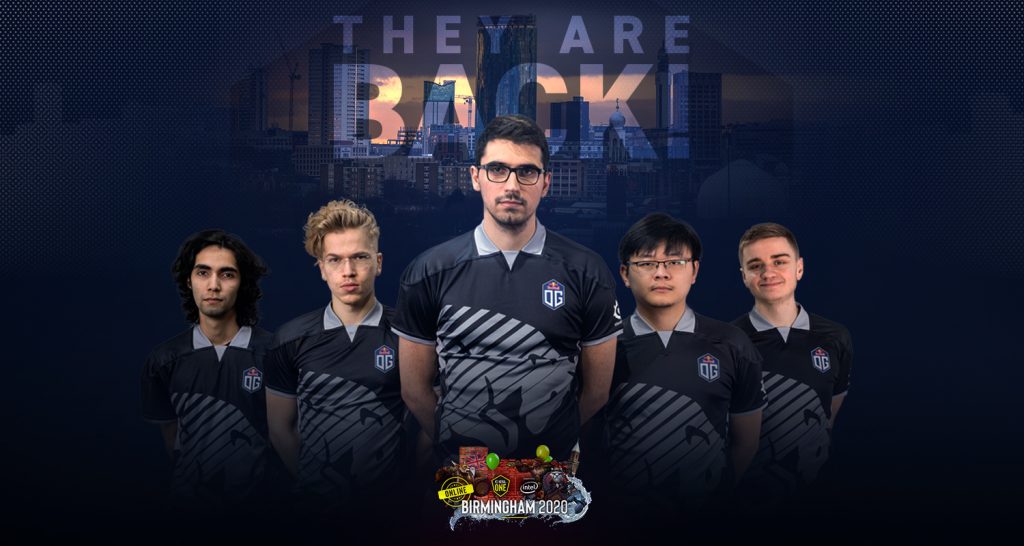 Despite entering a tournament with their full roster for the first time in months, OG found themselves eliminated before the playoffs. (Photo courtesy OG)

The group stage of ESL One Birmingham Europe & CIS concluded after over a week of dramatic games. Pitting 16 teams from across the European and CIS regions, the event lived up to its impressive legacy.

It’s been a truly titanic group stage, with over fifty matchups played over just eight days. Yet, even with so much Dota, there have been plenty of memorable moments from this intense series of matches. Not least of all the continued dominance of Team Secret, and the success once again of Virtus.pro’s youth roster, VP.Prodigy. After this whirlwind of gameplay, we’re saying goodbye to eight teams. Among them, some squads who’d you’d have expected to advance, but have fallen foul of rising stars and consistent favorites.

Secret up to their old tricks

It’s almost becoming a moot point, but once against Team Secret are on top. After victories at the WePlay! Pushka League and OGA Dota PIT 2020 events, the squad, are on track to secure their third Major tournament win on the trot. So far, the still-dominant team has barely flinched in the face of overwhelming odds. They’ve maintained a ridiculous 12-2 record this event, with just a single loss to Team Unique.

In that lone hiccup was partially due to two woeful performances from first Michał “Nisha” Jankowski, and then Lasse Aukusti “MATUMBAMAN” Urpalainen. In both of the team’s losses, the pair of carries looked out of sorts, dominated in lane by an aggressive roaming gank-squad of Unique. But while Team Unique is reliant solely on the performance of it’s very binary carries, Secret is much more of a flexible squad.

If Nisha and Matumbaman fall short, often the team’s supports can put the squad on it’s back. No better show than when Clement “Puppey” Ivanov picks up a Hand of Midas, or Yazied “YapzOr,” Jaradat decides to farm up a storm of his own.

This was no better demonstrated than by YapzOr’s Enigma play. He’s been near perfect on the hero, carrying the team by reliably landing Black Holes, even throwing them out blind at some points to catch his opponent’s off-guard.

Blackhole or Echo Slam? Which was more brutal? More so, we take game 1 in the bag! Game 2 is next! Let's go!👊#SecretDota #ESLOneBirmingham pic.twitter.com/KkqAnppAdb

YapzOr and the team look like they’re going for some kind of record. With the win streak record only tied by them recently, and Unique ending another chance at that one, then it’s the squad’s Enigma play that’s going to get them put in the annals of Dota history.

But Secret isn’t the only squad tearing up this bracket. Team Nigma, a side who has had multiple questionable performances during this extended online tournament season are again back on form. Their only roadblock and loss in the group stage were, of course, Team Secret, but even they couldn’t keep this resurgent squad from making it to the upper bracket.

VP.Prodigy shocked the world at the WePlay! Pushka League with a performance far beyond most people’s expectations. That event put the team on the map as a one to watch in upcoming events. So far, they’ve not disappointed, consistently out-performing their main-roster counterparts on the way to an impressive record over the past few months.

With the main Virtus.pro lineup taking a break for this competition, VP.P once again took it upon themselves to turn some heads. The squad started their event with a convincing defeat of HellRaisers, followed by a solid victory over Cyber Legacy. But their most impressive victory came on May 27th, when the team was pitted against a fully restored OG.

Even with the return of Topias Miikka “Topson” Taavitsainen OG looked dismal against the dominance CIS youth squad. Despite moments of brilliants from the TI9 winners, such as their almost-ace courtesy of Phoenix in the river in game one, OG just couldn’t stand up to the polished performance of VP.P. The youth squad would take them out in a straight 2-0, after a pair of consistent 30-minute victories.

This is Void's cryptic way of warning his opponent not to fight us in the river.#DreamOG pic.twitter.com/A9joQrOiLd

OG would find themselves the second team eliminated from this event after their group’s other top performer, Ninjas in Pyjamas, having won just a single series during groups. NiP, on the other hand, had confidently handled almost the majority of their group, with only a few hiccups against and impressive Cyber Legacy side, and Fly To Moon, a pair of CIS sides which have taken their opportunity to stand out.

Both sides have revealed in the freedom from Natus Vincere, Gambit Esports, and Virtus.pro, with the former pair sitting in the opposite group, and VP absent entirely. In particular, Cyber Legacy’s takedown of Alliance on May 25th showcased some fo this squad’s incredible potential. The team used Luna, a lesser-seen pick as of late, to push incredibly fast against an Alliance squad that was relying on late-game dominance.

Faced with Alliance’s threat of Phoenix in all three games, Cyber Legacy instead relied on splitting their opponent’s team, and hard pushing towers. Without a consistent team fight to engage on, Alliance found themselves out-scaled and defeated in a 2-1 victory for CL.

Yet, despite this incredible performance in the earlier matches of the stage, CL would find themselves eliminated thanks to their 10-10 individual match record. This is a team with a high ceiling, but they must convert more of their wins to decisive victories if they want to make the playoffs in future tournaments. What’s more, their departure comes with some controversy – Evil Geniuses’ Roman “RAMZES666” Kushnarev subbed in for FlyToMoon in the game one of the elimination matchup between them and Cyber Legacy. After securing a victory in the first match, Alik “V-Tune” Vorobey returned to the game replacing RAMZES666, with the series eventually ending 2-1

Natus Vincere, Team Unique, Family Team, Gambit Esports, OG, Winstrike Team, HellRaisers, and Cyber Legacy all depart after disappointing performances in the group stage. There are some big names on that list, and the likes of OG and Na’Vi won’t be happy with such a poor finish.

On the other hand, they’re spared the trouble of facing a scary-looking VP.P, a near unstoppable Team Secret, and a back-on-form Team Nigma. ESL One Birmingham 2020 Online: Europe & CIS continues throughout the first week of June, culminating next Sunday with the grand finals on June 7th. You can catch all the action live on ESL’s Dota 2 Twitch Stream.