NYXL Release All Players But JJoNak 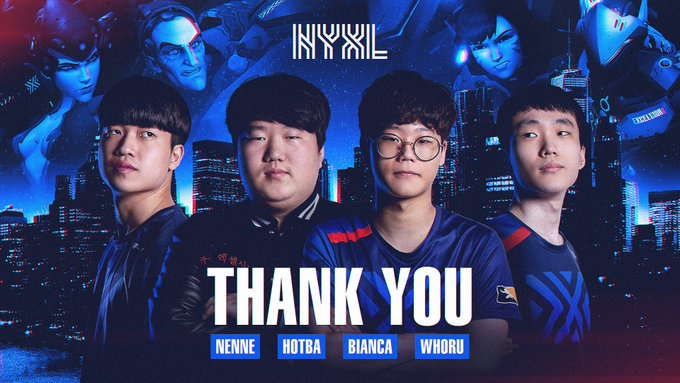 After a decent but unexceptional season, NYXL are looking to switch up their roster for 2021. (Photo courtesy NYXL)

We want to wish @nenne_chu, @HOTBA_OW, @BiaNcA_ow and @Whoru all the best as our journey together comes to an end. On behalf of all of us, and our fans, thank you for all your hard work and dedication. You will always be a part of the NYXL family. #EverUpward pic.twitter.com/295tZPKfMP

Haksal’s retirement comes as a bit of a surprise, since the 19-year-old player only competed in the Overwatch League for two years before hanging up his mouse and keyboard. He was one of the most dangerous DPS players in the world and won rookie of the year in 2019 due to the incredible performances he put on while playing with Vancouver Titans. He was signed by NYXL in June, after the Titans cut their entire roster in May.

One of the greatest Genji players of all time is retiring from the @OverwatchLeague. We are honored to have had him as part of our team during his memorable career. Thank you @Haksal for all that you've done. Wishing you all the best on your next adventure. #EverUpward pic.twitter.com/yEL5UhEiGN

HOTBA was NYXL’s starting Off Tank player throughout the 2020 season. Before joining the NYXL, he competed with Philadelphia Fusion in the Inaugural Season and Guangzhou Charge in the 2019 season. The battle hardened veteran of Overwatch performed pretty well for NYXL throughout the year, but the team decided it was time for a change in their Off Tank position.

Nenne competed with NYXL during both the 2019 and 2020 seasons. He formerly played with Lunatic-Hai and NYXL’s academy team, XL2 Academy, before earning his first Overwatch League contract playing for Excelsior. Nenne saw playtime in both of his seasons competing with the team, but he was not one of their go-to DPS picks during his time there. When he did compete, he generally played Ashe and other hitscan characters.

BiaNca and WhoRU were both OWL rookies in 2020. Like Nenne before him, BiaNcA came from XL2 Academy, while WhoRU played with Lunatic-Hai, Fusion University, and Skyfoxes before eventually landing his spot on Excelsior. Bianca only saw a few hours of playtime this season, since the team preferred HOTBA as their starting Off Tank. WhoRU, on the other hand, saw a decent amount of playtime in 2020, in part due to his hero speciality. He is known as one of the best Genji players in the world and his Genji skills became very useful for the team during the Genji meta which dominated the middle portion of the season.

Mandu left the team on November 3rd to join Guangzhou Charge. He only played with NYXL for the 2020 season, though he was inactive during the first half of the season. Mandu is known for his incredible Lucio plays and the young player will be a valuable addition to the Charge’s 2021 roster.

Thank you @mandu_ow for all of your hard work and contributions. Wishing you all the best in your journey. #EverUpward pic.twitter.com/xLgYk5rFeu

Starting Main Tank player Mano is a much more significant loss than Mandu. Mano left NYXL on November 2nd in order to join the Philadelphia Fusion. He competed for New York during the first three seasons of the Overwatch League, and was a member of the team’s founding roster. In addition to his experience in the Overwatch League, he also competed with both the 2017 and the 2019 Korean World Cup teams, winning the World Cup championship with the 2017 team.

Thank you @Mano_OWL for everything you’ve done for our organization, team, and city over the past three years. You will always be part of the NYXL family. We wish you all the best in your next chapter. #EverUpward pic.twitter.com/ZZYFZdhBb6

The final roster cuts came through on November 18th, with NYXL releasing Anamo, Libero, and Saebyeolbe. Saebyeolbe served as the team caption during the 2020 season, while Anamo and Libero were essential starting players for NYXL since the inaugural Overwatch League season. The departure of these legends throws Excelsior’s future into doubt, since it is entirely unclear what talent they will have going into the 2021 season. These final three cuts show that this team is in dire straits and is hoping to make fundamental changes to get back on top.

In the staff department, NYXL announced the departure of Player Manager Steven “Steven” Kim on November 14th. Steven was only with the team during the 2020 season.

Excelsior had a challenging year. They started their season competing at North American homestand events throughout the first five weeks of competition. During that time, they built up a solid 5-1 record and looked like they might be able to make a solid run at the championship. When the coronavirus hit, forcing New York to lockdown, NYXL decided to relocate their all Korean roster and operations to South Korea in the midst of the pandemic. They finished their season out competing in the APAC region, where they held a pretty consistent third place power rank throughout the year, trailing Shanghai and Guangzhou.

When all was said and done, they ended the season in a respectable seventh place position with a 16-8 regular season record. However, they lost the semifinals of all three APAC tournaments over the summer and were eliminated from the end of season playoffs by Seoul Dynasty in a disappointing 0-3 sweep during the APAC losers bracket final. Given the shifting circumstances of their season, NYXL still looked solid during the regular season, but their tournament play was weak to say the least. It makes sense that the team is looking to change things up for the 2021 season.

We can expect NYXL to start signing new talent in the next couple of weeks.