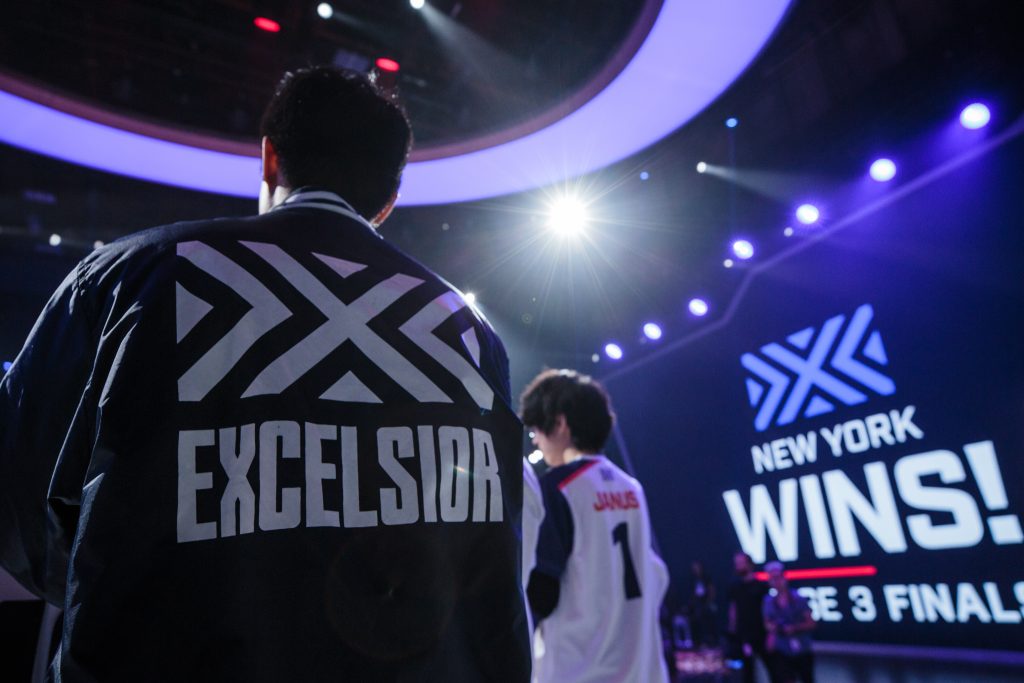 The NYXL had a strong return to OWL play as they debuted in the Pacific East. (Photo courtesy Robert Paul for Blizzard Entertainment)

Overwatch League week 12 featured a number of exciting matches in North America as well as Asia. The Fuel and Outlaws faced off in a fight to win Texas, the New York Excelsior returned to competition with an impressive pair of wins, and the Philadelphia Fusion earned their place on top of the standings.

80% of the matches in week 12 ended with a 3-0 outcome. This is the highest percentage of sweeps featured in any single week of OWL season 3. The gap between the top teams and the bottom teams appears to be widening as the top tier squads begin to master their hero pool workflow and pull away from teams who are struggling to adapt.

Orisa, Echo, Tracer, and Moira were out of rotation this week, although these changes didn’t affect the meta too much. In addition to the expected Mei, McCree, and Doomfist, there was also a significant Ashe presence throughout the week 12 matches. Ashe’s sudden OWL popularity was apparently spurred on by Valiant DPS Kai “KSP” Collins’ incredible Ashe plays in week 11. Ironically enough, the Valiant did not end up playing Ashe in their 0-3 loss to the Shock on Saturday.

On March 27th, the New York Excelsior announced that they would be stepping back from OWL competition due to New York’s order for all non-essential workers to stay home in response to the global pandemic. The last time the NYXL played was on March 5th, all the way back in week 5.

As a result of their extended absence, there were some questions about how NYXL would perform in week 12, especially with this week being their first experience with hero pool rotations. The Excelsior put to rest whatever doubts OWL fans may have had coming into the weekend, finishing with two convincing victories against the Chengdu Hunters on Saturday and the Guangzhou Charge on Sunday. They are now ranked third in the Overwatch League with a solid 8-1 record.

The NYXL were looking to take vengeance on the Chendu Hunters, who defeated them back in September of 2019. The NYXL didn’t just sweep Chengdu, they didn’t even drop a single point on any of the three maps they played during their series. The Hunters never looked comfortable in Saturday’s match. Even when the Hunters were able to win team fights, it ended up costing them too many ultimates, making it relatively easy for the NYXL to take advantage in most of the team fights.

Guangzhou Charge put up a better fight than the Hunters, at least taking two points on both Paris and Route 66. The NYXL still made their win look easy, defeating the Charge in a 3-0 sweep.

Although the NYXL unquestionably had a strong weekend, the Charge and the Hunters are at the bottom of the Pacific East division, behind the Seoul Dynasty, the Vancouver Titans, and of course the dominant Shanghai Dynasty. The NYXL will have to show us that they can conquer these squads too before proving that they are the best team currently competing in Asia.

Dallas Fuel continued their hot streak on Sunday, defeating their state rival, the Houston Outlaws, in a thrilling 3-2 series. In the past three weeks, the Fuel have won two matches and came very close to upsetting the SF Shock last week. In week 12, the Fuel came prepared for a brawl, which is exactly what they got against the Outlaws.

Both teams claim to be the best in Texas, but only one team could hold the crown. This latest match was the most exciting battle for Texas yet.

Sunday’s battle for Texas was defined by continuous strategic adaptation by both teams. The series was a back and forth brawl which showed off a variety of interesting team compositions and playstyles. Throughout the match, players were constantly switching characters and strategies to try to best the opposing squad. The result was a highly entertaining match filled with a huge number of diverse hero picks.

Unsurprisingly, Gui-un “Decay” Jang was named player of the match for his high impact DPS plays. Decay showed off a diverse array of heroes, jumping between the hitscan gunslinger McCree all the way over to dive DPS Genji, who isn’t even in the meta. Throughout the five maps, Decay played Reaper, Hanzo, McCree, Ashe, and Genji. Over the past few weeks the Fuel have been finding great success by trusting Decay’s DPS instincts, and today was no different.

This match was the closest and most interesting match featured in week 12.

Shanghai climbed into second place in the OWL rankings, after giving Seoul their first loss to send them from first down to fourth in rank. The Dragons ranking currently sits just below the Philadelphia Fusion, who have one more win than the Shanghai. The Dragons have now swept five matches in a row in the Pacific Division, and haven’t lost since getting swept by the Chengdu Hunters in week 8.

Shanghai is unquestionably one of the strongest teams in the Pacific East division, after defeating their closest competitors, the Seoul Dynasty, in a heavily one sided 3-0 series. Shanghai’s overwhelming victory left OWL commentators Brennon Hook and Josh Wilkinson stunned. They played a Reinhardt-heavy variant of double shield on the first two maps and a dive composition on the final map. Both compositions were played as death balls and gave the Dragon’s DPS the space they needed to find crucial picks on Dynasty players. During the final two maps, the Dragon’s defense held so well that they barely needed to rely on their offensive capabilities at all.

The biggest factor in this win was the Shanghai DPS line. Jae-won “LIP” Lee and Byung-sun “Fleta” Kim out damaged and outplayed Dong-eon “FITS” Kim and Joon-yeong “Profit” Park throughout the series. Fleta formerly played for the Dynasty. He came over to the Dragons at the start of season 3 and has elevated the Dynasty’s DPS effectiveness immensely. Lip was named the player of the match for his dominant performance on McCree. Despite Lip’s consistent high level play, the Dynasty never seemed to focus on killing him.

The Dragons also swept the Charge for the third time this season. In every match between Guangzhou and Shanghai, the Dragons have shown that they are superior in every way. Going into OWL week 13, Shanghai are definitely the team to beat.

Florida claws their way back into relevance

Florida easily dispatched the struggling Boston Uprising on Sunday in a 3-0 sweep. Florida entered the match the favorite, considering Boston’s roster woes and their horrific season record. The victory brought Florida’s record back to an even 4-4 for the season.

The Mayhem destroyed the Uprising, even setting a new record of 24:09 for the fastest win in OWL history. Florida ended up landing 122 final blows to Boston’s measly 37. The player of the match was Mayhem’s main tank San-ha “Karayan” Choi. Karayan struck an excellent balance between maintaining a strong defensive position and aggressively pushing to make big plays and land big shatters. Overall he was an excellent anchor for the Mayhem team to rely upon.

The Florida Mayhem started off the season with a disappointing 1-3 record. Many wrote the team off as irrelevant after their disappointing start, however the Mayhem have clawed their way back to a 4-4 record. They even beat the Paris Eternal, who are considered to be a top tier team. Florida is currently ranked 9th in the overall OWL standings and third in the Atlantic South Division behind the Atlanta Reign and the Philadelphia Fusion.

In the post game interview, Mayhem coach Kim “KuKi” Dae-kuk credited his team’s improved team coordination, communication, and individual development for their impressive victory. Only time will tell, but it’s hard to count Florida out just yet, considering their performance over the past couple of weeks.

The Fusion defeated the Atlanta Reign in a decisive 3-0 sweep on Saturday. Although the game between these two divisional rivals was expected to be close, the Fusion ended up dominating the Reign. Their flawless performance perfectly exemplified why they deserve to be the #1 ranked team on the OWL standings.

Andrej “babybay” Francisty and Jae-hyeok “Carpe” Lee ended up with similar stats throughout the match, with both playing primarily Ashe and McCree. The only map in this series which was close was the second on Volskaya Industries, which ended up going six rounds. Throughout this map, the Fusion and Reign looked pretty evenly matched, though the Fusion ended up taking it 6-4. The first and final maps were dominant wins for the Fusion, who made the victories look effortless.

The key to the Fusions success this season has been their support core with Daniel “FunnyAstro” Hathaway and Kyungbo “Alarm” Kim giving the tanks the support they need to perform at the highest level. When the tanks can provide space for Carpe to deal out damage, the Fusion are able to consistently win matches. There is no question that this Fusion squad is the best we have seen in the Overwatch League and it appears that they are only getting started.

The player of the match was Alarm, who played Ana throughout the match. The main support went above and beyond his healing responsibilities, landing huge sleep darts and anti-grenades against the Atlanta Reign. He killed 23 enemies with biotic grenades and landed 24 sleeps throughout the brief three game series. Alarm is a rookie who was brought up from the Fusion Academy team at the start of OWL season 3. He has proven to be an incredibly effective main support player and an essential addition to the 2020 Fusion roster.

Thus far, Season 3 has gone incredibly well for the Philadelphia Fusion. Led by their DPS role star, Carpe, the Fusion have secured an impressive 9-1 record over the first 10 games of the season. They are certainly the team to watch right now, alongside the 7-1 NYXL and the 8-1 Shanghai Dragons. Going into week 13, the San Francisco Shock, London Spitfire, Atlanta Reign, and Seoul Dynasty also sport respectable records.

With eight weeks left in the season, and a change in formatting for the foreseeable future, there is still plenty of time for teams like the Florida Mayhem, Paris Eternal, and L.A. Gladiators to also prove themselves worthy challengers for the OWL season 3 title. This season is still up for grabs. 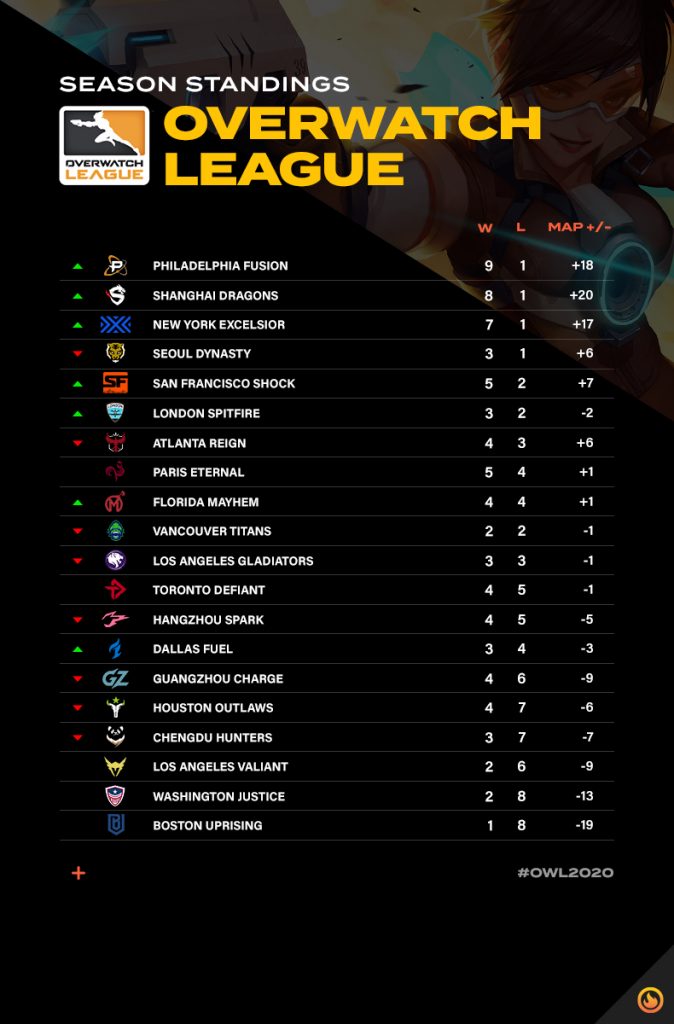 What to expect in week 13

Sunday’s matches will include the Seoul Dynasty versus the Hangzhou Spark, the Chengdu Hunters versus the NYXL, Philadelphia Fusion versus the Paris Eternal, the Florida Mayhem versus the Boston Uprising, and the Toronto Defiant versus the L.A. Gladiators. Sunday’s match between the Fusion and the Paris Eternal will also be an interesting one to watch. The Eternal and the Fusion have played twice in season 3, with each team winning one match. Philadelphia is looking to maintain their top spot on the rankings, while Paris will be looking to prove that they are a top contender.