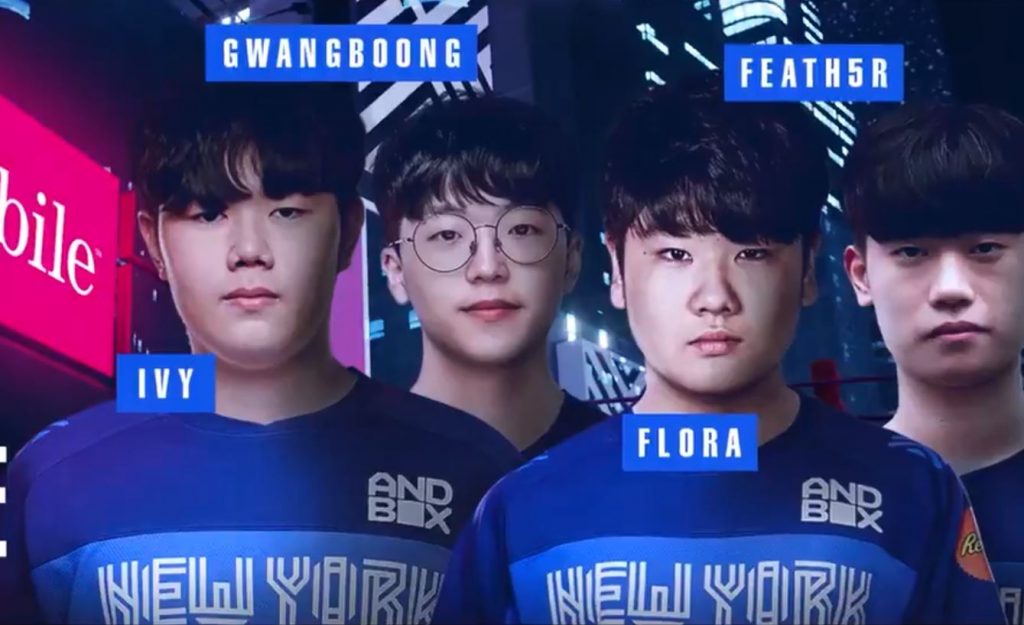 New York is looking to turn things around in 2021 with some fresh talent. (Photo courtesy NYXL)

BiaNcA rejoined New York Excelsior after temporarily leaving the team in October. He specializes in Zarya and D.Va, and he competed with NYXL throughout the 2020 season as their starting Off Tank player. Before joining NYXL in late 2019, he competed for Excelsior’s academy team, XL2 Academy. BiaNcA joins JJoNak as one of the only returning players to this line up for next year.

The team picked up Yakpung to serve as their Main Tank player for next year. Yakpung competed in the Overwatch League with the Toronto Defiant during the 2019 season. After Defiant released him in late 2019, he spent 2020 competing for Korean Contenders team O2 Blast. If all goes well, 2021 could be a huge year for Yakpung as he returns to the Overwatch League for the second time.

JJoNak will return to NYXL for his fourth Overwatch League season. He is a founding member of the NYXL and was named the Overwatch League’s inaugural season MVP in 2018 due to his incredible skills with Zenyatta. As the only remaining inaugural member of the NYXL, JJoNak’s leadership and performances will remain a focal point of this team in 2021.

Friday is a Korean support player who will be a rookie in the Overwatch League in 2021. He has only been competing in Overwatch since 2019 and he spent the 2020 season competing with the Korean Contenders team OZ Gaming. Although OZ Gaming didn’t perform particularly well this past year, Friday stood out as one of the more skilled and flexible support players in Korean Contenders, thus earning himself a spot on the NYXL support line alongside JJoNak.

NYXL’s biggest pickup for their 2021 DPS lineup is former Fusion star Seung-hyun “Ivy” Lee. Ivy is an Overwatch League legend, who made a name for himself as one of the most flexible and deadly DPS players around while competing for  the 2020 Philadelphia Fusion. Before playing with Fusion, the Korean player competed for Toronto Defiant during the 2019 season. Ivy brings a lot of skill and experience to this New York roster, and he was an excellent pick up for the team.

Flora will be an OWL rookie during the 2021 season. He played for a number of different Contenders teams over the past couple of years, including Meta Athena, O2 Blast, Armament, and most recently Team Diamond. He specializes in hitscan heroes like McCree, Widowmaker, and Ashe, though he is also known for playing Sombra when the meta calls for it. At the tender age of only 18 years old, 2021 will be Flora’s first year of eligibility for the Overwatch League.

Gwangboong will also be a rookie next season. He has only competed in tier 2 Overwatch since the start of 2020, playing the hitscan DPS role for Korean Contenders teams like UNNAMED and Team Cat. Gwangboong is a strong pick up for NYXL, however, he won’t be eligible to actually compete in an OWL game until he turns 18 on March 1, 2021. So he will be one of the youngest competitors in the league next season.

FEATH5R was NYXL’s final DPS pickup in the off season. Like Flora and Gwanboong before him, this will be FEATH5R’s first year in the Overwatch League. He has competed in Korean Contenders since mid 2019, playing for teams like Gen.B, GGTC, and most recently playing for Talon Esports. He is a flex DPS player whose hero pool is complementary to Ivy’s hero pool. Between the two of them, they can play pretty much every flex DPS hero in the game.

After a rough 2020 season, in which NYXL was forced to switch divisions mid-season and struggled to put on strong performances, the team is hoping to turn things around next season. Their 2021 roster features a lot of new faces, including several very young players who are itching to prove themselves. With the Overwatch League starting date delayed, fans will have to wait until next spring to see if this team has what it takes to rise to the top of the APAC division.