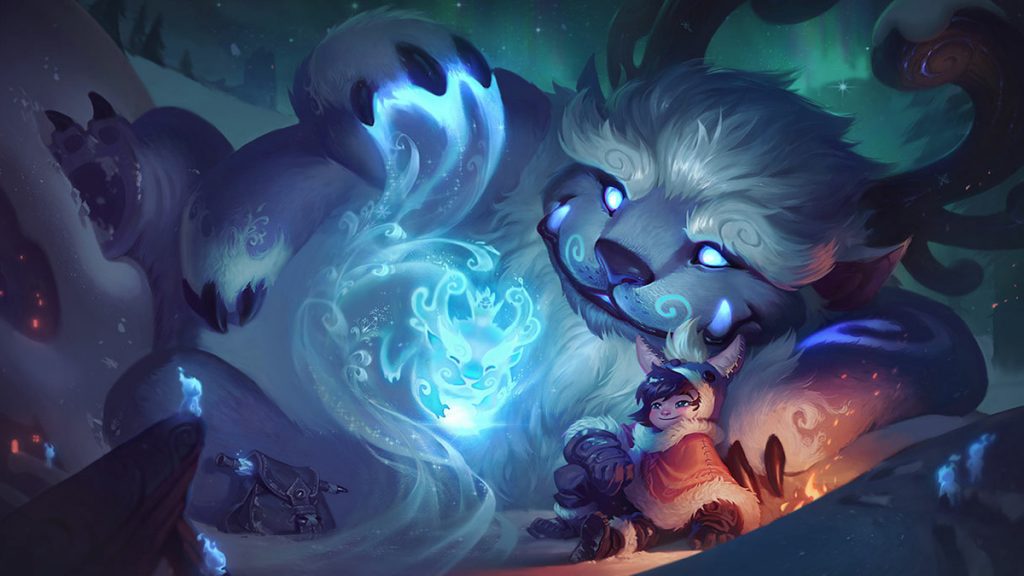 Faker started playing Nunu mid, and it has begun to trend in solo queues around the world. (Photo courtesy Riot Games)

Nunu is a League of Legends Champion that is seeing some playtime in mid lane solo queue ladders around the world. They are traditionally associated with the jungle pool with a 3.62% pick rate. But this new position is undoubtedly taking the League of Legends community by storm.

The Nunu mid phenomenon began on July 6th when Lee “Faker” Sang-hyeok decided he was going to play the Yeti mid almost exclusively through his solo queue stream. The fad did not stop there either, as he continued to play it for several days. The results of this adventure are quite surprising; Faker beat Champions like Twisted Fate, LeBlanc, Pantheon, Corki and more in the mid lane. The sheer versatility he beat is a sign this Nunu is a secret weapon of his. At least that’s how SeolHaeOne Prince interpreted it, as they banned it against Faker in Game 2 of their best-of-three series in the LCK Summer Split.

Word has gotten around since Faker began playing it on stream. Lots of Western players have since picked it up with the likes of Rasmus “Caps” Borregaard Winther, Søren “Bjergsen” Bjerg, and Tanner “Damonte” Damonte playing him. So far, Nunu mid seems to be performing surprisingly well. Pro builds currently record 24 games of Nunu mid, with 17 games won. That is a 70.83% win-ratio using these statistics. Other players have also dabbled with him in the top lane, but this is even less frequent than the jungle pick rate. Faker dominates most of the picks of Nunu mid right now. In comparison to OP.GG’s statistics, the pick doesn’t look as hot. OP.GG conclude that the mid win rate is 49%, which means people are trying it and are finding balanced results.

The pick comes not long after Nunu received recent mid lane targeted buffs. Patch 10.13 saw Nunu receive buffs to his Consumes AP scaling with the damage increasing from 0.5 to 0.65 and the heal from 0.7 to 0.9. Furthermore, his Ultimate, Absolute Zero received some love too. Riot improved Absolute Zero’s shield with a 1.5 AP scaling on top of the unchanged health scaling. Riot intended for players to have some fun with some off-meta AP Nunu, and it seems to have become enough to warrant Faker playing him in solo queue.

Faker’s build involves taking Dark Harvest as the Keystone, followed by Cheap Shot, Eyeball Collection and Relentless Hunter while the secondary tree contains Celerity and Waterwalking. He then picks ignite and flash and builds Protobelt first item. This is then followed up with a Mejai’s Soulstealer if he is snowballing (no pun intended) and then tank items like Gargoyle Stoneplate, Dead Man’s Plate, Spirit Visage, etc.

The way he plays is to survive the laning phase and roam to the top and bottoms lanes effectively. The playstyle is familiar to the likes of Galio and Sion Mid, who aim to keep the pressure in the lane and roam to make plays with the team. Nunu’s mid lane role is the same as jungle Nunu, but he can benefit from the carry junglers like Graves and Lee Sin, which dominate the metagame. Whether we will see this come out in professional play is uncertain. Faker did not look to play it in his first game against SeolHaeOne Prince, and it was banned from him in game two. Maybe he will play it on the weekend vs Team Dynamic, who knows?

Champions That Are Reshaping The Regional Meta

Although, this isn’t the first time we have seen Nunu mid lane. Kim ”DoinB” Tae-sang experimented with the build in December 2019. He played it a little differently with the Predator rune selected and purchased the AP support gold item. This is just a reminder that off-meta meme builds exist, but its fun to see something like this come around from time to time. Here’s that one time he played it at All-Stars for fun before the pre-season kicked in.

Will a build like this stick around for long – maybe. However, even if it doesn’t, you should have fun with it while it lasts.