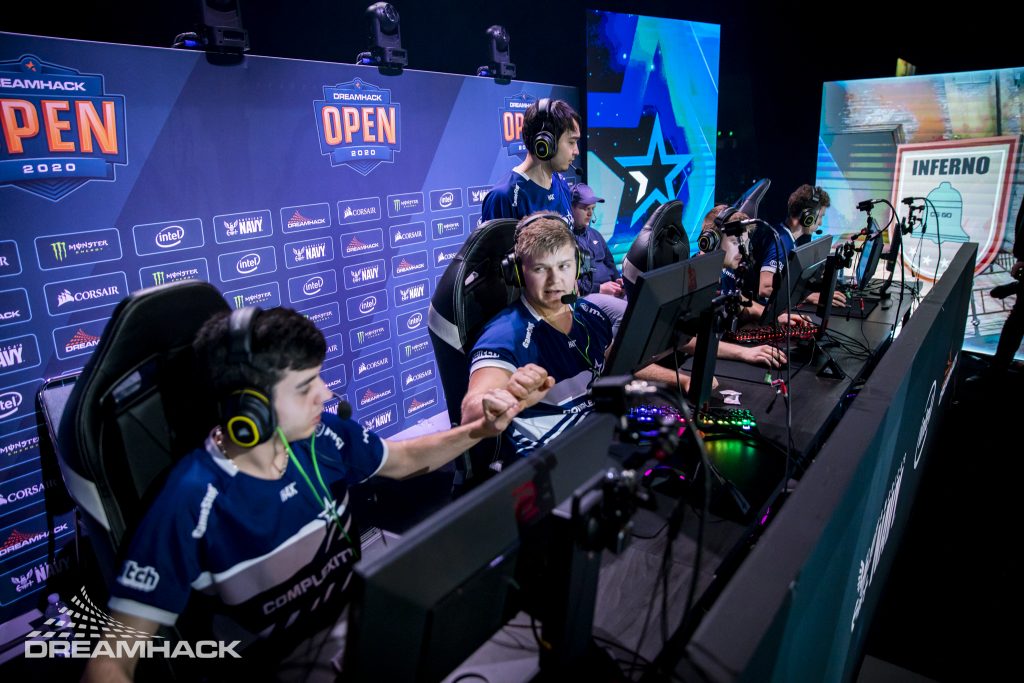 Complexity have advanced to the semifinals after a dominant performance. (Photo courtesy DreamHack)

The second and final day of DreamHack Open Anaheim’s group stage has come to an end. It was quite a long day of games full of overtimes and drama. North and Complexity remained in the final two advancement spots after defeating the elimination match winners. They will join FURIA and Gen.G in the playoffs.

The first DreamHack match of the day also turned out to be the longest one as Endpoint and forZe fought for their tournament lives. Map one on Vertigo was a sight to behold, as it took four overtimes to complete. The teams were inseparable during regulation, as both halves ended 8-7 for the T side. At the end of the second half, forZe looked to have control over the game, until Thomas “Thomas” Utting pulled off a game saving clutch to send them Endpoint to overtime.

Four nail biting OT periods later, Thomas broke the 50 frag barrier with a 4k to secure the map for the underdogs.

Inferno would be forZe’s pick, and it would pan out well for them. After a strong opening T side which included the first five rounds in a row, forZe pulled ahead. Although they gave up the first five rounds to Endpoint on their T side, forZe were able to stabilize on the defense. A dominating streak saw them win seven of the final eight rounds to secure the 16-12 victory and a tiebreaker map.

The final map of Train was thankfully the shortest map of the match. Endpoint began the map on the preferred CT side and ran away with the game. The first ten rounds in a row belonged to them, netting Endpoint a 12-3 halftime lead. Once their T side economy was in order, closing the match out was trivial. Endpoint completed the 2-1 upset over forZe to advance to the decider match.

Unfortunately for Endpoint, the magic would end as they matched up against North. Endpoint picked Vertigo once again, but the surprise was just not there anymore. After North put up a standard 8-7 CT side, they went on an offensive rampage. An 8-0 sweep in the second half allowed North to close out map one 16-7.

Dust2 on the other hand would be a much closer affair. Endpoint won all but one of the initial rounds, but then North’s T side started rolling. The Danish squad took nine of the final ten rounds to secure a 10-5 lead at the half. Endpoint were no slouches on the attack themselves. Whenever they won a round, they were able to chain it into multiple. Eventually, they took the lead going into the final three rounds.

North came roaring back to take a 15-14 lead, but Endpoint were able to push the match to overtime. That was all they had in them however, as North ended winning the map 19-17 for the 2-0 sweep.

The other DreamHack decider match in MiBR vs ENCE also went the distance. The first game took place on Nuke with MiBR starting on the favored CT side. The Brazilians put up a standard 10-5 defensive half. The real kick was their T side. Once MiBR’s economy was in order, they mercilessly attacked ENCE at every angle. MiBR took four of the last five rounds to end the map quickly 16-8.

Map two was MiBR’s pick of Train. ENCE’s defense looked much better this time, securing nine rounds in the first half. Still, MiBR were favored on their upcoming CT side. That would hold true early, as MiBR immediately closed the gap and took the lead after six rounds. After some round trades, MIBR took match point 15-13. ENCE pulled round 29 back and broke MIBR’s economy, sending the match to overtime.

The momentum would prove vital, as ENCE were able to sweep overtime and win the map 19-15.

The final map was Overpass. MiBR started on the CT side but had trouble early. Despite this, they were able to pull back the last four rounds for a 9-6 lead. ENCE won the second pistol round, but MiBR instantly took control of the map with a five round T win streak. ENCE did fight back with four straight rounds, but MiBR was just too far ahead. They closed out the map 16-11 and advanced to face Complexity.

Complexity vs MiBR was the final match of the day, and also the quickest. Map one was MiBR’s Nuke pick. Complexity started on the CT side and ruined MiBR’s day. An indomitable defense led to a 14-1 half from Complexity. The second half only saw three rounds before they ended the map 16-2. Star AWPer Valentin “poizon” Vasilev earned an insane 2.17 rating and 140.6 ADR.

Complexity’s Dust2 pick started off dominant as well. Their T side attack was clean and consistent, resulting in ten rounds in the first half. Despite losing the second pistol, Complexity turned the tides in the next round. They took five CT rounds in a row to go on match point. The close out came shortly as Complexity completed the 2-0 with a 16-9 win.

The top four at DreamHack Open Anaheim have been confirmed. Gen.G, FURIA, North, and Complexity have all moved on to playoffs. The action continues Sunday with the semifinals and finals both taking place. The $50,000 first place prize and a spot at DreamHack Masters Jönköping are on the line.