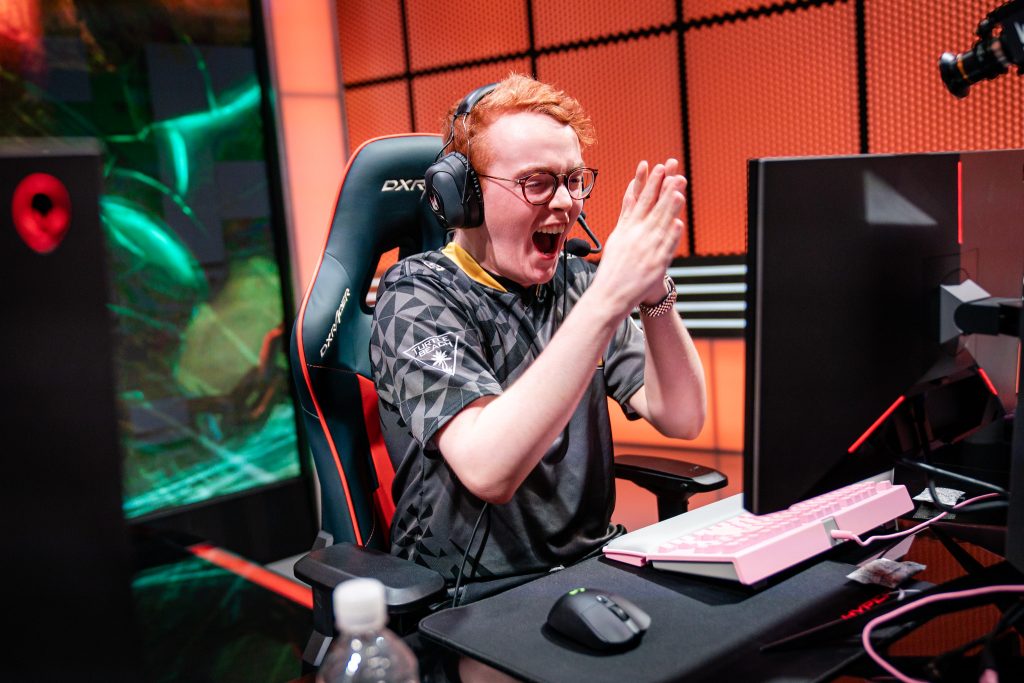 After 4 weeks of play, the LEC standings are showing a clear line between the top and bottom teams. Among the top, Spylce currently sits comfortably in third with a 6-4 standing. After taking down the undefeated Fnatic this past weekend, the team is on course for another playoff run.

Hotspawn sat down with Tore Hoel “Norskeren” Eilertsen to talk about Splyce’s current winning form, growing up watching NA streamers and how the team is hungry for a World Championship spot.

Congratulations on achieving a 2-0 week. In your game against Fnatic, you drafted Nautilus against the Rakan. Can explain why you chose the champion?

We decided there are a lot of counters to Rakan, the best one being Lux but they decided to ban it. We could have picked it early but we decided to prioritize other champions and let it drop. They had a really bad team comp against CC and Rakan isn’t good against Nautilus, it’s easy to hook him. Also, Hylissang tends to step up a lot of the time, which he did this game. Nautilus is a good champion against him and Rakan in general.

Splyce currently sits in third place in the standings. Is there anything specific you guys have been doing which has resulted in your winning form?

We have kinda just grown as a team during the split and over the break. I feel like I have been stepping up. I feel like a better player. As time passes by you get better, especially if you have a good coaching staff, and we have that. Me and Humanoid are improving a lot, like every day. Also, since we are the youngest players we are the ones who take on most of the feedback and improve.

Also for me, I really got a motivation boost this summer because we have a chance to go to Worlds. We already did okay against Fnatic in the last semi-finals and we beat them today so anything is possible. Also, It’s a bit of a cliché to say, but it has always been a dream for me. I don’t only just want to play in the LEC. I am working really hard for it and I’m just really motivated. It’s what keeps me up playing till late at night.

So, with regards to securing a place at the World Championship, is that something the team is fully focused on?

I think everybody, especially our coaching staff, is reminding us that we have a good chance of going to Worlds. So if someone is showing like signs of no motivation, it’s really easy for us to get motivated as it is a possibility for us. It’s not like we are a sixth-place team, we are top three or even top two. If we do get top two in the regular season it works well with the current system.

We are really hungry to get the victories and show how good we are. I think we were neglected the last split. We feel like we didn’t get the recognition we wanted. I don’t know if its because we played a more control or boring style. I understand it though, especially if you compare with this game where it was really explosive and fun to watch.

Are there any regions that you are currently watching and that you look to for inspiration?

I usually watch some NA teams. I have a connection to them as I grew up watching NA streams when I was around 12 or 13. I used to watch both Scarra and Bjergsen stream. I thought they were both really funny. I guess back then the EU streams were not as entertaining. I also watched a lot of NA LCS, the personalities were a bit more fun, TSM especially. Now if I do watch NA it’s normally TSM, Cloud9 or Team Liquid, but only when they play each other.

With LPL and LCK, I watch more for learning. Both regions are currently playing the “G2 Style” right now, a bit more wild and crazy. Teams like Damwon Gaming, Kingzone DragonX and Afreeca are the most interesting games to watch, oh and of course Griffin as well. I feel like they saw how G2 played at MSI and took that on. It is a great way to play because, as the enemy, it’s hard to prepare when you are always against new picks. I feel like watching LPL and LCK is good if you want to improve and watch quality games.

Competitive play has now moved onto 9.13, are there any support champions you have found to be strong?

Yuumi is definitely the strongest champion. I liked playing her at first but now it’s just really boring. The champion is just so poorly designed. I don’t think it’s a champion that should be in competitive, along with the likes of Zoe and now Qiyana. I think Yuumi and Lux are the top two supports right now, along with Tahm Kench even after he was nerfed.

Do you have a favorite support meta that you would like to see return? For example like the Ardent Censer meta?

I started playing professionally in summer 2017 when I qualified for LCS (now LEC) with Schalke, and that was during the Ardent Censer meta. It’s kinda boring to play but I guess since I was a new player it was kinda easy for me. I didn’t really do much, just shielded all the time, so I don’t really want that meta back.

I am really enjoying the meta right now. It’s really fun and it has been that way since about 2018 when the bot lane meta shifted into mages and bruisers. I remember a time when ADC got nerfed and it was so stressful because we were playing champions like Maokai, Swain and Volibear in the bot lane. However, the meta is good right now because you can play both types of champions.