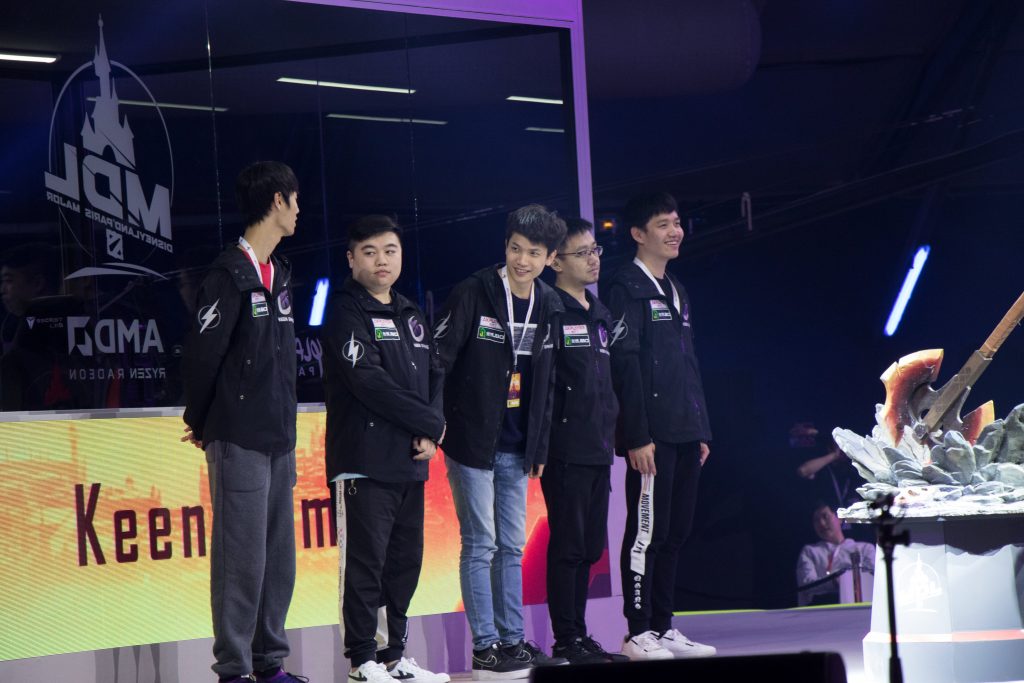 There'll be no "Sword in the Stone" moment for Keen Gaming, who were eliminated today at the MDL Disneyland® Paris Major. (Image via @Keen_GamingCN / Twitter)

Dota 2’s MDL Disneyland® Paris Major had four elimination best-of-three series today. None of the results of those matches were surprising; some series were closer than others, but none of them ended in an upset.

But first, after a day off, the tournament has transitioned to the main stage: Disney® Events Arena in Paris, France. We’re here for the Dota, but the signs of Disney® are, delightfully, everywhere

The day opened with some excellent content pieces. One was a tour of some significant Parisian sites. The other was an Axe-focused video that you have to watch to believe. It includes plenty of Disney references and showcases the team logos in a truly delightful way. The tournament continues to find ways to nod to the Disney location, from set pieces to the music between series. My personal favorite, after that incredible opening, was the Disney-fying of the Team Liquid horse in their intro piece.

As for the series themselves, well… The four lower bracket games were over very quickly. PSG.LGD versus Complexity Gaming, Virtus.pro versus Mineski, Team Liquid versus paiN Gaming and Vici Gaming versus Keen Gaming were all 2-0 affairs. The higher ranked team won in each case. Complexity Gaming, Mineski, paiN Gaming and Keen Gaming all go home in 9-12th place, with $15,000 USD and 150 DPC points each.

Helen Xu has continued to do great work post-series, conducting interviews and translating on the fly for both English and Chinese audiences. The broadcast team has rotated between the analysis desk and casting to keep things feeling fresh, despite the long day.

Tomorrow, we’ll have another long one with four more best-of-threes. We’ll get to see PSG.LGD versus Virtus.pro and Team Liquid versus Vici Gaming in the lower bracket, and then Team Secret versus OG and Evil Geniuses versus Ninjas in Pyjamas. Every single one of those matches is must-watch.

Tune in starting at 4:00 am EDT at Twitch.tv/mdldisney.