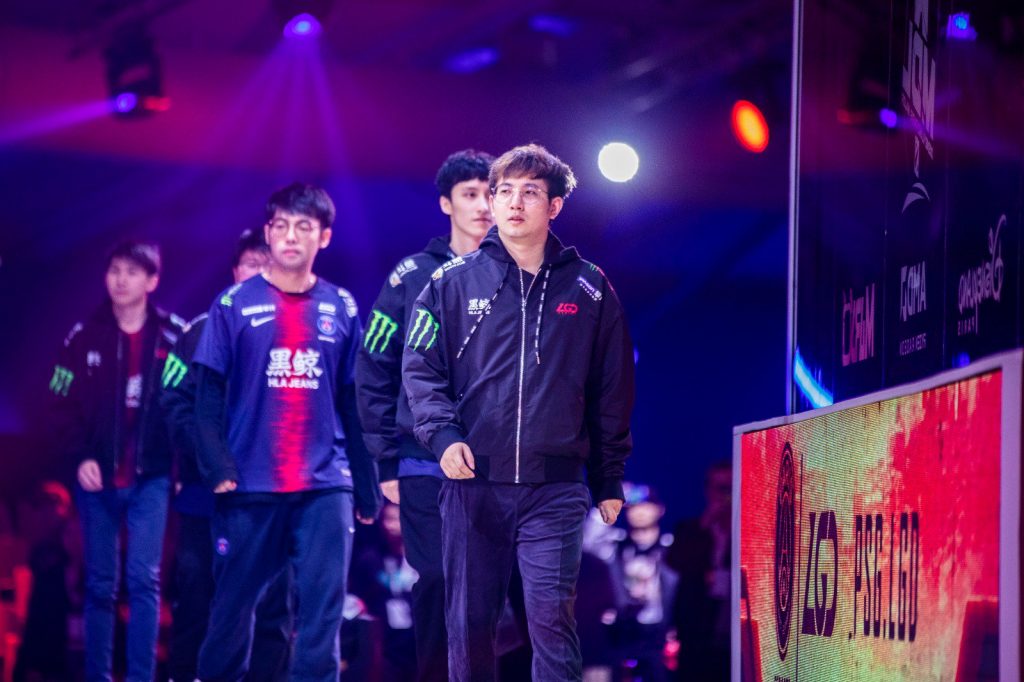 PSG.LGD go home after an impressive series versus Team Liquid at the MDL Disneyland® Paris Major. (Image courtesy of PSG.LGD)

The penultimate day of the MDL Disneyland® Paris Major has come and gone. It was a fantastic day of Dota 2, with four best-of-three series, all of which went the full three games.

The two lower bracket series, OG versus Team Liquid and Ninjas in Pyjamas versus PSG.LGD were both reverse sweeps. OG and NiP won the first game of their respective series only to lose two in a row. They both exit the Paris Major in fifth-sixth place, with $60,000 USD in their pockets and 900 Dota 2 Pro Circuit points.

With this placement, NiP has secured their invitation directly to The International 9. They currently sit in seventh place with 2470 points. OG is less secure in tenth place with 948 total points.

The third series of the day was the upper bracket finals: Team Secret versus Evil Geniuses. Game three of the series is well worth a watch. The first two games were fairly stompy with first Team Secret and then Evil Geniuses taking control and never letting go. But the third game was a lot more even, with some back-and-forth play that only hinted at how

Series of the Day: Team Liquid vs PSG.LGD

However, the best series was the last one of the day. PSG.LGD and Team Liquid were both determined to stay in the tournament. After Team Liquid took game one, it looked like they might take game two as well. However, PSG.LGD were having none of it. Xu “fy” Linsen on Earthshaker was chosen as the MVP for the match, and it was well-deserved. His Fissure plays were on point.

So many tense moments in the match between @PSGeSports and @TeamLiquid. The score is now even as LGD take Game 2 with their late-game Medusa powerhouse. Liquid put up a good fight but came up just a little short. Let's see if the final match of the series is just as close! pic.twitter.com/pXbipZnZc3

The third game in the series started at midnight local time; too appropriate for Disneyland®? The Earthshaker was banned in the first phase, though PSG.LGD. They had faced an impressive Maroun “GH” Merhej Earthshaker in game one, and thus had good reason to remove the hero from the pool.

Team Liquid took the lead early on, bolstered by a stellar performance by Amer “Miracle-” Al-Barkawi on Templar Assassin. PSG.LGD did not make it easy on them, taking some impressive fights from behind, including a battle in the Roshan pit that resulted in PSG.LGD stealing Roshan, though Miracle- was able to secure the Aegis. Ultimately, Miracle- was really able to snowball out of control, and Team Liquid steamrolled their way to the win.

PSG.LGD goes home in fourth place, with 1350 points and $80,000 USD. They’ve secured their invitation to The International 9 with 4140 points, in fifth place of the DPC rankings.

Team Liquid advances to the lower bracket finals, where they have a rematch versus Evil Geniuses. The two met earlier in Paris during the first round of the upper bracket, when Evil Geniuses won 2-1. Team Liquid has also secured an invitation to TI9 by ensuring they’ll receive at least 2100 points due to their placement at this Major.

Tune in tomorrow for the lower bracket finals, and then grand finals, when the winner of the first match will duke it out with Team Secret for the trophy.