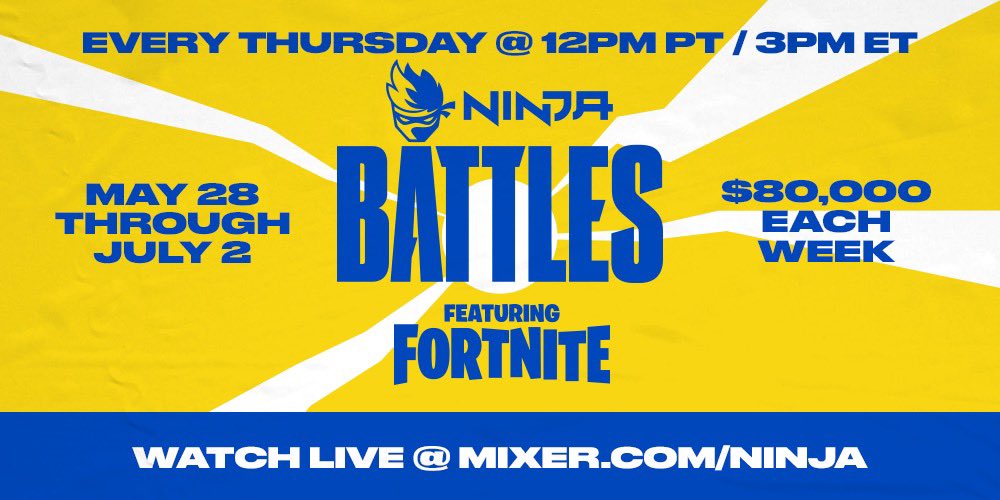 The king of Fortnite is hosting six events throughout the next three months. (Photo courtesy Ninja)

Ninja Battles will feature 60 of the best Fortnite players in the world fighting for their piece of the $400,000 prize pool. Several big names have already confirmed their participation such as Bugha, NickEh30, Ewok, NateHill and Reverse2k. The full roster will be released closer to the event.

Popular Fortnite casters MonsterDface and Ballatw will provide commentary for the series.

Ninja explained his excitement about the series and how it pushes the boundaries of Fortnite content:

“I joined Mixer to push boundaries, create different types of streaming content and interact with fans in new ways. Ninja Battles’ brings a new kind of gameplay to the community. I am excited to share this competitive experience with my fans, as well as have my fellow gamers and friends participate.”

The new series is in collaboration with Ninja’s management company Loaded which represents other big names such as TimTheTatman, Shroud, and Summit1G. The series is a big win for Mixer who has secured several big names such as Ninja and Shroud but has still yet to attract a huge following. Ninja Battles will hopefully attract more fans to the platform throughout the series.

The series starts on Thursday, May 28th at 2 PM CST. New episodes of the series will air weekly at 2 PM CT.

Fans can watch the new competition on Ninja’s Mixer channel, but each competitor can also stream their perspective on their own channels.